Back in 1955, the late Morris K. Jessup's book, The Case for the UFO, was published. It was a book that delved deeply into two key issues: (a) the theoretical power-source of UFOs, and (b) the utilization of the universal gravitational field as a form of energy. Not long after the publication of the book, Jessup became the recipient of a series of extremely strange missives from a certain Carlos Miquel Allende, of Pennsylvania. In his correspondence, Allende commented on Jessup’s theories, and gave details of an alleged secret experiment conducted by the U.S. Navy in the Philadelphia Naval Yard in October 1943. Thus was born the highly controversial saga of what has become known as the Philadelphia Experiment.

According to Allende’s incredible tale, during the experiment a warship was rendered optically invisible and teleported to - and then back from - Norfolk, Virginia in a few minutes, the incredible feat supposedly having supposedly been accomplished by applying Albert Einstein’s never-completed Unified Field theory. Allende elaborated that the ship used in the experiment was the DE 173 USS Eldridge; and, moreover, that he, Allende, had actually witnessed one of the attempts to render both the ship and its crew invisible from his position out at sea on-board a steamer called the SS Andrew Furuseth.

If Allende was telling the truth, then the Navy had not only begun to grasp the nature of invisibility, but it had also stumbled upon the secret of teleportation of the type demonstrated – decades later, in fictional, on-screen format - in Star Trek and The Fly. On these very matters, Allende made the disturbing claim that not only did the experiment render many of the crew-members as mad as hatters, but some, he said, even vanished – literally - from the ship while the test was at its height, never to be seen again. Others reportedly suffered horrific and agonizing deaths. 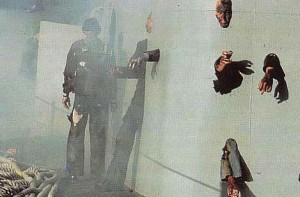 Of course, as students of this very weird affair will know, the tale of Allende and the vanishing ship (or non-vanishing ship, depending on your perspective!) has been denounced as much as it has been championed. But, few are aware of the U.S. Navy's official stance on the matter. Many assume - quite incorrectly - that the Navy's position is that nothing whatsoever occurred at all. But their assumptions are wrong.

Contrary to what you might think, the Navy does believe the story has a basis in fact - albeit of a far more down to earth nature.

While there is certainly no official endorsement of the stories that the USS Eldridge was rendered invisible in October 1943, that it was teleported from one locale to another and then back again, or that crew-members were injured, killed, or outright vanished into oblivion, the Navy does admit that, in all likelihood, the story has a basis in something of real, secret significance.

The Navy’s current position reads as follows: “Personnel at the Fourth Naval District believe that the questions surrounding the so-called ‘Philadelphia Experiment’ arise from quite routine research which occurred during World War II at the Philadelphia Naval Shipyard. Until recently, it was believed that the foundation for the apocryphal stories arose from degaussing experiments which have the effect of making a ship undetectable or ‘invisible’ to magnetic mines.”

Degaussing, in simple terms, is a process in which a system of electrical cables is installed around the circumference of a ship’s hull, running from bow to stern on both sides. An electrical current is then passed through these cables to cancel out the ship’s magnetic field.

“Degaussing equipment,” says the Navy, “was installed in the hull of ships and could be turned on whenever the ship was in waters that might contain magnetic mines, usually shallow waters in combat areas. It could be said that degaussing, correctly done, makes a ship ‘invisible’ to the sensors of magnetic mines, but the ship remains visible to the human eye, radar, and underwater listening devices.” 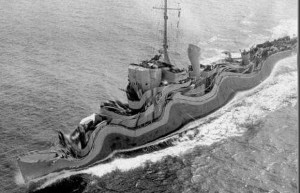 Just to confuse things, however, the Navy has offered a further theory, too, to explain what might lie at the heart of the story:

That the Navy first denounced the Philadelphia Experiment as having any basis in reality, but today is seemingly happy to offer no less than two theories to explain what might have been behind the legend – involving verifiable, secret projects - has inevitably raised suspicions that we are still not being told the full story of what really occurred all those years ago at that mysterious naval yard, regardless of how one views the strange saga of Carlos Allende.