Fearful Forteana From the (Not-So) Fringe

It always happened late in the evening: Pennsylvania motorists driving along the dim roadways of State Route 351 would see a strange, darkened figure ahead in the distance, ambling along the side of the road with a peculiar, fumbling sway to his stride. Drawing nearer, it's only natural for one's eyes to gravitate toward the face of a stranger, perhaps with hope that the individual will be revealed as a familiar acquaintance; an old friend, or a neighbor perhaps.

But on such occasions, particularly throughout the '60s and '70s, such late-night motorists were often shocked as the man they approached, drawing within a few feet of the poor soul, actually had no face at all. Had he been a ghost, or perhaps some denizen of the goblin realm? In truth, the man in question was likely Raymond Robinson, a craft maker from the town of Koppel who, early in life, had nearly been killed in an electrical accident. The scarring and injury he sustained had been so bad that he lost both eyes, his nose, and an arm. However, this never seemed to prevent Robinson from taking late evening walks by the side of the road, and thus, the legend of Pennsylvania's "Green Man" was born.

In truth, many stories that border along the strange and unusual have their beginnings in this way, in that they often have an underlying story that is rooted in fact; however, simply because there is "truth" to the occasion does not always mean it's the ordinary kind. 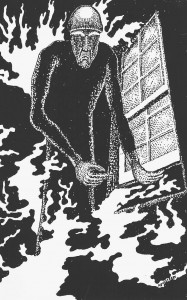 Another strange and seemingly quasi-human character that has often made its way into collections regarding the supernatural and the unexplained is that of the "Mad Gasser of Mattoon." This involved a series of strange "attacks" that took place over a decade between 1934 and 1944, between the states of Virginia and Illinois, in which a shadowy character had allegedly been using some variety of noxious gas to harm people in their homes by leaking it through open windows and other small openings. Witnesses often described the character as having worn a dark, tight fitting suit and cap that, in retrospect, gives him a slightly alien appearance. In fact, well-respected Fortean Jerry Clark even commented on popular depictions of the Gasser in 1993, noting that one image in particular had "(depicted) him as a not-quite-human, possibly extraterrestrial, being." Despite such attributes being given to the character, one of the best theories proposed regarding the Gasser's identity (and thus sparing readers the good old "mass hysteria" solution attributed by skeptics to every Fortean connundrum) was offered by researcher Scott Maruna, who speculated that a mentally disturbed college student named Farley Llewellyn had been a likely candidate. Furthermore, Maruna also guesses that Llewellyn may not have acted alone, and could have been assisted by his two sisters, Florence and Kathryn (lending credence to a few reports, where the Gasser was described as looking very feminine. 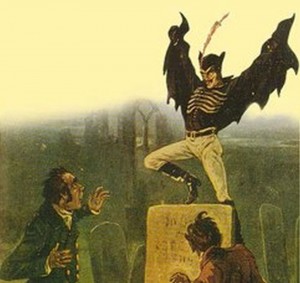 Similar urban legends seem to have been heaped around that character known as "Spring Heeled Jack," a leaping fiend who allegedly began terrorizing London residents in 1837. While there is little doubt that someone had indeed been frightening people by the cover of night in London at the time, the character's frightful appearance, often described as being devilish or demonic, no doubt led to exaggerations about the being's actual ability to scale walls that were several meters high in a single bound. And yet, there are many reports from the period that seem to describe such behavior as though they had been witnessed on occasion by officials and others in society who would have been considered reliable witnesses. With nearly two centuries having passed since the leaping devil of London first appeared, it would be difficult indeed to test the veracity of such claims in the modern day.

But the underlying factor here seems to be, in many cases at least, that when the appearance of a strange being or circumstance is presented, the mind of the various witnesses often seems to reflect or superimpose some of the oddity in retrospect. Take for instance one final case, which involves a fiend known as "The Grinning Man." The incident, originally reported to John Keel, took place in1966 near Elizabeth, New Jersey. Two witnesses, Martin Munov and Jimmy Yanchitis, claimed that they witnessed a tall figure, clad in a green jumpsuit, who grinned at them rather ominously: 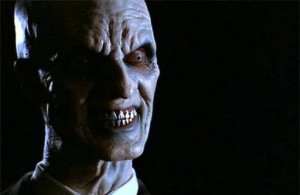 Aside from the large physical stature, however, there was little else about this character that seemed to convey evidence of an extraterrestrial being, some fiendish monster from the cavernous hollow earth, or any other variety of paranormal entity. Then again, the fact that a strange, grinning man of tremendous proportions had been lingering near a fence and watching two young men is a bit odd, if not unsettling all unto itself. Bottom line, there does seem to be an underlying tendency to take unexplained circumstances that are otherwise fairly "average" in nature, and when a lack of information to complete the story is apparent, speculation takes the story fragments and skyrockets them into the stratosphere! And all the while, there may not have been aliens, monsters, or unexplainable entities of any variety to begin with!

Granted, there are still a handful of circumstances that are so strange that they can't be cast to the wayside quite so easily... who knows, maybe there are a few otherworldly bogey men out there, after all.

UFOS: The Way Newspapers Used To Do It