The Legend of Workman Chapel

The crumbling one-room chapel sits just off a gravel road in the north-west corner of Missouri, surrounded by cornfields, and shadowed by gnarled trees. Pastor John Workman built this chapel in 1901. Sometime in the 1950s, the area farm families that worshipped  wed, and mourned in this small white building for decades, gradually moved to the growing nearby cities. The chapel soon fell into disuse, the adjacent cemetery once a community burial site, is now only the future resting place for the few Workman family members who still dot the area.

It’s also a place of legend. Internet descriptions paint this place as more haunted than the Stanley Hotel and creepier than the Waverly Hills Sanatorium. A preacher stabbed to death a woman in a white dress and hid the murder weapon beneath the floorboards. A woman was hanged from one of the great, old trees, and greets visitors by dragging booted toes across the top of any car parked under it. A bearded giant in a flannel shirt wields an axe to chase off interlopers.

Sounds scary. Of course, the legends are urban. 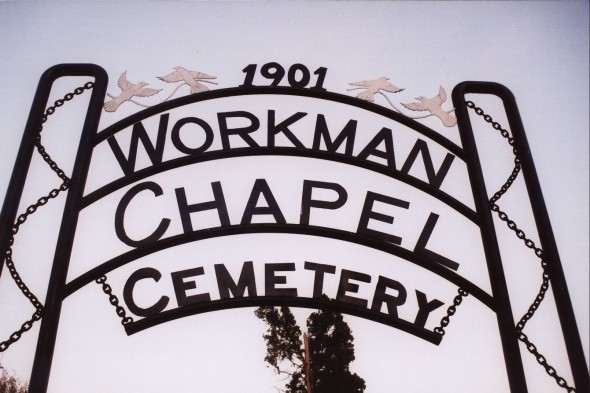 John Workman’s descendent Lester Workman was caretaker of the chapel and cemetery until his death in 2011. “There’s supposed to be a murder or hanging out west here,” Lester told me in 2006. “I don’t know whether there was or whether there wasn't ” After a little research, I discovered Lester was right, no murder, no hanging, and no screaming lumberjack. Most old, abandoned buildings, and lonely cemeteries host similar legends. But at Workman Chapel, well, something’s going on out there.

People have reported seeing Civil War soldiers on horseback in the cemetery. According to Lester Workman, two are buried there. Others have only heard the horses – like Jessica Lavicky a few weeks before Halloween in 2004. 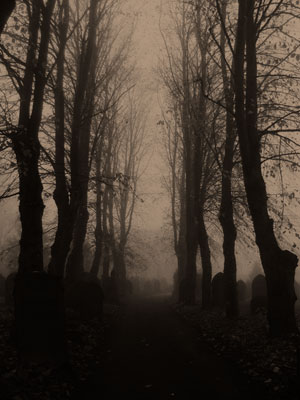 “I went out in the afternoon with a friend of mine about 3 p.m.,” Lavicky said. They were staking out the site for a haunted excursion after dark. “We took the dog with us. We walked down to the cemetery and the dog started running back and forth like it was playing with somebody. But it wasn't playing with us.” Church bells clanged while they stood amongst the headstones, but they couldn't understand why – there is no bell at Workman Chapel.

Then they heard the horse. “We heard horse’s hooves,” she said. “We heard it in the front of us and beside us. I thought it was from a field, but there were no horses there.”

Tombstones rise like molars from long grass outside Workman Chapel, a black, wrought iron gate holding them back from the chapel grounds. I pulled into the dirt drive from a gravel road, my headlights grazing the peeling white paint, and the blank holes in the chapel that used to hold windows and doors. I’d talked with people who heard whispers in this empty chapel while they were alone, and seen shadows on the walls, to make me cautious. Good thing I wasn't alone.

Will Murphy, video engineer at nearby Northwest Missouri State University where I teach journalism, and I had carloads of college freshmen with us. It was okay; they had to write a paper and this counted as a field trip.

“Black human shapes have been reported dancing on the tombstones,” I said as we stood around the cars, Murphy’s sitting underneath one large oak with low branches. He’d given the freshmen the speech about the hanging. Too bad the legend didn't specify which tree the mob hanged this poor woman from. 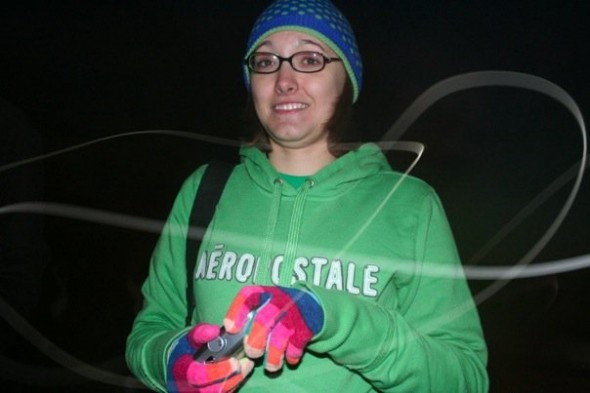 Bats fluttered around the ceiling of the chapel as the group stepped inside, over the ripped-up floorboards, and onto the creaky remnants of the sanctuary. Spray paint littered the room, “Leave,” along one wall, “Arabian” spelled incorrectly on another. A large black ceremonial circle lined with votive candles probably purchased from Wal-Mart was painted on the floor marked with writing in glyphs I couldn't understand, although I suspected they came from the jacket of Led Zeppelin IV.

“What do you think they used that for?” one of the freshman asked.

“Probably to get laid,” another answered.

Whatever they used it for was irrelevant. I warned the freshman not to step in it; playing with the supernatural is not a joke.

Students armed with a voltmeter left the chapel and wandered the cemetery; others followed with cameras and audio recorders.

“Some people think the energy ghosts use to manifest can be measured electrically,” Murphy had told them when he handed off the voltmeter, not mentioning the overhead power lines that ran over the cemetery.

Not helping any, I told them the story of the jumping shadow. 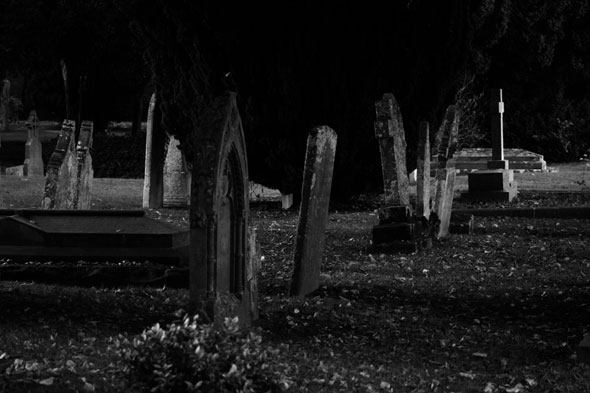 Josh LeMar, a former Northwest student, visited the chapel one night in high school, and saw something he wished he could forget. “We took a bunch of the freshman girls out there and we had the intentions of scaring them,” LeMar said. “We were going to give the code word and all the guys were going to jump in the cars and leave the girls there and come back in about 15 minutes or so.”

The boys did, but they accidently left one of their buddies behind.

“We waited about 15-20 minutes and we pull in and see Bobby, the guy we left behind,” LeMar said. “He was upset.” Bobby asked who else they’d left in the cemetery, but Bobby was the only one they left behind. “He said ‘There’s somebody out in the graveyard jumping around the headstones,’” LeMar said. “He’d seen somebody jumping from headstone to headstone and hiding behind them. We loaded everyone up in the cars and got out of there right away.” 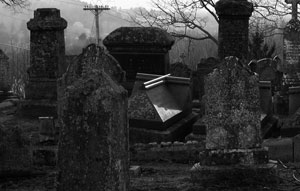 Then-college newspaper reporter Dominic Genetti accompanied us on our ghost adventure. “When we got there I was kind of keeping an open mind,” he said. “I was on assignment.” But Genetti also wanted to see if anything ghostly was going on at Workman Chapel. He laid his audio recorder on a grave-site near the gravel road, a good distance from the wandering freshman. At the end of the night, he retrieved the recorder. The sound it picked up was shocking.

“About eleven minutes in you could hear the kids kind of talking in the background, and then as soon as they went away, you could hear this galloping sound,” he said. “It really sounded like a carriage on gravel. At first I couldn't believe it. Did we actually capture something?”

The galloping sound lasted a few minutes and faded out, but it left a lasting impression on Genetti. “There was clearly something there trying to give me proof and it did. It sounded like a team of horses running on gravel. It kind of proved there is a legend to haunted cemeteries. It certainly gives proof there’s something out there getting people’s attention.”

At the end of the night a photographer snapped three consecutive photographs of a student standing just outside the cemetery grounds. The first and third were nearly identical, holding just the student, but the middle picture, taken less than a second between the other two, shows a white ribbon dancing in front of her, and disappearing behind her.

Then we left. No murder victim, no hanging, no axe-wielding maniacs, but we had proof something otherworldly was happening at Workman Chapel.

The Strange Saga of the Vanishing Cars