Is poltergeist activity, those unexplained noisy bangings and rappings on walls and inanimate objects like furniture, toys and stones flying through the air, levitating or materialising from nowhere, the result of troublesome ghosts or evil spirits?

Or, does it have more to do with the pent-up psychic energy of lovelorn, rebellious and frustrated teens with hormones coursing through their veins and manifesting in the form of telekinesis. Three Australian cases of poltergeist activity appear to support the view that rather than troublesome ghosts and evil spirits, it may be more a case of teen angst and telekinesis.

The Guyra Ghost is arguably Australia’s most famous case of poltergeist activity, and appears to be the first Australian case in which the term poltergeist was actually used to describe the phenomena.

It all began in a small weatherboard cottage in April 1921 when the Bowen family of Guyra suddenly began experiencing “tremendous thumpings” on the walls of their home. Soon after the thumping sounds began, the Bowens were subjected to destructive showers of stones. Upon investigation, the Bowens found there to be “no human agency” involved in the wall banging and stone throwing. 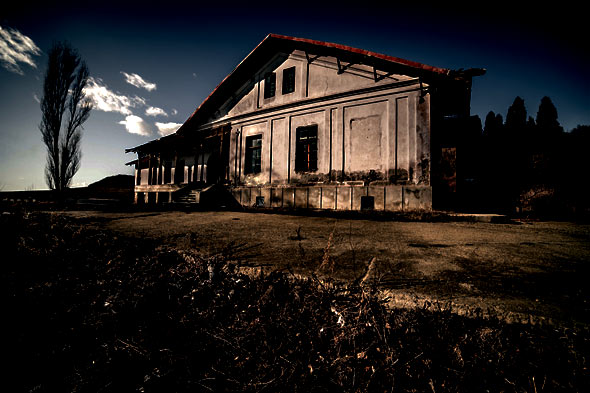 As the unexplained activity continued, it soon became clear to the Bowens that their young daughter, Minnie, appeared to be the target of the supernatural happenings. Wherever Minnie went within the house, the “tremendous thumpings” accompanied her. Stones would crash through her bedroom window, landing on her bed.

In a Sydney Morning Herald article about the Guyra Ghost written in 1954, young Minnie was described in rather unflattering terms as “a thin, dark, little girl with an impassive face” and academically as “not very clever” and that she was “backward for her age at school”.

“On the night of April 15 Minnie sat in a well-lighted bedroom, watched by two police officers and a number of other people. Outside ‘in weak moonlight’, 50 men patrolled the silent fields.

“About nine o’clock the silence was shattered by a loud knock on the bedroom wall, followed by two further thumps. Their force was such that the entire building shook. The women inside the house were white with fear, but Minnie remained impassive.

“A Mr Davies, who was interested in spiritualism, suggested to the child that she should ask a question, and she immediately said, ‘Is that you, May?’ naming her half-sister who had died some months before. Observers heard nothing, but Minnie claimed later that May had said to her, ‘Tell mother I am in heaven, and quite happy. Tell her it was her prayers which got me here, and I will look after her for the rest of my life.’”

Was Minnie actually communicating with her dead half-sister, or was she telling Mr Davies, and her mother, what she thought they wanted to hear?

As the stone throwing and wall banging continued, Minnie’s parents were at their wits’ end and so sent their daughter off to stay with her grandmother, 60 kilometres away in Glen Innes. But what had now been dubbed the Guyra Ghost, now made its presence felt in Glen Innes in the home of Minnie’s grandmother.

The Guyra Ghost had followed that “thin, dark, little girl with an impassive face”.

In early 1887, the Large family, living on a remote property at Cooyal, near the central west New South Wales town of Mudgee, was terrorised by an inexplicable nightly rain of luminous stones falling, and sometimes floating, inside their house. 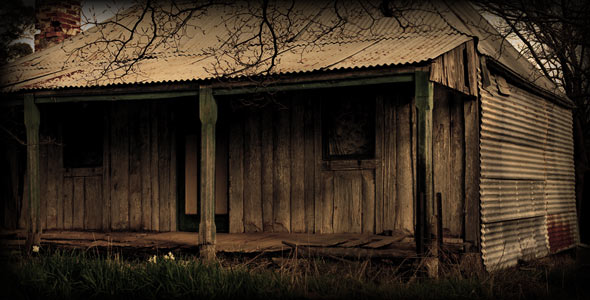 On 3 March 1887, the Kilmore Free Press reported that: “A farmer named Large has reported to the police that, for several nights, himself and family have been terrified, in consequence of stones, some weighing one pound, continually dropping inside the house, apparently dropping through the roof.”

Before long, news spread throughout the district of the Cooyal Ghost with visitors turning up at the remote homestead to witness the inexplicable occurrence for themselves.

“All who have visited the place, seeing for themselves, the police included, persist in applying what they regard an appropriate term ‘ghostly missives’ to the huge stones, which have dropped into the house when both doors and windows have been secured.”

In this case, the mother of the family bore the brunt of those “ghostly missives”. 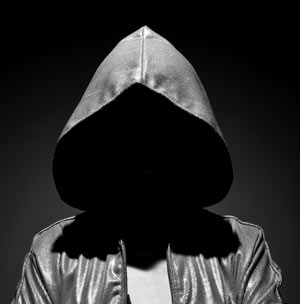 “The effect on the poor woman, Mrs Large, who feels that she is the victim of some awful vengeance is most alarming. At times, while the missiles are falling around her, deathly chills affect her whole system and almost prostrate her.

“On one evening, fearful to: remain indoors, the poor woman sought a quiet spot outside the house, but, strange to say, several large stones dropped close to her, whilst one, although falling on some part of her, left no mark – in fact was hardly felt. A cold deathly chill then crept over her and she had to be taken to the fire, but this did not restore warmth to her system.”

Mrs Large explained the phenomena to a reporter from the Ballarat Free Press and Mining Journal who visited the family’s home.

“It was not stone-throwing, but stones falling, the stones coming so it seemed, through the roof, at times appearing to float in on the air, and while floating looked white. When the stone fell on the floor, it fell with a dull thud, and looked black.”

When the stones struck either her or one of her children, it was “as though a small bag of feathers struck them”.

It is perhaps when the “ghostly missives” first made their appearance that may hold the key to the true nature of the Cooyal Ghost.

The Ballarat Free Press and Mining Journal recounted the events of that first night.

“On the first evening of this strange manifestation, Mr Large was returning home with a bag of flour on a pack horse, and on approaching the house the animal stood still, apparently afraid to move towards the dwelling. After no little persuasion, with much pulling, the terrified steed was got to the door. With difficulty he was unpacked, and an altogether unusual thing for the beast to do, he bolted as though maddened, careering in every direction except near the house.

“This set the family wondering. Just then, for the first time, the stones commenced dropping in the house. Mrs Large at once concluded some of the young people having a lark with her in revenge for her refusal to permit a dance being held there that night.”

Was one of the children, unconsciously taking their frustrations out on their mother, the cause of the floating stones?

Poltergeist in the milking shed

In the summer of 1949, Laurie Wilkinson’s milking shed, of all places, was the setting for a strange case of poltergeist activity in which metal plates from Laurie’s milking machine began to inexplicably fly off and out of the shed. When tied down, the milking machine would twist and contort. Tin cans floated and spun in mid-air. And on one occasion, in front of intrigued locals, Laurie’s 15-year-old son, Robin, began to move one of the plates with an iron bar when the bar was suddenly wrenched from his hands and became embedded in the concrete floor while the plate was flung 200 yards away. 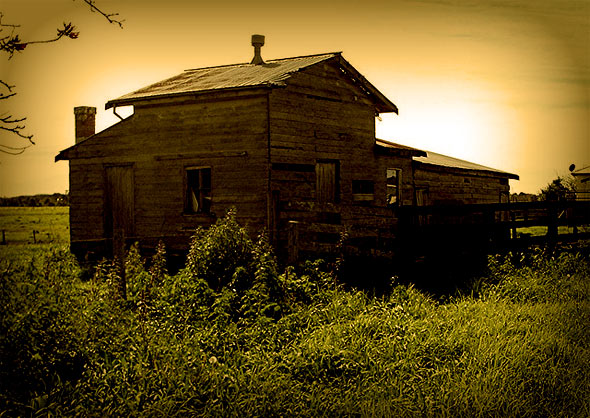 “I saw it, but I wish to God I had not seen it. It is frightening. There’s no reason so far as I can see why this should happen, and I’m a mechanical man. I wish I’d never seen it because it disturbs me greatly.”

Another witness to the poltergeist in the milking shed, who visited the farm regularly, described another encounter.

“Mr. Wilkinson walked into the engine-room and turned off the engine. He had only just left the engine-room when an empty one-pound grease tin, which had been standing on the top of the vacuum pump, began to rise slowly in the air. We saw it spinning as it rose. It cleared a six foot wooden partition … then turned and fell with terrific force to the ground about 18 inches from where I stood.

“A peculiar thing about it was, that it seemed much bigger than it really was – as big as a football. I suppose that was because it was spinning diagonally. We were so astonished we thought we’d see what would happen to an empty 50-cigarette tin. We put it on the top of the moisture trap of the vacuum pump. A minute or two later it also rose over the six foot partition.” 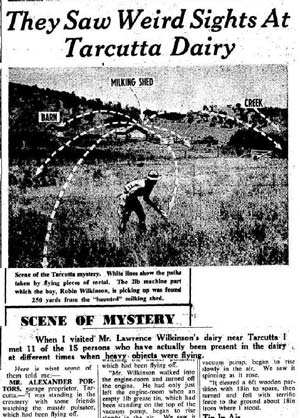 Eleven months after the plates first began flying, the mystery remained unsolved and the disruption to the daily milking routine at the dairy farm continued. Speculation on the cause of the mystery ranged from black magic and evil spirits to a new theory of gravitation.

A member of London’s Magic Circle, said to be the leading and oldest society of amateur and professional magicians in England, believed he had the answer to the mystery.

“When I went to Mr. Wilkinson’s dairy I had two things to settle in my mind. Was the rampaging, milking machine in a state of neglect and disrepair? And was there any loophole for trickery? The answer to the first question was patently ‘No’.

“Mr. Wilkinson himself is too stolid and hard-working a farmer to want to play tricks on himself. The continued disintegration of his milking machine has imposed a tremendous physical strain upon him and reduced his nervous system to a wreck.

“Then what of his son, Robin? Here is a strong, healthy boy of 15, obviously interested in machinery, always doing odd jobs in the dairy and – most suspicious circumstance of all – the indefatigable retriever of missing engine parts. But I am convinced Robin intentionally was not responsible for these strange goings-on.

“The evidence of eyewitnesses is that although he was present when some phenomena were happening, he was miles from the place when other things happened. Yet it was the boy Robin who gave me a clue. He said, in answer to my question: ‘Not much happens when I’m away’.

“That was it. The history of psychical research in other countries proves that nearly all poltergeist phenomena occur in the presence of a human agent, usually an adolescent boy or girl. In other words, I think it reasonable to suspect that the absurd happenings at Mr. Wilkinson’s farm are of poltergeist origin and that the human agent in the case is Mr. Wilkinson’s son.”

UFO Conferences: “They” Are Watching