The Legendary Lady of the Lake

It's strange how, sometimes, profound and intriguing mysteries of the supernatural variety can turn up pretty much on your very own doorstep. A perfect, paranormal case in point: the spectral young woman of White Rock Lake, Dallas, Texas, where I lived from January 2004 until the summer of  2008. Indeed, my apartment practically backed on to the very shores of the lake itself, which made the mystery even more inviting to me.

Built in 1911 as Dallas’s very first reservoir, White Rock Lake has nearly ten miles of shoreline, thick trees, a long and winding path for walkers and cyclists, and is home to more than thirty kinds of mammal, including possums, bobcats, and red foxes, more than fifty types of reptiles, and around two hundred kinds of bird. But, it's the supernatural, rather than the natural, which occupies our very own study of what may lurk deep within the dark waters and shadows of White Rock Lake.

As I got to know some of the elderly locals, a number of who had been living there for decades, I learned that the tale of the lady of the lake had been in circulation for a very long time. As the story went, a Dr. Eckersall, a Dallas physician, was driving home from a country-club dance late one Saturday night when he saw a young girl by the lake, who he suspected was in some sort of trouble. He quickly stopped his car, and motioned her to climb into the back seat of his vehicle. Clearly traumatized, she pleaded to be taken home, and the worried doctor was pleased to quickly oblige. He drove rapidly to the destination she provided.

As he pulled up before the house, the doctor turned around to look at her and... yep, you guessed it...the back seat was empty, except for a small puddle of water from the lake dripping down onto the floor of the vehicle. He thought for a moment then, having raced to the front-door, rang repeatedly on the bell. Finally the door was opened by an elderly, gray-haired man. It was then that the unsettling story came tumbling out in fine, spooky fashion: the girl was actually the man's daughter, but, she had lost her life in a boating accident on the lake some two years previously.

Of course, it scarcely needs saying that so-called "Phantom Hitch-Hiker" stories like this one absolutely abound all across the entire planet. But, despite the clear and undeniable folklore-driven aspects of the story, it was still certainly one that I was very pleased to get my teeth into. And just like a lot of such tales, there were many rumors to follow up on, but very few available hard facts.

The writer and researcher Ed Syers said: “In the 1920s, an excursion boat operated on the lake. One warm summer night, perfect for a moonlit ride, a young couple attended a formal party on the boat. An argument between the lovers ensued – possibly alcohol-induced – and the woman left the boat, jumped into her date’s car, and sped off into the dark night. The poorly maintained road around the lake twisted and turned, and the distraught woman lost control of the car where Lawther Road runs into Garland Road. The car careened into the lake and she drowned.” 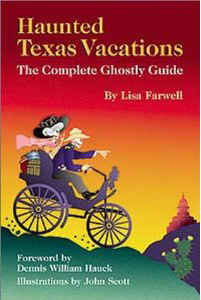 This was particularly interesting to me as my apartment complex was actually on Garland Road, and so I continued to dig carefully and deeply into the tales, of which there were many. According to acclaimed Austin, Texas-based ghost hunter Lisa Farwell, who described the story of a mother and daughter who encountered the ethereal woman on the lake: "The two were sitting on one of the boat docks at night when they spotted a white object floating in the lake. The women heard a blood-curdling scream and saw the white object roll over onto its back. The object turned out to be a body; it stared at the horror-stricken women through big, hollow sockets where the eyes should have been. Then, just as quickly, the terrifying sight disappeared.”

Interestingly, a perusal of old newspapers revealed to me that, in the late 1970s, the story of a woman who was claiming to be the “real” Lady of the Lake surfaced briefly in an article written by Dallas Morning News columnist John Anders. According to Anders, the woman in question had penned a letter to the newspaper explaining how, on one night, all those many years ago, she and her lover were parked up by the lake, under a full moon and inadvertently gave birth to the legend.

While they sat together, the man’s car suddenly rolled into the lake, its brake presumably having malfunctioned. Soaked to the skin, she managed to get a ride to the home of her parents on nearby Gaston Avenue. True or not, it is a fact that the saga of the ghostly, drowned woman of White Rock began to surface around that time. The letter-writer mysteriously signed her note to the newspaper with the words “Jam Net Jaid”, which, needless to say, only deepened the puzzle! She remained, inevitably, elusive.

Which means one thing and one thing only: the legend of the spectral girl of White Rock Lake lives on!