There are few periods in World History that become murkier than those during which conflict erupts. Within this already darkened jurisdiction of past studies, perhaps no era is quite so strange and troubling as those years during which the infamous Vietnam conflict had been waged.

Falling between the final years of the 1960s, the United States became embroiled in the conflict with the intention of aiding South Vietnam, and of course, to bolster the ongoing effort toward the spread of democracy in parts of the world still riddled by Communism. So far as historic periods of conflict are concerned, Vietnam is indeed remembered as one of the darker periods in history; and within its shadows of obscurity, there are nonetheless a number of curious accounts and seldom-spoken mysteries which have prevailed over the years, begging questions as to what kinds of odd operations might have been taking place "behind the scenes,"so to speak.

That is, of course, if such strange stories can be believed. Indeed, some of the more bizarre accounts from the Vietnam years are so strange, they might likely fall beyond the jurisdictions of what can even be considered "believable." And yet, the stories persist... which include accounts of friendly giants, glowing nonhumans, and winged wonder-women drifting about the deep jungles by cover of night.

The stories of strange humanoid beings appearing during the Vietnam conflict are many and varied, with one of the more memorable accounts stemming from the summer of 1969, near the Da Nang province, where Earl Morrison and his company witnessed something truly out of the ordinary. He and his two companions had been stationed during a watch above a bunker near the city of Da Nang, when they three of them began to notice a strange figure moving toward them from overhead in the distance:

“...It looked like a woman. A naked woman. She was black. Her skin was black, her body was black, the wings were black, everything was black. But it glowed. It glowed in the night—kind of a greenish cast to it.

There was a glow on her and around her. Everything glowed. Looked like she glowed and threw off a radiance. We saw her arms toward the wings and they looked like regular molded arms, each with a hand, and, fingers and everything, but they had skin from the wings going over them. And when she flapped her wings, there was no noise at first. It looked like her arms didn’t have any bones in them, because they were limber just like a bat.

She started going over us, and we still didn’t hear anything. She was right above us, and when she got over the top of our heads she was maybe six or seven feet up.

We couldn’t do anything. We didn’t know what to do. We just froze. We just watched what was going over because we couldn’t believe our eyes. … So we watched her go straight over the top of us, and still she didn’t make any noise flapping her wings. She blotted out the moon once—that’s how close she was to us … As we watched her—she got about ten feet or so away from us—we started hearing her wings flap. And it sounded, you know, like regular wings flapping. And she just started flying off and we watched her for quite a while. The total time when we first saw her and could almost define her until we lost sight of her and were unable to define her was between three or four minutes.” 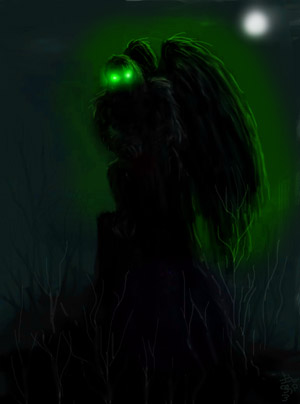 Fortean researcher John Keel featured this strange story in his book, The Mothman Prophecies, as it obviously appeared to detail the presence of a large, winged humanoid, similar to later reports of a creature allegedly seen around Point Pleasant, West Virginia, around the same time.

There were, however, other reports of so-called "mystery beings" seen during the Vietnam years. In his book UFOs in Wartime, author Mack Maloney recounts a curious story where one soldier claimed he was saved by a "giant" that appeared and attacked an approaching enemy. As this rather odd and whimsical story goes, the "witness" claimed to have been assisting a landed helicopter, which subsequently took off after being repaired, leaving the witness slightly disoriented and, eventually, lost in the jungle. Soon afterward, he would claim that he heard the voices of oncoming Vietnamese soldiers, and just as one had attempted to confront him, he heard a loud crack, followed by the appearance of the dead enemy soldier in front of him. There, behind the dead would-be-assasin, stood an eight-foot-tall giant, "dressed perfectly" and clad in an odd looking helmet, who told him to return to his helicopter.

Not all reports of encounters with beings during the Vietnam years were quite so benevolent, however. One story, shared in Martin S. Caidin's book Natural or Supernatural? detailed a peculiar story the author claimed to have collected from one GI, who along with his company, made the claim of having met a group of terrifying, glowing yellow humanoids that were impervious to gunfire.

The story had been related to Caidin by a U.S Marine calling himself "David E. Gower," having allegedly transpired on December 17, 1974 while serving the Fifth Special Forces Group, Marine Detachment. It had been an ambush, and Gower and his team had been carried upriver by boat, and deployed carrying Browning Automatic Rifles, a 45 caliber Thompson Subgun, four M16 rifles and an M-79 genade launcher. As Gower and his company traveled along, they reached a clearing where they found that none of the usual outdoor sounds--not even the familiar of sound of insects common to the humid jungle landscape--could be heard. 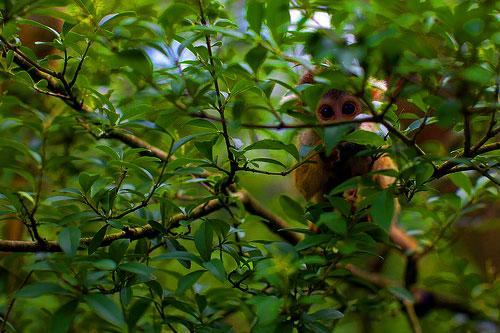 At this time, one of the soldiers became aware of a large deposit of strange-looking fecal matter; shortly thereafter, the soldiers claimed to see at least three large, yellow ape-like beings emerge from the nearby forest. These creatures were between seven and eight feet tall, yellow in color, and glowing. At first, Gower and his company remained concealed, but upon initiating a retreat, were then pursued by these beasts, which Gower claimed were essentially impervious to the heavy fire of their weaponry. Miraculously, Gower and his company said they made it back to their boats, and claimed that the entire way back down the river, they were able to see the bright glowing in the distance along the shoreline, presumably emanating off the bodies of these terrifying creatures.

Can such strange claims of encounters with mystery humanoids be taken as anything more than mere myth and fantasy? While the claims of soldiers during times of conflict may lend themselves to a bit less scrutiny than those of the average witness, many of these stories are simply so bizarre that to take them literally might force one to change his or her entire conception of what constitutes "reality." So what can be made of tales like these... are they perhaps the best evidence for mystery humanoids in our midst, by virtue of having been reported by various officers during the Vietnam conflict? Or are they simply proof that a teller of tall-tales will go to great lengths to fabricate a good story, and despite their professional disposition? Indeed, as we see here, it begins to become hard to tell at times...

Ghosts of the Belvoir Winery