Cats of the Magical and Mysterious Kind

Beyond any shadow of a doubt, one of the leading seekers of strange creatures in the world today is Dr. Karl Shuker, who hails only a couple of miles from where I grew up in central England. But, Karl is not only a fine cryptozoologist. He's an excellent author, too. And, right now, he has a new book out (yep, just in time for Christmas!) that should be of keen interest to anyone and everyone with an interest in strange creatures, folklore, magical tales, and Forteana. Its title: Cats of Magic, Mythology, and Mystery.

Gathered together for the very first time, and between the covers of one single volume, are countless stories that will astound and intrigue you. Indeed, be prepared to be thoroughly amazed, and totally captivated, by a spellbinding array of truly extraordinary, exceptional cats of every imaginable - and even unimaginable - variety. And it's Britain's CFZ Press - the publishing arm of Jonathan Downes' Center for Fortean Zoology - that we have to thank for publishing Karl's book.

Surveying an eclectic spectrum of feline anomalies existing both within and far beyond the perimeters of cryptozoology, here are homing cats and demon cats, king cheetahs and woolly cheetahs, ligers and leopons, winged cats and horned cats, belligerent nundas and evanescent marozis, the mythology of the tailless Manx cat, the origins of Lewis Carroll's Cheshire Cat, and latter-day sabre-tooths and feline deities from around the world. 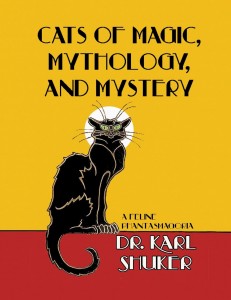 Moving on, stories abound in the pages of Cats of Magic, Mythology, and Mystery of dream cats, snow cats, psychic cats, displaced panthers and out-of-place pumas, Janus cats of the double visage and the lost constellation of Felis, marsupial lions and Queensland tigers, green kittens and Runcible Cats, albinistic leopards and melanistic tigers, servalines, cheetalines, aquatic yaquarus, and even a cat-headed serpent or two.

And to give you a further idea of the content of Karl's book, here are just a few of the chapter titles: ON THE TRACK OF AFRICAN MYSTERY CATS; BRITISH MYSTERY CATS - THE BODIES OF EVIDENCE; THE HORNED DEMON CAT OF WORLD WAR II – AND OTHER FELINE PHANTOMS; BLUE TIGERS, BLACK TIGERS, AND OTHER ASIAN MYSTERY CATS; and THE BLACK PUMA: CRYPTOZOOLOGY'S MOST CONTROVERSIAL CAT?

And, as an extra special treat, here, below, is an extract from the aforementioned chapter on the horned demon cat of the Second World War. Over to Karl...

"It could have been a scene enacted from Dante's 'Inferno' - even the clouds seemed to be wreathed in flames as torrent after torrent of plummeting German bombs screamed through the darkened skies over south London, and danced a fiery tarantella of death upon its shuddering streets, like a flurry of shrieking souls in everlasting torment.

"And in the midst of this panorama of pandemonium was Howard Leland - one of many volunteers with the ARP (Air Raid Precautions) who had been boldly defying the deadly rain of missiles throughout that fearful evening in October 1943 in a desperate bid to minimise its malevolent effects. Little did Leland realise, however, that he would soon encounter something infinitely more sinister, and malign, than anything conjured forth by the wartime enemy.

"As the ground reverberated from the intensity of yet another mighty explosion nearby, Leland ran into a deserted house to take shelter, until the immediate danger had passed. The building's interior was pitch-black, but with the aid of his torch he located a staircase, and rested on the bottom step for a while, waiting for this latest airborne assault to end.
Suddenly, a cold shadow of fear swept across him, for as he sat there he realised - indefinably but undeniably - that he was no longer alone in that house.

"Something - not someone - else was here too, close by, and watching him. Unbidden, his eyes gazed upwards, to the top of the stairs, and the feeling intensified. Surely there, concealed amid the stygian gloom, was the source of his fear - and now he would reveal its identity.

"Leland switched on his torch again, directing its penetrating beam onto the topmost stair - and beheld a hellish sight that transfixed him with fear, expelling from his mind all of that evening's previous horrors in an instant. Crouched upon the stair was a huge hairy beast with tabby-like stripes of black and brown, clawed paws, and blazing eyes like glowed like twin infernos, mesmerising Leland with their incandescent gaze. It would have resembled a monstrous cat - had it not been for the pair of sharp pointed horns that protruded from its skull!"

Now, if all that hasn't got your interest, well, I'm not sure what will! Cats of Magic, Mythology, and Mystery by Dr. Karl Shuker is a book that is rich in content, style, photos and data. Indeed, I have very little doubt, if any, that it will quickly become seen as the definitive study of the cat in all three of those realms described in its title. Buy, buy and buy!!