One of the strangest skills and talents allegedly possessed by humans is water-divining, or dowsing as it is more popularly known. Although the ability of the dowser to locate water by non-conventional means is looked on with suspicion and skepticism in some quarters, for many it is an age-old tradition that remains as absolutely relevant and vital today as it was centuries ago.

Not only that: the skill has attracted the secret attention of some quite unlikely parties, including the US Intelligence community, the government of the former Soviet Union, Adolf Hitler, the British Police Force, and a department of the British Government that played a key role in the battle against the Nazis during the Second World War.

The CIA, for example, has in its archives nothing less than a file on dowsing that is, quite literally, of biblical proportions. And it all revolves around a certain Mount Horeb where, according to the Book of Deuteronomy in the Hebrew Bible, Moses received the Ten Commandments from God. And although some biblical students perceive Mount Horeb and Mount Sinai to be one and the same, a significant number of scholars most certainly do not. Thus, we may never know for sure precisely where Moses allegedly received the legendary commandments.

One of the tales attached to the story of Mount Horeb is that when the Israelites were in the wilderness and perilously short of fresh drinking-water, Moses supposedly climbed the mountain and struck a particular piece of rock, which cracked open and – lo and behold – water came pouring out, thus saving the Israelites from otherwise certain death by dehydration. An early example of dowsing, perhaps?

Certainly, the CIA considered it to be just such a possibility. While it may sound strange to suggest the CIA has taken an interest in dowsing - and chiefly from the era of Moses, no less - this is, incredibly, most certainly the case. And the CIA is not the only official agency to have displayed such interest in matters relative to water-divining.

Moving on, in 1978, staff at the Foreign Technology Division (FTD) at Wright-Patterson Air Force Base, Dayton, Ohio prepared an extensive paper titled Paraphysics R&D – Warsaw Pact [R&D referring to Research and Development]. Page twenty-three of the document details positive results of both U.S. and Soviet research in the field of dowsing. Notably, a copy of the entire FTD document was sent to the CIA’s Office of Science and Technology (OSI) shortly after its publication. 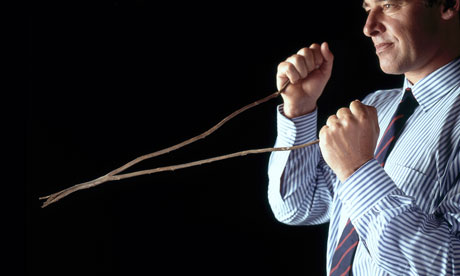 And, on more than several occasions, as additional Air Force's files reveal, Adolf Hitler consulted German dowsers as a means to try and determine the most profitable locales where he could get deep, restful sleep in between waging war on the Allies. And speaking of the Allies...

During the Second World War, England's Warwickshire Police Force secretly used one of its own officers skilled in the art of dowsing to try and locate the bodies of two local men – James Hiatt and Harry Marston - that had been buried under the rubble caused by the bombs of Nazi Germany. We assume that dowsing is something specifically employed to locate underground bodies of water, and certainly not secret searches for dead bodies. Our assumption is wrong. Very wrong, in fact.

A once-classified report of July 1941 that was prepared by a Sergeant J. Hall of Warwickshire Police states: "I was at the scene when I noticed P.C. 319 Terry coming from a nearby thicket fashioning a forked stick with a pen-knife. P.C. Terry commenced to walk over the bomb craters. About 30 seconds later he came to a standstill and I noticed that the forked stick which he was holding had commenced to wriggle very violently and he had great difficulty in holding it. He pointed to a particular portion of heaped soil near to one of the craters and said: 'They are under there.'"

Sergeant Hall added: "A quarter of an hour later the bodies of both men were recovered." As the files also reveal, Police Constable Terry had a solid - and growing - reputation in the field of dowsing, and his skills were used on several occasions in matters of a similar, secret nature. For a while, at least, they were. It wasn't long, however, before that situation changed drastically.

Notably, official files on this particular matter reveal that the British Government’s Ministry of Home Security expressed deep skepticism and concern over the whole affair, and concluded that the Warwickshire Police Force’s use of "spiritualism" and "the mysterious" in such a fashion during wartime was "particularly dangerous." Clearly, there were those at an official level in the UK that did not wish to see the world of the unknown playing a role in warfare.