In the Bavarian village of Konnersreuth in March of 1918, a 19-year-old peasant girl, Therese Neumann, fell from a stool while tending a fire in her uncle’s barn. Therese was left partially paralysed by the fall and over the coming months the poor, unfortunate Therese would suffer further falls. After one such fall in 1919, she was left completely blind. Now bedridden, Therese developed bed sores that so deeply ate into her flesh, at times, bone was exposed. Life was not looking good for the teenage girl who should have, at that age, been in her prime.

But on 29 April 1923, according to Therese herself, something miraculous happened to the devout Catholic peasant girl. After diligently praying for the impending beatification of Therese of Lisieux, Therese Neumann was cured of her blindness, on the very day her namesake was beatified in Rome.

Thus began an extraordinary life of miraculous cures, stigmata and religious visions spoken in ancient tongues for the poor peasant girl from Konnersreuth. 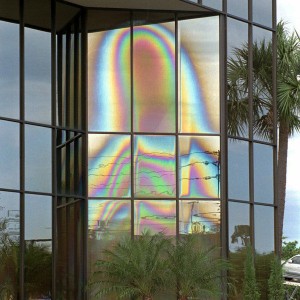 While her blindness had apparently been miraculously cured, Therese was still left bedridden through paralysis and still suffered agonising bed sores. She would suffer these debilitating afflictions for a further two years … until the day Therese of Lisieux was canonised as a saint. On that day, 17 May 1925, Therese claimed the newly canonised saint appeared to her and this time cured her of her paralysis and bed sores.

But just months later, the long-suffering young woman would again be confined to bed, this time with appendicitis. Then, just before she was to go in for surgery, Therese begged her family to take her immediately to the church to pray. Once inside, and after saying her prayers, she suddenly announced that she had been cured of this latest affliction also. 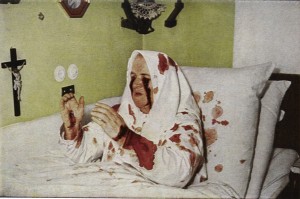 If Therese now thought her medical tribulations were finally over, she was unfortunately mistaken. In March 1926, the first day of Lent, a wound suddenly appeared just above Therese’s heart. This she initially kept secret. However, further wounds soon appeared on Therese’s body and she confided in her sister that along with the stigmata she had also begun having religious visions.

“Every Friday, according to her relatives, she has wept tears of blood, while red marks, like the Stigmata of St. Francis, appear on the palms of her hands, on her left side, and on her feet. When the marks appear her home is a place of pilgrimage for thousands from all over Germany and Czecho-Slovakia and other countries,” reported The Advertiser in November 1927.

“Eight months ago Fraulein Neumann was taken ill. Soon the stigmata or bleeding wounds on her hands, feet and at her side – Christ’s wounds – opened on her body. At times blood came from her mouth. For seven months the stigmata have bled and the girl has not taken food or water. According to the villagers she has not lost weight.”

“In July Fraulein Neumann began seeing visions and describing persons who participated in the tragedy of the Crucifixion, without knowing who they were. Her descriptions were recorded and Pontius Pilate, Caiphas, Judas and St. Peter were identified. In the last few days, moreover, the girl has been visited with the gift of tongues. When the local priest found her describing her visions in an unknown language he called in experts who recorded her words in Aramaic. Also, the different persons in her vision, it is asserted, speak with different dialects, St. Peter with the Galilean and Caiphas with a more Jewish intonation,” The Canberra Times reported.

“Therese speaks in her visions as a contemporary. She, therefore, quotes persons living in Jerusalem at the time of the Crucifixion who had a kind word for Judas because he kissed the Saviour, and who accuse Peter for first drawing the sword against Malchus, and shedding blood, which Theresa explains caused a bad impression in Jerusalem then.” 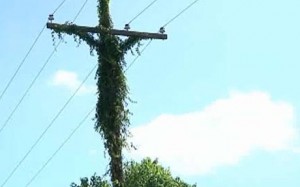 It was stressed that Therese’s visions included details that only the most scholarly students of Biblical history would be aware. “She described Christ carrying three pieces of wood for the cross and not the cross itself, and claims that the original cross was shaped like a Y.”

For the rest of her life, Therese remained an enigma, and somewhat of an international celebrity. It has been reported that more than 100,000 pilgrims from across the globe visited the Bavarian village to pay homage to the religious wonders that apparently manifested through the ever-suffering Therese. During Hitler’s reign of terror, she was an outspoken critic, but while the Gestapo kept a close watch on her, she was never directly targeted by the Nazi regime. After hostilities had ended, it is reputed that following a question from a US soldier on whether the United States would ever face war on its soil, she replied: “No, but at the end of this century America will be destroyed economically by a series of natural disasters."

On 18 September 1962, at the age of 64, Therese Neumann died of a heart attack. She had apparently lived on only the Eucharist for the past 40 years, and had not had any water for the past 36 years.

Archives of the Alien Variety?