When the US merchant ship, Mary Celeste, was found adrift in the Atlantic Ocean without a soul on board by the crew of British brig, Dei Gratia, on 5 December 1872, one of the most baffling maritime mysteries was born.

With the Mary Celeste in good seaworthy condition when boarded by the crew of the Dei Gratia, there appeared to be no plausible reason for the captain, crew and passengers to have abandoned the vessel, along with the six month’s provision of food and water still on board. For the crew of the Dei Gratia, however, one thing was clear – those on board had abandoned the vessel in a hurry. The question that for many still remains today is why?

The theories as to why the Mary Celeste was abandoned in such a hurry are many and varied. These range from attack by pirates or drunken, murderous sailors through to dubious claims of abduction by aliens or mysterious disappearances in the Bermuda Triangle (although the ship did not sail through the Triangle on that voyage). But perhaps the most plausible of all theories is that an explosion in the hold of the vessel, caused by leaking alcohol fumes from a white oak wine barrel, led the captain to order, “Abandon ship!” 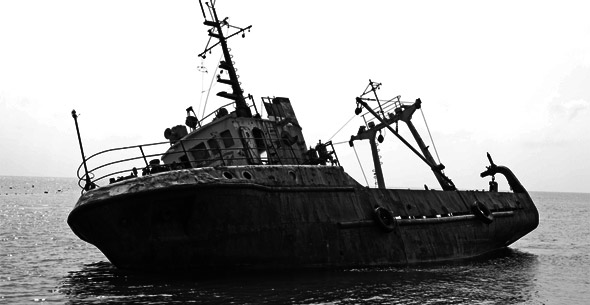 But could there be another, somewhat more mysterious, possibility?

Sailors’ Tales of the Supernatural

Adelaide’s The Register, on 2 February 1920, published Sailors’ Tales of the Supernatural. In this article, Clive Holland, described as a much-traveled author, recounted a story he had been told years earlier by an “old God-fearing Scottish sea captain” on a possible encounter with St Elmo’s fire while sailing the Atlantic.

One day the first mate came to him and said that on the previous night, during his watch, he had seen a fearsome shape climbing down the rigging. It had emitted a phosphorescent glow, and was part man, part beast. The captain said, 'I simply laughed at Jackson, and told him he had taken too much to drink. But the man was very serious, and told me that the helmsman, and one of the watch, had also seen the 'shape’.

Was this phosphorescent glowing “shape” witnessed by the first mate and helmsman the phenomenon known as St Elmo’s fire? Whatever it was, the superstitious seafarers aboard the ship, including the captain, were left terror-stricken by its appearance.

“Next night the captain was aroused about 1.30 a.m. by hurried footsteps on deck. The mate, his face distorted with fear, appeared in the doorway of the captain’s cabin, and entreated the latter to come on deck.”

The captain raced to the deck, where he saw for himself the glowing “shape” its phosphorescent rays lighting amidships.

“It was impossible to deny the presence of this terrific and terrifying shape,” the captain told Holland. Feeling his hair rising on his head, and “summoning all my courage,” the captain advanced to meet the “thing”.

“I walked straight through it, feeling at the same instant a chill such as I have never felt either before or since,” the captain recounted.

The next morning, the superstitious crew, headed by the first mate, confronted the captain and vowed that if the glowing “shape” appeared again that night, they would immediately abandon ship.

An Omen of Death?

Another intriguing, yet tragic, incident reinforcing the superstitious fears of seafarers experiencing St Elmo’s fire was recounted in The Capricornian in February 1909.

A curious incident occurred on the Maria before she was wrecked which may be referred to, though it savours of superstition. During the time the Maria was being driven south by the monsoon, a dancing light was seen on the mast of the vessel, a sort of will-o'-the-wisp. This light the sailors called a 'ghost-light,' and stated that it portended some disaster. The light was seen for several nights, and the curious thing about it was that every person could not see it. Mr. Ingham, for instance, failed to see it, though his three mates pointed it out to him again and again. At length one of them said: 'If you cannot see that light you must be blind.'

Following the appearance of this “ghost light” dancing about her mast, the Maria was soon lost … and the mystery deepened.

“However, Mr. Ingham was by no means the only one who could not see the light, and those who failed to do so could not make the affair out, as the others were so earnest about it. When the eight saved on the raft were on shore, the matter was brought up by Forster, and it was found that all those who had seen the mysterious light, including Ingham's three mates, were drowned, while none of those saved saw the mysterious light. Mr. Ingham can give no solution of the extraordinary occurrence, but merely tells exactly what occurred.”

Could those on board the Mary Celeste have also witnessed St Elmo’s fire dancing about her mast, and believing this “ghost light” to be an omen of impending death, hastily rushed to the lifeboat and abandoned a seaworthy and well-provisioned ship?