According to a poll conducted by the British Medical Journal in 2007, sanitation is the greatest medical milestone of the past 150 years. Readers of the respected journal chose sanitation over 14 other short-listed medical milestones such as the development of vaccines, the contraceptive pill, antibiotics and anaesthesia.

In Sanitation rated the greatest medical advance in 150 years, published in The Guardian on 19 January 2007, Johan Mackenbach of Erasmus University Medical Centre in Rotterdam, responded to the poll saying: "I'm delighted that sanitation is recognised by so many people as such an important milestone. The general lesson, which still holds, is that passive protection against health hazards is often the best way to improve population health."

Try telling that to the hundreds of thousands of Brazilians who claim to have been cured by Zé Arigó – the psychic surgeon of the rusty knife whose sanitation procedures where limited to a quick wipe of his rusty knife on his shirt before hastily proceeding to his next patient. 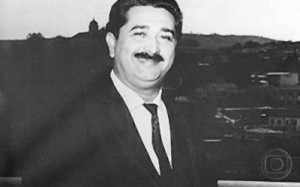 José Pedro de Freitas, who would later become famous as Zé Arigó, was born to a poor farming family in the state of Minas Gerais in Brazil in October 1921. Leaving school after just the third grade, by age 14 he was working in a local mine – a vocation that the young de Freitas would likely be trapped in for the rest of his working life.

That was, until everything suddenly changed for de Freitas at the age of 30.

In 1950, de Freitas began suffering painful headaches and insomnia and would often fall into trance-like states and experience hallucinations. During one such hallucination, de Freitas saw the vision of a “bald man, dressed in a white apron and supervising a team of doctors and nurses in an enormous operating room”. This bald man would soon become known to de Freitas as Dr Adolphus Fritz.

According to de Freitas, the spirit of Dr Fritz had possessed him, revealing that he had been a German doctor who had died in 1918 during the Great War. It was at this time also that the poorly educated de Freitas began to demonstrate amazing medical feats – and would become famous as Zé Arigó.

It appeared the spirit of Dr Fritz wished to continue on in his medical career.

Zé Arigó’s first patient would be the unsuspecting state senator Bittencourt who was staying at the same hotel as Arigó and who had recently been diagnosed with a cancerous tumour requiring immediate treatment. According to the story, while in a trance-like state, Arigó suddenly entered the senator’s room. He was carrying a razor.

Neither the senator nor Arigó remembered what happened next, however. Arigó was in a trance at the time and the senator soon passed out. The senator awoke the next morning to find his shirt slashed and bloodied and a neat incision between his ribs. Dazed and confused, the senator went out into the street, hopped into a taxi and headed straight to his physician. After taking several x-rays, the stunned doctor informed the senator that not only had his tumour miraculously disappeared, but that the surgery to remove it could only have been carried out using the latest medical equipment and procedures that, at that time, were only available in the United States.

After curing such a high profile patient as the senator, word of Arigó’s miraculous, yet unsanitary and unorthodox surgical skills soon spread.

Despite having little formal education, and no medical training whatsoever, Arigó opened a small clinic and began carrying out medical procedures on locals free of charge using little more than his bare hands, a rusty knife or pair of scissors … and the expert guidance of Dr Fritz from the spirit world.

On one occasion, dentist Carlos Cruz from the state capital of Belo Horizonte, along with his sister-in-law, Sonja, and her physician father lined up outside Arigó’s clinic, patiently waiting their turn to see the so-called psychic surgeon of the rusty knife. Upon the trio entering the small clinic, and before uttering a word, Arigó immediately turned to Sonja and informed her that she had cancer of the liver. This, she already knew, having been recently diagnosed and given the grim news that the cancer was inoperable. After laying Sonja on the clinic floor, which was covered in newspapers, Arigó took out his penknife and made an incision. The dentist and physician watching on where shocked and expected to see a lot of blood, but instead there was merely a trickle.

Then, according to Cruz, things got really weird. 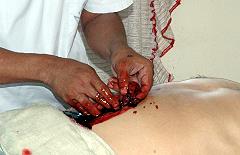 Arigó inserted a pair of scissors into the incision and immediately took away his hand. According to the witnesses, the scissors began moving of their own accord and after a few seconds Arigó pulled them out, reached into the wound and extracted the tumour. After wiping the wound with a piece of cloth, he placed a crucifix on the incision and it closed up. Sonja felt no pain and was able to get up and walk around, although in a somewhat dazed state. A later biopsy confirmed that the tumour was indeed cancerous.

Arigó would go on to perform thousands of similar unsanitary surgeries in his small clinic while in a trance-like state and supposedly possessed by the spirit of Dr Fritz. Often, he would operate on hundreds of people a day. Welcoming anyone to observe his unorthodox medical procedures, he would often perform in front of bewildered doctors … and the cameras.

Sadly, however, on 1 November 1971, Arigó was killed in a car crash, and for a time at least, the medical career of the spirit of Dr Fritz was put on hold. But before long, others would apparently take up the mantle, claiming that, like Arigó, the surgeon of the rusty knife, they too received the gift of otherworldly medical guidance from the good German doctor.

According to Arigó himself, Dr Fritz once told him through a channelling session that he had been born in Munich but moved to Poland at the age of four. After his parents both died prematurely, Fritz was forced to work from an early age and studied medicine on his own. He was sent to prison one month prior to graduating after a General brought in his sick daughter who later died while in his care. He later escaped prison and fled to Estonia and died towards the end of the First World War.

But sadly, despite “exhaustive research” it seems no record can be found that a Dr Adolphus Fritz ever existed. So, if Dr Fritz never really existed, who was it guiding the hand of the surgeon of the rusty knife?