On July 28, 1995, the US Government's General Accounting Office's report on the Roswell affair  surfaced from its National Security and International Affairs Division. And although the GAO's report did not provide any smoking-guns - or, rather, any old B&W photos of dead bodies and wreckage at the crash-site on the Foster Ranch, New Mexico - it did provide something interesting and controversial. But,  it is something that has been misinterpreted for years.

During the course of their search for records to try and better understand what had taken place at Roswell in early July 1947, the GAO learned that the entire outgoing messages from Roswell Army Air Field generated during the period that the event occurred were missing, and under circumstances that could not be fully determined and proved.

This, inevitably and very understandably, led certain Roswell researchers to proclaim that this was evidence of a significant event of UFO proportions having occurred, and which certain elements of officialdom were determined to keep forever hidden from the populace, the media, and the UFO research community - and possibly, even, from anyone else in government who might dare to come looking, such as investigators of the GAO.

And, maybe, that's precisely what happened. But...the story is not quite as straightforward as that.

Time and again, I have heard UFO researchers say, words to the effect of: "Because the 1947 files are missing, this means the government or the Air Force pulled them years ago, so no one could get to them." That's not impossible. But, there's another issue. The files in question that are unavailable to us do not cover just the key period of the Roswell affair. Rather, they extend back as far as March 1945 and as late as 1949.

We are led to believe that if aliens crashed at Roswell, then it was an event out of the blue, with little or no advance notice, and certainly not something that had been anticipated for a significant period of time. So, that being the case, why the need to pull files from as early as March 1945 to hide something that is said to have occurred, without much warning (if any at all), in the summer of 1947?

Proponents of the notion that aliens crashed at Roswell might say that the government was just being overly careful, and wanted to make sure that (a) nothing was left behind, and (b) nothing had been misplaced in an earlier collection of material, or indeed, within a later collection of material, possibly held in secure safes at the base. So, they chose the best and quickest option available to them and scooped up pretty much everything that covered approximately two years or so before, and up to two-and-a-half years after the crash.

Maybe, that is exactly what happened. On the other hand, one can make a valid argument that the vanished files issue has no bearing on Roswell, because the documents that are missing incude papers dating from two years before the event even took place. This also offers a theory (and, granted, that's all it is) that there was another reason for the large-scale loss of material that the GAO sought to uncover.

Let's see what the GAO had to say about this matter of missing messages in its 1995 report: "In addition to unit history reports, we also searched for other government records on the Roswell crash. In this regard, the Chief Archivist for the National Personnel Records Center provided us with documentation indicating that (1) RAAF records such as finance and accounting, supplies, buildings and grounds, and other general administrative matters from March 1945 through December 1949 and (2) RAAF outgoing messages from October 1946 through December 1949 were destroyed."

When the GAO demanded to know the reasons behind this development, they got an answer, as GAO files note: "According to this official [the Chief Archivist for the National Personnel Records Center], the document disposition form did not properly indicate the authority under which the disposal action was taken. The Center’s Chief Archivist stated that from his personal experience, many of the Air Force organizational records covering this time period were destroyed without entering a citation for the governing disposition authority. Our review of records control forms showing the destruction of other records--including outgoing RAAF messages for 1950--supports the Chief Archivist’s viewpoint."

So, in other words, we have yet another explanation that does not include high-level conspiracy to explain the loss and destruction of files, but which says far more about bureaucracy. Note too that, on digging further, the GAO learned that 1950-era Roswell files had been destroyed as well, not just records up until 1949 (which is something else that fails to get mentioned to any great degree by ET proponents of Roswell). 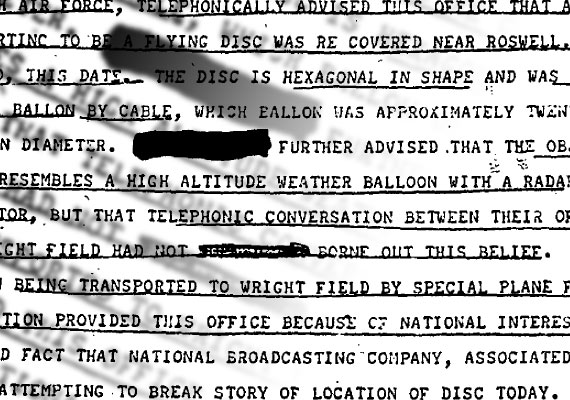 So, what's my point in all this? Well, this is my point: Yes, it certainly is intriguing that half-a-decade of certain files are missing from the old Roswell Army Air Field, and it may even be an issue of deep conspiracy. Or, it may not be.

But, if UFO/Roswell researchers wish to maintain that the missing files from 1947 point to a specific cover-up of the Roswell event - and Roswell occurred out of the blue in July of that year - then they have to provide a viable reason as to why documentation dating back as far as March 1945 was pulled too, and why additional documentation remains missing from as late as 1950.

Saying something along the lines of "the outgoing Roswell messages from July 1947 are missing" is absolutely true, and it opens eyes and it catches the attention of people. Noting that, in
reality, the files actually cover 1945 to 1950, and also cover general administrative issues at the base, is far less attention-grabbing.

The issue of the missing files is undeniably interesting and deeply worthy of further study, scrutiny, and investigation. But, if we are to remain fair and balanced in our approach to addressing this aspect of the affair, we need to recognize that the "vanished documents" saga is not as clear-cut as it might seem, or as many might prefer it to be.