Myths in the Sky: The Mysterious Mythos of our Moon

By the light of a full moon, it seems that virtually anything could happen, if the folklore we've associated with Earth's lonely natural satellite were to be believed. From transforming a man into a bizarre were-beast, to the literal changing of the Earth's tides, the moon has been attributed to a plethora of strange phenomena, ranging from the mythic and supernatural, to the realms of pure science.

Indeed, the moon has, over time, come to represent a cultural phenomenon within itself; the goings on of late-night happenings, secretive rendezvous, and quite encounters kept away from the waking world have come to be represented by the full moon. It is a beacon not only for strange night-owls and insomniacs, but also for those seeking to rid themselves of the pressures and standards of the daylight world. 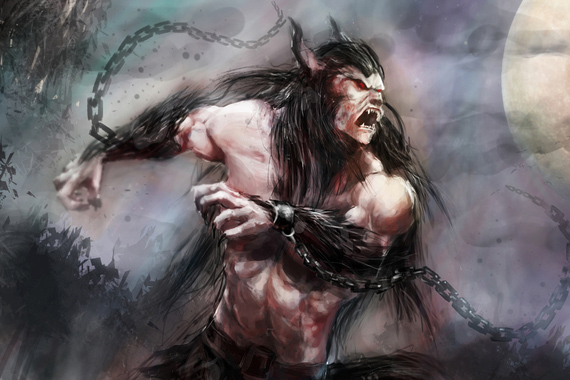 While themes that involve supernatural beasts like the werewolf are already very familiar to our modern society, in recent years there have been a plethora of other strange conspiracy theories that have come into existence regarding the lunar satellite, ranging from theories of a hollow moon and a "second moon" existing in Earth orbit, to the supposed colonization by secretive earthbound organizations and even extraterrestrials using it as an outpost for their earth-related activities. But whether it be superstitions, or conspiracies, how much truth is there to the mystique the moon has managed to possess over time?

The notion that the moon possesses strange powers over humanity is an age old concept, and looking back to the earliest modern philosophers the likes of Pliny the Elder, Aristotle, and others, it has been a common belief that the moon--especially a full moon--could cause panic, madness, or other forms of hysteria to erupt. A general approach to explaining this once traditionally involved the notion that the human brain, with its partial liquid composition, might have been subject to the same effects that the moon appeared to display on Earth's tides. While science has proven this to be impossible, the notion that a full moon can cause varieties of madness has no doubt remained consistent with legends of lycanthropy and were-beasts. Even today, some statistics maintain that violent crimes and other social unrest tend to spike alongside the full moon appearing in the sky.

Science does not support such ideas, however, suggesting instead that there are prosaic explanations for any apparent "moon madness" that may be believed to exist. Writing for Scientific American in 2009, researchersScott O. Lilienfeld Hal Arkowitz discussed that what is known as an "illusory correlation" might underly people's perception of a correlation between strange phenomenon and a full moon:

Illusory correlations result in part from our mind’s propensity to attend to—and recall—most events better than nonevents. When there is a full moon and something decidedly odd happens, we usually notice it, tell others about it and remember it. We do so because such co-occurrences fit with our preconceptions. Indeed, one study showed that psychiatric nurses who believed in the lunar effect wrote more notes about patients’ peculiar behavior than did nurses who did not believe in this effect. In contrast, when there is a full moon and nothing odd happens, this nonevent quickly fades from our memory. As a result of our selective recall, we erroneously perceive an association between full moons and myriad bizarre events.

While there may be no scientific basis for "full moon madness", this hasn't removed the possibility that the moon might have been used for purposes of creating an extra-planetary outpost for off-earth affairs... at least in the minds of a few researchers. For instance, the highly-decorated former pilot John Lear has made frequent use of NASA photos for making a case that there are literally such things as buildings, mining operations, and perhaps even trees that are visible on the lunar surface (for more on Lear's claims about objects visible in official NASA photography of the moon, take a look at this website). It has been asserted regarding Lear's claims that there could be existent operations being carried out by Earth agencies that could account for such "Lunar Anomalies," although the claim that alien bases might exist there also reamin popular by many fringe thinkers today.

While less intriguing than the sensational claim that "alien outposts" may exist on the far side of the moon, what is interesting nonetheless (and remains a verified fact) is that, from time to time, Earth may be capable of acquiring a second moon. Indeed, a number of years ago it was reported that a tiny asteroid had managed to drift into Earth’s gravitation field, where it remained captured for a short time. Given the name 6R10DB9, this small asteroid nonetheless was large enough to be considered by some to be a "second moon," of sorts, and of course, the possibility remains today that at some point another (perhaps larger) asteroid could enter Earth's gravitational field and reside there, forming a second natural satellite hovering around the Earth.

A distinct separation exists between those things that are believed to occur at the time of a full moon, etc, compared with the multitude of strange, yet verifiable natural lunar phenomena that are scientifically accepted. While the latter are certainly less sensational than the notion of "alien moon bases", it cannot be denied that there are indeed a number of fascinating potentials that seem to exist within, around, or in conjunction with a full moon's appearance. Despite what we already know about our moon's influence on life here on Earth, over time we will no doubt manage to uncover even greater mysteries, as we grow to know our lonely natural satellite a bit better... and armed with new technologies suited for probing its deeper mysteries.

Gods of the Hunt: Legends of Mysterious Slant-Eyed Giants