Greetings, fellow Coppertops! This week the Fortean Matrix has in store for us a veritable cornucopia of news almost too fantastic to believe. We'll find cybernetic limbs & augmented reality gadgets, UFOs over volcanoes & ape-men on ice. And as we learn of Obama's plan to unravel the secrets of the human brain, we'll find another project intended to confirm the reality of one of our favorite mysteries, using the allure of a big price in cash. I don't know about you, but I could certainly use all that dough;  the Nebuchadnezzar would look nicer with a new coat of paint --and a jacuzzi, definitely a jacuzzi.

10 Our first Pill takes us to Oklahoma, where the Sheriff of Sequoyah county James Lockhart is finding no conventional explanation for the death of Danny Vanzandt, a 66-year-old who died in a fire at his residence last Monday. 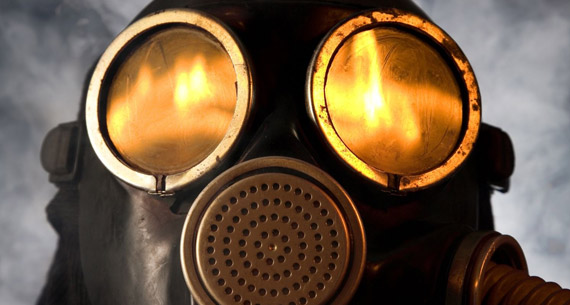 Lockhart said the remains were in the kitchen and there was no other damage in the home. The sheriff says there was no apparent source of the fire.
“This is a case that I’ve never seen before,” Lockhart told KFSM-TV.

A possible theory the local authorities are considering: that Mr. Vanzandt spontaneously combusted.

“I think there’s only about 200 cases worldwide, and I’m not saying this happened. I’m just saying that we haven’t ruled it out,” Lockhart told KFSM.

We've previously covered another case of SHC here at the Pills, and I'm still undecided on which form of death is more terrible: spontaneously combusting with no prior warning or being mauled by a hungry tiger. When it comes to leaving this mortal coil, Mother Nature *loves* variety, doesn't she? Sadistic bitch...

9 Come to think of it, there's a form of death which IMO is far more terrible than being mauled by a tiger or being crushed by a snow avalanche, and that is Alzheimer's. I have personally witnessed the mental deterioration caused by this illness on a family member, and seeing how the person you used to love & know is  slowly fading away right in front of you is an agony in itself, especially because you know there's nothing you can do about it. 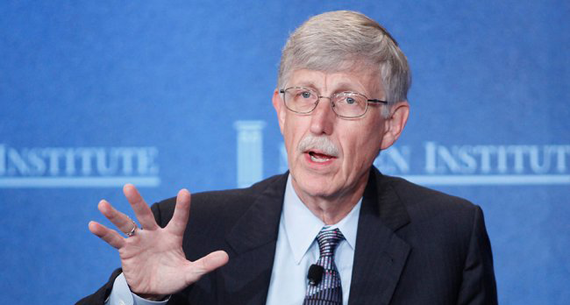 That might someday come to change though, thanks to a decade-long scientific project planned by the Obama administration, seeking to follow on the footsteps of the historic Human Genome Project of the 90s. But instead of decoding our DNA, the Brain Activity Map project will seek to unravel the mystery & complexity of the human brain.

The project, which the administration has been looking to unveil as early as March, will include federal agencies, private foundations and teams of neuroscientists and nanoscientists in a concerted effort to advance the knowledge of the brain’s billions of neurons and gain greater insights into perception, actions and, ultimately, consciousness.

The thing that makes this project so important, is because it has the incredible potential of becoming a watershed moment not just for Science, but for the entire Human civilization. Like many of you reading these lines, I disagree with the current materialistic paradigm which posits that the brain is the sole generator of consciousness, and just like the Human Genome Project's gave way to more questions than answers, I think it's very likely that the Brain Activity Map project will find there's much more to consciousness than the firing of electrochemical signals between neurons.
Then again, I could be wrong. And that too could result in a ground-breaking moment in our modern culture, as religions across the world would have to face the results of this bold study.

8 Obama's project could also pave way to unforeseen advances in the field of A.I. While we wait for the arrival of our cybernetic overlords, we might as well upgrade ourselves in preparation for the big battle. One possibility to cyborg-pimp yourself is with this new bionic hand that lets the wearer 'feel' whatever it is the hand is touching --car keys, bosoms, lightsabers, you name it. 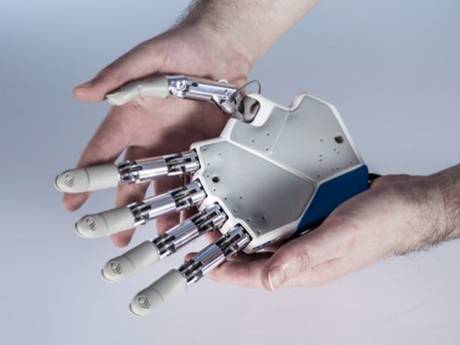 The wiring of his new bionic hand will be connected to the patient’s nervous system with the hope that the man will be able to control the movements of the hand as well as receiving touch signals from the hand’s skin sensors.

But if you don't like the idea of intrusive wiring into your skull in order to control your mechanical hand, fret not: Temporary tattoos will soon let you not only control the new artificial limbs in your body, but it might also allow you to control drones, move things around your house just with your thoughts, and even communicate with your friends without any kind of smartphone or gadget. Just so you know Apple, I already copyrighted the term iPatch, k?

7 A Brave New World is on the horizon. How will it look like? The folks of Google wanted to answer that question, and gave us a glimpse of their newest project: Google Glass.
[youtube]http://youtu.be/v1uyQZNg2vE[/youtube]
American blogger Jason Kottke had this to say about Google's vision of the future:

6 Imagine just how many more videos of the Russian meteor we would have by now, if the Google Glass was already on the market. Still, it probably wouldn't help dissipate the mistrust about a considerable portion of the Russian population, who don't believe the 'official' explanation given to the fiery bolid that exploded over the city of Chelyabinsk with the energy of 30 Hiroshima bombs. Ultra-nationalist politician Vladimir Zhirinovsky has exploited the event by claiming it was a weapon test by the Amerikinsky, and the daily Noviye Izvestia conducted a survey showing that barely half its readers believe the meteor explanation.

Some commentators at io9 alluded this culture of mistrust to the fact that the Age of the Enlightenment had skipped Russia. I, along with some others, think this is the result of the way Soviet regimes manipulated the news with propaganda. Let's just remember the way the Kremlin behaved during the first weeks of the Chernobyl incident in the 80s.

And while we're at it, let's also think of the current state of events on the other side of the pond, with an increasing number of American citizens who don't believe in the explanations given by their own government. IMO Washington is also to blame for hazardous state of mistrust infecting our culture in the XXIst century --magic bullet anyone? 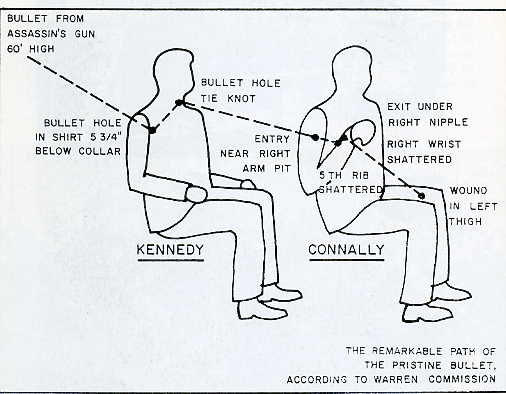 5 Speaking of conspiracy theories, remember those guys who wanted to sue CERN because they feared the Large Hadron Collider would create a black hole that  would then swallow the Earth? Well, maybe they were into something after all! Turns out that now that particle physicists have (most likely) discovered the Higgs boson, its calculated mass has just the right value to permit the creation of a giant fast-spreading bubble --another universe, actually-- that will end up obliterating our old one. So money well spent, CERN! 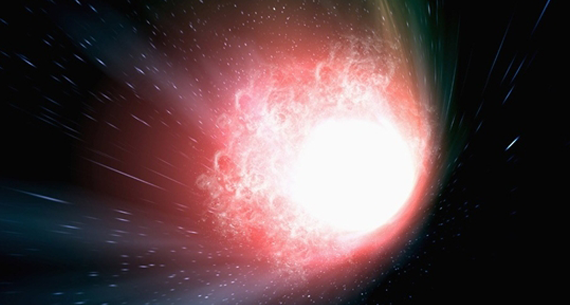 Then again, the folks in India have been telling us pretty much the same thing with their concept of Brahma's dream. So I guess we should have gotten over it by now.

4 But Because the CERN dudes shouldn't hog all the limelight, the American Association for the Advancement of Science is teasing with some soon-to-be-released groundbreaking news concerning one of the biggest mysteries in modern physics: the enigmatic dark matter.

"We are so excited because we believe we are on the threshold of a major discovery," said Michael Turner, director of the Kavli Institute for Cosmological Physics at the University of Chicago, at an annual conference.
"On the cosmology side we now understand that this mysterious dark matter holds together our galaxy and the rest of the universe," said Turner. 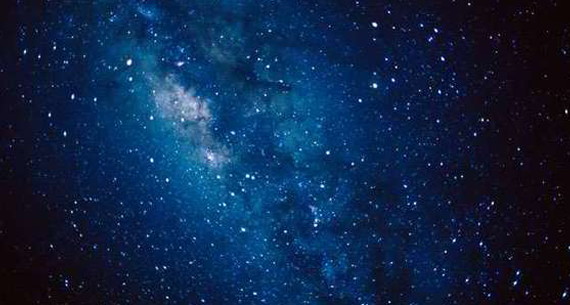 While I'm pretty sure the answer is not gonna be dust or the meatballs of the giant spaghetti monster, the news nonetheless has the potential to revolutionize the world of Science. Stay tuned!

3 The field of cryptozoology has mysteries of its own. One of them deals with the famous Minnesota ice man, a carnival attraction that managed to stir a great deal of controversy when it received the endorsement of 2 of the most respected researchers in the field --Ivan T. Sanderson & Bernard Heuvelmans-- only to disappear amid allegations of forgeries & secret acquisitions. A true detective story worthy of Sherlock Holmes, or at least Fox Mulder.
This week the Charles Fort Institute reported that the (alleged) original Minnesota ice man was being offered for sale on eBay.Alas, the latest updates indicate that the big-ass rubber doll has already been sold by an anonymous buyer, so it looks like we're no closer to solving this case than we were 40 years ago. Bummer...

2 Cryptozoology has always fascinated me, but my greatest love has always been UFOlogy. Months ago we commented on a videoclip taken near mount Popocatépetl (Mexico) which seemed to show a cylindrical object plummeting into the mouth of the crater.

Well, guess what? Another video has appeared showing yet another long luminous object flying over the famous volcano.

Sure, the grainy b/w video isn't too compelling in itself. But, as I've already stated, it's the cumulative aspect of all these weird anomalies near mount Popo the thing I find incredibly interesting. Do you agree?

1 Then again, even people I respect in this field (like Jason McClelland & Maureen Elsberry) showed a lot of skepticism with the first mount Popo video, and I can understand that; one person's incontrovertible evidence is another one's phony hoax.

Solid evidence to the reality of the UFO phenomenon has always been hard to come by. Is there a way to change that? James Fox seems to think so. Over at the Huffington Post Alejandro Rojas reported that the famous filmmaker will organize a reward of $100,000 to anyone who can provide "the best proof that some UFOs are alien spacecraft." The announcement will be officially made during the International UFO Congress in Arizona next week, as part of Fox's promotion for his next documentary project The 701, a reference to the cases project Blue Book wasn't able solve with conventional explanations.

"701 is the number the government doesn't want you to know about. The U.S. Air Force had a serious problem, starting in the late 1940s. Technological devices were invading our airspace with total impunity. Glinting, metallic discs, which could accelerate and maneuver in ways hard to imagine, were being seen in incredible numbers by reliable witnesses. Many of them were pilots."

The problem I have with this idea is that, in the few blogs where this has been discussed, there seems to be the notion that 'evidence' & 'proof' are interchangeable terms, and IMHO they are not. Evidence --from the Latin Evidentia, which implies for anyone to see-- doesn't necessarily mean you have found what you're looking for, but it may mean you're on the right track. Proof on the other hand means you can stop looking, for you have found the answer to your query --even though it may not be the answer you were waiting for.
Evidence is compelling. Proof is conclusive.

That's why I still think that even though we don't yet have conclusive proof of the unconventional nature of the UFO phenomenon, the cumulative effect of the available evidence hints to a non-human intelligence behind some of the sightings. But I would be the first to admit we don't still have conclusive proof --and this may have something to do with the self-denying nature of the phenomenon itself.
So even though I wish the best for James Fox & his documentary project, I don't have much hope for it becoming the thing that will turn the tide in the UFO discussion.

Until next time, this is RPJ jacking out, hoping you yourselves have found compelling evidence that you're on the right path --I sure have :)

Maybes in Black: The Influence of “MIB Culture”