One of the persistent problems with the study of UFOs over the last several decades involves how easily misidentification of known (or at least manmade) aerial objects can occur. In addition to misidentification of "knowns," there are also the "unknown" aircraft that are occasionally seen taking to the skies, which no doubt constitute a great number of UFO reports--if not the majority of unexplained aerial phenomenon, in truth. But someplace between the known and unknown quantities here are the ever-popular drones.

The explosion of aerial drone technologies into our culture has led to quipping of a wide variety of new catch-phrases and cultural memes, such as "Attack of the Drones," and "Drone Wars" that incorporate a touch of Star Wars "fandemonium." The widespread use of unmanned aerial vehicles is not relegated only to covert stealth craft used by government agencies, however; a number of civilian drone models that are beginning to see popular use are beginning to reshape the way people will see the skies in the coming decades.

In terms of the technologies being employed, there are definite reasons why drone technologies are on the rise today (thus my reason for ongoing discussion about them on this website). And hence, the pertinent question here is, how will this also shape the future of ufology?

Our world is becoming more and more influenced by the use of synthetic technologies, a number of which have proven a bit vexing in terms of their influence on the study of unidentified flying objects. Take, for instance, this video which has made quite a stir recently, showing a pair of saucers that are all-too-obviously CGI... and yet what's not so obvious is the fact that virtually everything else in video is also a computer-aided rendering. Such use of computer technologies that employ realistic-looking animation like this have already made the serious study of UFO film or footage to be nearly obsolete, in a sense, as it is virtually impossible to distinguish between the potential "real" craft appearing on film, and the CGI renderings that sometimes occur. And yet, as more drone technologies continue to be deployed on both a military and civilian level, even real-time observation of strange objects in the skies (particularly at night) is becoming more difficult.

So why are we seeing what many would liken to being a "drone explosion?" Quite simply, the technology being implemented in newer drone models didn't exist until the last few years. "Five years ago the Parrot (drone) couldn't have existed," a recent Time article wrote of the advent of newer drone technologies. "Five years ago there weren't cameras as tiny and sharp or chips as tiny and fast. Batteries weren't as light and didn't last as long. Smart phones and tablets still had a long way to go, as did the hyperminiaturized sensors with which (drones like the Parrot are) studded: an accelerometer, a gyroscope, a magnetometer and a pair of ultrasound altimeters."

With all these new gadgets that drone technologies are able to implement, they not only are becoming more popular for use in areas outside military and surveillance; they are also becoming more affordable for recreational purposes (yes, there are such things as recreational drones, the likes of the French made AR. Drone 2.0, fitted with cameras that can be controlled with so little as a smartphone). And each of these UAV craft has its own distinctive shape, size, and range of capabilities just as well. 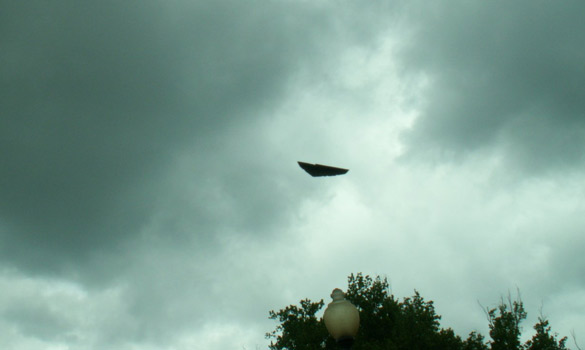 At present, while most drone craft bear obvious similarity to small planes or helicopters, within the next few years this may not remain the case. One of the key problems associated with the study of UFOs over the last several decades involves how such craft might be capable of moving at such an incredible rate of speed, and yet without harming anyone piloting the craft from within. In the case of unmanned aircraft like the popular military drones in use today, these objects may eventually be capable of maneuvers that any piloted craft simply could never undertake under conventional circumstances.

Once we have small, unmanned aircraft that literally behave like the craft in classic UFO reports, there will be obvious advantages to any individual or organization putting such craft to use; although there will also be inherent problems for tomorrow's serious ufologist, in terms of trying to distinguish the "unknowns" in a field that very well could continue to mimic an elusive technology that has evaded us for decades... or possibly more. Thus, could the implementation of advanced UAV technology in the coming years effectively render the study of UFOs obsolete, in at least some regard?