What is the connection between David Icke and former Page Three girl Leilani Dowding? It turns out the two see eye-to-eye when it comes to conspiratorial matters, the 33-year-old English glamor model and television celebrity expressing a strong admiration for Icke’s theories.

In an article that appeared in The Sun on March 13, 2013, it was revealed that Dowding, during a recent private dinner party with a group of friends and acquaintances, stunned her companions by stating, among other things, that she shares Icke’s belief in shape-shifting reptilian aliens.

The function, held during Los Angeles Fashion Week, was presumably restricted to the classy and glamorous. One unnamed attendee confessed to being “a little shocked by her comments; they were pretty out there.” They added: “Leilani kept going on about the Royals being a bunch of shape-shifting lizards… It was all very weird. She actually believes this stuff.”

“She babbles on about David Icke and how everything in his book The Biggest Secret has come true,” revealed another anonymous attendee. “She also thinks everything bad that happens in the world is a conspiracy, even 9/11. Some of the stuff coming out of her mouth was shocking… She’s nuts!”

That Dowding’s dinner party companions wound think of her as “nuts” for questioning the official version of 9/11, or for finding the Royals a little scaly in appearance, is not at all surprising when you consider that the vast majority of the population either has no interest in conspiracy theories or finds them objectionable. The question, then, is why would someone like Dowding – who’s been voted as one of FHM’s “top 100 sexiest women in the world” – hold a strong interest in such matters? 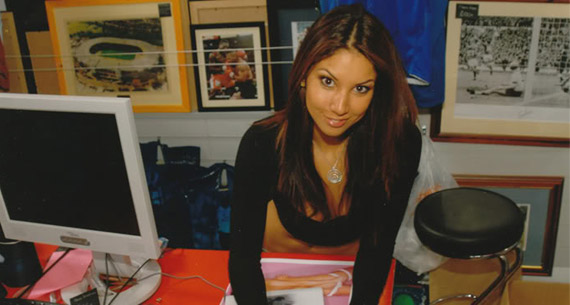 Dowding, who currently works as a fashion designer, clearly isn’t your typical celebrity. Whereas most celebrities have absolute faith in their government and no desire whatsoever to question the status quo, Dowding is fiercely suspicious of the powers that be, stating in a recent Twitter post regarding Barack Obama: “Can you explain how a man who just passed the use of drones on US soil to kill US citizens with no trial, has a Nobel Peace Prize?”

The image of Dowding presented by the mainstream media is of a woman who’s becoming unhinged from reality, her interest in conspiracies being a sign of mental instability. Stated The Sun: “Friends of the model told how Leilani has become socially withdrawn after [undergoing] a painful divorce… and now prefers to be alone with her three dogs.” The newspaper added that Dowding now spends most of her time reading “books about aliens and conspiracy theories… rather than seeing her chums.”

Fortunately, Dowding doesn’t fit the “bimbo model” stereotype. In fact, she has a reputation for being quick-witted and articulate. After receiving high grades in school, she started – though never completed – a degree in economics at the prestigious Royal Holloway University, in Surrey, choosing to quit her studies in order to pursue a career in fashion and modeling. Asked to comment on the “weird” and “shocking” statements she made recently, she confidently told The Sun: “I did say all that. I thought it was common knowledge. I truly believe there are powerful forces at work that keep the truth from the public.”

She added: “Anyway, what’s weird about believing in aliens? It would be pretty sad to find out that we are truly alone in the universe. I hope we’re not!”

Betty, Barney, E.T. and the Military