A couple of days ago I was interviewed for a UK-based radio show that included a question and answer session in which members of the audience submitted questions via the chat-room. One of those questions was along the lines of: "As a writer and researcher on paranormal topics, how weird does your life get?" Well, now and again, it gets very weird. Maybe it even gets beyond weird. Here's just one of many examples...

It’s fair to say that I have had some strange days and nights in my time, but Sunday, August 5, 2012, was spectacularly odd, even by my standards! Very early that morning, I flew out of Dallas-Fort Worth International Airport to Los Angeles, California for a day of business. I was due to be interviewed for a TV show on the then-looming "2012/End of the World" controversy when distinct strangeness reared its odd and uncanny head.

As I was being checked-in at the hotel I was staying in, which was only a short journey from LAX Airport, I quite literally did a double-take when I noticed that the name-badge of the chap on the front-desk was - wait for it - Charles Fort! I was like: “WTF??!!” It didn't end there.

My room number was 1163. Only a day before my flight, I had been working on an article on the JFK assassination and its alleged UFO links. When was JFK shot? November 1963. Or: 11/63. My room: 1163. Not only that: on August 5, 1962, exactly fifty years earlier to the day that I was, right then, deeply immersed in LA-based weirdness, Marilyn Monroe bowed out of existence under highly dubious circumstances. And where did Marilyn die? Brentwood, which just happens to be found in western Los Angeles!

Part of the theme of the article I was working on only 24-hours before my flight was the claim that JFK, shortly before Marilyn’s death, had told her – as his part-time bed-buddy – the truth about what happened at Roswell, New Mexico on that fateful day back in July 1947. On top of that, no less than the following day, August 6, was Charles Fort’s birthday.

After completing the shoot for the show - on what turned out to be the non-event of the year  - and then crashing out for a while and pondering on the high-strangeness that was afoot, good mate Greg Bishop came over to the hotel. We drove back to his place, chatted, caught up, and then went and got an early dinner, as we were going to do Greg's radio show - Radio Misterioso – later that night.

Before the show, Greg shared with me a veritable treasure-trove of UFO-themed material he had acquired some years ago, from the UFO researcher and author, Bill Moore. Contained in the vast collection of material was a copy of the FBI's declassified file on infamous Contactee, George Hunt Williamson. I said to Greg I wished he had the file when I wrote my book, On the Trail of the Saucer Spies (which told a great deal of how the U.S. Government spied on the UFO community throughout the Cold War), but he didn't, and so be it.

At this point, I should explain that although the file was titled “George Hunt Williamson” a significant portion of its pages were devoted to yet another Contactee - an equally controversial one - Truman Bethurum. I wrote extensively about Bethurum in my Contactees book. He was the lucky old geezer who claimed flirty encounters in the Nevada desert in 1952/53 with a hot alien space-babe known as Captain Aura Rhanes, a denizen of the planet Clarion. 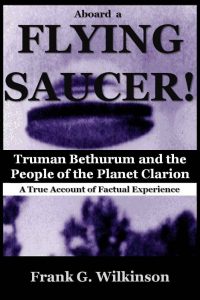 Yes, the usual wacky and absurd Space-Brother stuff that no-one should take literally. I am, however, firmly of the opinion that something happened to Bethurum, and most likely something of a hypnagogic nature. Old Truman was quite taken by Aura, who he described as being “tops in shapeliness and beauty” and whose space-outfit, he memorably told the readers of his book, Aboard a Flying Saucer, “did fit so snuggly.” There's really not much I can add to that, except to note the amusing fact that it seems the FBI was quite taken by Her Royal Hotness from the stars, too.

In the papers on Bethurum, an FBI agent (whose name is blacked out on the available files) relates the story of how Bethurum met curvy Aura, who is described as - and I quote the Bureau's agent directly – “…a ravishing woman commandant.” I had to wonder what was going through the mind of the agent writing that!

Then, after digging into the file, it was time for Greg's show, in which we covered everything from the aforementioned oddness at the hotel, the Aura Rhanes saga, the state of paranormal-themed “reality” TV (a clue: it’s all rubbish), and much more of a controversial and Fortean nature. Finally, there was the trip back to the hotel, before an early Monday morning return to Dallas.

So, that was my weird weekend, one which involved an encounter with Charles Fort (or, rather, an encounter with a Charles Fort), the JFK assassination, a bizarre catalog of date-connected synchronicities involving the dead prez and his blond Hollywood honey, a sexy space-captain from a far-away world, and an FBI special-agent so captivated by that same space-captain he could only refer to her as a "ravishing woman commandant."

I wondered on the flight back to Dallas: is our “reality” just a big, chaotic joke on the part of some deranged computer-programmer in a strange and unearthly dimension of Matrix-style proportions? It could be. If so, maybe I took far too many red pills the night before…