Out of Body Abductions

One of the aspects of so-called "alien abduction" experiences that fascinates me is the way in which some witnesses report their mind and visual-senses becoming detached from their physical body during the course of the encounter. Two cases, in particular, stand out. UFO researcher, good friend, and author Greg Bishop, says of one particularly relevant case from 1973: "The main participant in that case was named Judy Doraty, and she had been driving back from a bingo game on May 23 of that year outside Houston, Texas, with her daughter, mother, sister, and brother-in-law." Suddenly, everyone in the car witnessed "a bright light in the sky" that seemed to be pacing them.

"On their return home," Greg continues, "the light was still with them and, ominously, moved in closer. The family, as well as a group who came running out of the Doraty house, was shocked to see a huge disk-shaped object with rows of windows float silently over the property and across an adjacent field. It soon shot off straight up into the sky, going from 'very, very big to very, very little in a matter of seconds,' Doraty recalled."

Greg further notes: "She had been having nightmares and unrelenting stress since the experience, something that no one else in her family seemed to be suffering. The other passengers remembered that she had stopped the car and gotten out to look at the enigmatic light as it approached them. On March 13, 1980, [alien abduction researcher Dr. Leo] Sprinkle put Doraty in a relaxed state and brought her back to the point where she was standing next to her vehicle."

Doraty’s own words described a nightmarish scenario: "[There’s] like a spotlight shining down on the back of my car. And it’s like it had substance to it. I can see an animal being taken up in this. I can see it squirming and trying to get free. And it’s like it’s being sucked up. I can’t tell what the animal is. It’s a small animal." 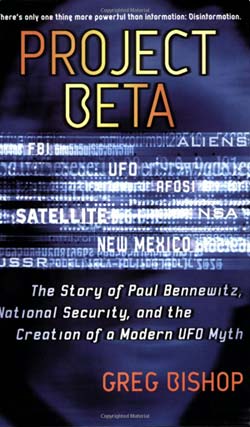 Greg Bishop uncovered a sensational story: “Doraty remembered that she was not taken on the craft she observed, but said that when she was outside, she experienced some sort of bi-location and was present on the craft and standing by the car at the same time [italics mine]. The 'small animal' turned out to be a very young calf, which was dissected on the craft with quick precision. The carcass was dropped back on the ground.

"With some difficulty, she also recalled seeing her daughter being examined. She got back into her car and drove home, the craft now a distant blob of light following them at a distance all the way home, where it then swooped down not fifty feet from the ground while the amazed Doraty family watched. After zipping away, it hung in the sky like a bright star long enough for everyone to go inside and return several times to see if it was still there.”

Consider, too, the following. On May 5, 1980, Myrna Hansen was driving to her Eagle’s Nest, New Mexico, home from a trip to Oklahoma with her young son. Hansen suddenly found herself in a nightmarish world. Under hypnosis she recalled a classic alien abduction in which she was taken on board a UFO, undressed, and subjected to a physical examination. While on board, she also witnessed a “struggling cow sucked up into its underside in some sort of ‘tractor beam.’”

More controversially, Hansen stated that after the abduction, she had been taken to an underground base, had seen “body parts” floating in vats, and felt that some sort of “device” had been implanted in her body so that the aliens could monitor and control her thoughts.

When details of Hansen’s description of the underground base were relayed to Kirtland Air Force Base security, they immediately recognized that Hansen was describing a fortified section of one of its facilities: the Manzano Weapons Storage Complex, which, at the time, was the largest underground repository of nuclear weapons in the Western world. The U.S. Air Force seriously addressed the possibility that Hansen’s abduction experience had occurred in some kind of altered state, and that she had not, physically, been taken to the complex at all.

Greg Bishop learned that in 1980 Hansen was placed “under hypnosis with an Air Force psychologist” and described in great detail one specific facility at Manzano. Said Bishop: “Myrna Hansen could have been an ‘accidental remote viewer’ when in an altered state induced by her experience, whether by aliens or through other means more close to home. Unhooked from normal consciousness, she ‘knew’ that she would later be questioned by the Air Force, and the fact that she was near such a secret installation could have caused her to lock on to it."

Greg adds: "Admittedly, this scenario is far-fetched," but notes that the Air Force "couldn't come up with anything better. Eventually, they were satisfied that this was a one-time event, and that she hadn't been able to see or sense anything else of concern.”

Maybe so, but Myrna Hansen's experience is important and instructive, since it parallels the experiences of Judy Doraty, in the sense that both women underwent abduction experiences in which some part of them was somehow detached - deliberately or not - from the physical body and transported to another location.

UFOs and Deer Men in Oklahoma