Greetings, fellow Coppertops! On this week's mission we'll explore miracle cures & black-op diseases, drone invasions & zombie outbreaks, celebrity sightings of UFOs & unknown civilizations on the desert. And as we discover the secrets of Europa's hidden oceans, we'll learn how alien life can be found right here on our own planet. A note of warning to all Springbreakers joining us: Wet-shirt contests are STRICTLY forbidden aboard the Nebuchadnezzar!

10 We start our trip with very good news from the Conference on Retroviruses and Opportunistic Infections in Atlanta: Dr. Deborah Persaud, a virologist of the John Hopkins University in Baltimore, announced that a baby girl with HIV had been fully cured using conventional drugs, which could mean that a treatment for infants suffering from the disease in its early stages could be developed.

With this baby the doctors opted for a more aggressive treatment than usual, which seemed to have taken the virus out of the girl's blood system before it could take refuge in her body. Thus, she's now been declared 'functionally cured', and her treatment opens a window of hope that in the not-too distant future we'll be able to eradicate the so-called 'plague of the XXth century.'

9 Unfortunately we still have along way to go in order to cure cancer, which claims the lives of millions of people world-wide regardless of their status or position. Such is the case of Hugo Chávez, the dicta-- um, I mean 'president for life' of Venezuela, who succumbed to his 2-year-long battle with cancer last week.

A controversial figure all his life, it's no wonder that his death has managed to spark a few conspiracy theories: from his political heir --now interim president-- Nicolás Maduro blaming the American government & the CIA for the untimely death of the leader of the Bolivarian revolution, to some pundits speculating whether Chávez had been secretly flown to Cuba & died there instead of in Venezuela.

Personally I'm a bit disappointed that we didn't have a chance to have a REAL conspiracy theory a-la 'Moon Over Parador' style:

8 Maduro has recently announced that his beloved Comandante will be embalmed & his body preserved on a glass sarcophagus for all posterity... or until Chávez rises from the grave --thanks to a secret Amazonian ritual-- to exact his revenge on the Yanqui empire. Damn! too bad Oliver North does not direct horror flicks...

While an attack of Communist mummies doesn't seem of particular concern to the American government, a zombie outbreak seems to be a different matter, in light of FEMA's planned 'zombie UFO crash' disaster drill which will be taken place in Nevada next April, which leads me to believe there are some serious fans of Half Life working on that agency. 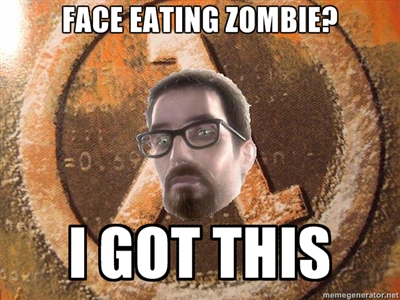 But David Lory VanDerBeek, candidate for governor of Nevada, is sure no fan of Gordon Freeman nor FEMA for that matter, an in a recent statement on his website condemning the lack of transparency re. the drill, he made a rather head-scratching remark:

"Personally, I do not believe in UFOs or zombies and neither does anyone in the federal government. It is quite likely that our government has a created a bio-chemical weapon that can induce zombie-like behaviors in humans and therefore assist in a mass murder event to promote global depopulation without taking the blame."

Wait, WHAT?? A military zombie gun? Has VanDerBeek been privy to classified information or is he just wooing (Ha!) the tinfoil hat-wearing vote?

7 Speaking of tinfoil hats, a 35-year-old man from Louisiana wearing one --to deflect microwaves entering to his head, of course-- was arrested after threatening to burn down 4 schools. A mugshot of this fella makes me think he's burned a lot of stuff all right --possibly after rolling it with paper. 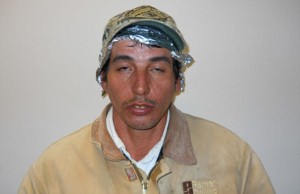 Pfft! Amateurs... EVERYBODY knows you need to keep your tinfoil hat on the outside for maximum efficiency, as shown by this gentleman and his feline handler. 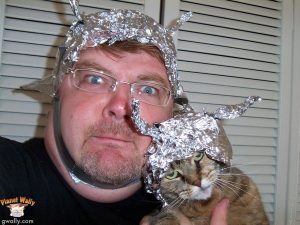 6 But no amount of tinfoil is gonna protect you from a drone, which seem to be proliferating like a damn locust plague right out of the Old Testament. Right now the FAA is investigating a possible drone sighting reported by both a passenger and the pilot from an Alitalia flight as the plane was making its final approach to the John F. Kennedy airport in New York.

“We saw a drone, a drone aircraft,” the pilot said, according to audio posted on the website LiveATC.net, which aggregates air traffic communications.

The pilot reportedly spotted the unmanned aerial vehicle as he was preparing to land at 1:15 pm Monday, but was able to touch down normally and did not have to take any special measures to avoid it, CNN reports.

Details about this alleged unmanned vehicle have not surfaced on the news that I'm aware of, but the fact that this 'drone' was spotted at an altitude of 1,500 feet would lead us to suspect this is not your typical RC toy plane. It's possible that in the future, as drones become more common, blocking mechanisms will be installed which will prevent them from reaching the altitudes used by commercial flights.

...But what if it wasn't a terrestrial drone?

5 Until the FAA determines the exact origin and nature of the object observed over New York, it technically remains a UFO. Another UFO story which provoked a lot of comment this week was started by the famous Kiwi actor Russell Crowe, when he (or someone using his account) uploaded a 'time-lapse' video --in reality a timed exposure-- made with photographs he took on Woolloomooloo --not enough 'o's with that name IMO-- 4 years ago.

Alas, before we could start theorizing that perhaps aliens have fetish for places with silly names --mount Popocatépetl, for instance-- some skeptic gladiators were quick to debunk the video, which seems to be nothing more than the reflection of a boat passing by. Better luck next time, Russell --you still kicked ass with your performance of Javert, mate!

4 Another 'celebrity' --this one from the realm of alternative history-- who has been constantly attacked & ridiculed for his ideas is Egyptologist John Anthony West, ever since he proposed that the Sphinx is thousands of years older than what is commonly accepted, and was built by an advanced civilization that predated the Egyptian dynasties.

Orthodox historians were quick to ask: "where's the evidence for these more ancient civilizations?" because back then they were still under the assumption that, before Egypt & Mesopotamia, there were nothing but tribes of hunter gatherers too busy trying to stay alive to waste time building megalithic constructions. But then came the discovery of Gobekli Tepe and all those cynic voices were forced to stay silent.

Now a new discovery of an advanced civilization which inhabited the Arabian peninsula more than 9000 years ago is forcing us to reconsider our theories of animal domestication. Among the objects unearthed in the remote region of Al Magar is the statue of a horse --or to be more precise, the ancient relative of our modern horses.

According to Ali bin Ibrahim Al Ghabban, vice-president of the Saudi Commission for Tourism and Antiquities, DNA and carbon-14 (radiocarbon) tests are continuing. But initial evidence suggests that the artefacts date back 9,000 years.

"These discoveries reflect the importance of the site as a centre of civilisation," he told BBC News.

"It could possibly be the birthplace of an advanced prehistoric civilisation that witnessed the domestication of animals, particularly the horse, for the first time during the Neolithic period."

What more surprises will we find in the desert sands, left long ago by these mysterious horse lords? a Neolithic version of Helm's Deep perhaps?

3 Getting back to John Anthony West, his famous documentary Mystery of the Sphinx dabbled a little bit in the enigmatic relationship between ancient Egypt & the planet Mars --the word Cairo after all, is derived from Al Qahir, the Arabic name for Mars...

Mars was in the news once again this week when it was announced that new 3D radar reconstructions of the Elysium planitia --a geographical region along Mars' equator-- show buried flood channels, furthering the evidence for a more wetter period in the Red Planet's past.

But the reason I found this news so interesting, which was obviously not mentioned in the mainstream channels, is that before the finding of these channels the Elysium planitia was already famous for some other formations: the Elysium pyramids. 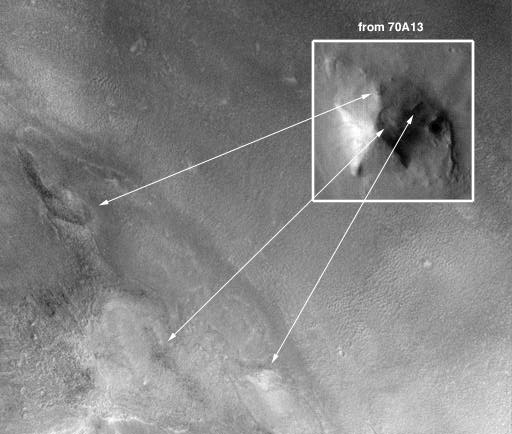 Even Carl Sagan in his book Cosmos wrote that the pyramids deserved closer scrutiny. And how auspicious that in the same region where possible evidence of a Martian civilization is located, we now find evidence that this region was also rich in water --precisely what a civilization would need to survive!

2 With liquid water life is not only possible: it is almost inevitable. Using the Keck II telescope and the Osiris spectrometer in Mauna Kea --yet another Egypt synchronicity-- astronomers have detected what lies beneath the ice sheet of Europa, one of Jupiter's moons: a huge ocean of salt water. According to Mike Brown, a scientist at Caltech who co-wrote a paper on the Jovian satellite, Europa's oceans would be a lot like ours. Thus, the only ingredient needed for the evolution of life would be some sort of energy source --likely an active volcano heating the water & provoking the creation of complex chemical compounds. 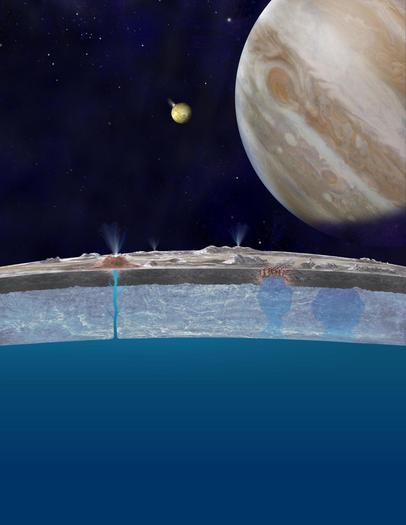 Today’s technology gave researchers their best image yet of the moon’s chemical fingerprint. There’s salt, sulfur and possibly even magnesium -- all chemicals found on Earth.

Outside of landing a microphone on the surface and listening for whales below, Brown joked, landing something on Europa for a soil sample is the best option.

“We have the technology to do it,” Brown said. “Europa just sticks out like a sore thumb, with this place with huge amounts of water.”

1 The best place to test the technologies for a future mission to Europa would be the polar regions of our planet. In this regard, the Russians seem to be ahead of everybody else, now that they have successfully drilled into the interior of lake Vostok, taking back samples of water that had remained isolated for millions of years. And what did they find? ALIENS --or at least, the closest a scientist has come to finding life different to what we already know on Earth:

"After excluding all known contaminants, bacterial DNA was found that does not match any known species in world databases," Sergei Bulat of the St Petersburg Nuclear Physics Institute told RIA.

"If it (the bacteria) had been found on Mars, then without a doubt we would have said there is life on Mars - but this is DNA from Earth," he said. "We are calling this life form unidentified or unclassified."

Pozdravlyayu, Sergei! But just a word of caution, tovarishch: keep an eye on the dogs, and keep your flamethrower close --because you never know...

Until next time, this is RPJ jacking out. Remember what I said about wet shirt contests, bros? Well that ALSO stands for mud-wrestling contests too, dammit!!

Real Places Lifted Out of Your Nightmares