UFOs and Deer Men in Oklahoma

A line of clouds began to roll into Lawton, Oklahoma, when Kyle Heying stepped outside his work at Dillard’s one summer evening in 2010. When he lifted his camera up to his eye, he didn’t suspect what the clouds would bring. “I took a picture of the sunset,” he said. “There was nothing special in the sky except for a summer thunderstorm that was brewing to the south.”

When he prepared the photograph to post on a social media site, he discovered he’d captured something more than clouds. “I did not notice the object until later while reducing the image size and preparing it for posting on my Facebook page,” he said. “I still have yet to identify what it is.”

A sharp, dark mark just under the approaching storm stood out. When Heying enlarged the photo, he found the object appeared to be metallic, and the shape unlike anything that should be flying over Oklahoma. “The object from that evening thunderstorm still does not make sense,” he said. “Everyone who sees it gets confused.”

Confusion from the object is nothing like what Heying saw in the Wichita Mountains National Wildlife Refuge just west of Lawton. Heying, who now lives in Stillwater, Oklahoma, has often visited the 59,000-acre preserve to take photographs of the night sky. One night, he saw something he wished he hadn’t. ”I'm an amateur astrophotographer and astronomer,” he said. “A friend of mine and I go to the Wichita Mountains to do a lot of our own … astrophotography if the weather is permitting.”

Heying and his friend arrived in the mountains near dark in early Spring 2012 intending to stay until 1 a.m., but around 10 p.m., something strange happened. “Shortly before 10, the wildlife began to make a lot of movements,” he said. “Normally while out there, we were at the entrance to Boulder Creek which is a popular astrophotography site at the mountains, you will have some longhorn, elk, buffalo, and coyotes in the distance or nearby even for that matter.” 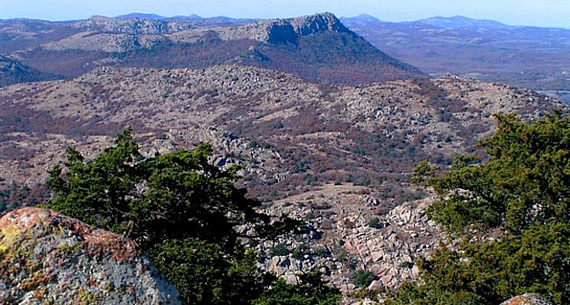 The coyotes yipped and howled as normal, but as the night crept near 10 p.m., the coyote sounds grew fewer, and more distant. A herd of Rocky Mountain elk, reintroduced to the Wichita Mountains, hurried by, followed by a small herd of normally aggressive America Bison that skirted the asphalt parking lot where Heying had parked, “by five feet and did not bother us.”

Then the feral hogs came. “We always go armed with either a handgun or one of our rifles for safety,” Heying said. “They are loud and extremely dangerous. They ran right past us.” 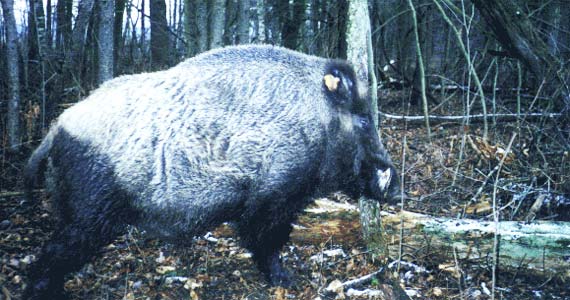 All the animals ran south, then the air changed. “It became deathly silent, and the air became ominous, and we felt an odd pressure; we started packing everything into my trunk quickly,” Heying said. As the two men put their cameras and telescopes into Heying’s car, something rustled in the tall grass just north of them. And it was coming closer. The men jumped into Heying’s car, rifles at the ready.

“We moved to another observation site to the northeast at the base of Mount Scott, the highest point out there,” Heying said. “We did a U-turn in the parking area and as I made the turn my headlights lighted up a human figure with a head I can not easily describe.”

The creature didn’t look human. “It was as though it had the head of a buffalo or an elk, while standing upright with two legs and two arms that were human,” he said. But the eyes were what terrified him. “The eyes were a dark red.”

Terror consumed Heying, and he didn’t know if he were looking at a beast, or a man in a mask. As the car’s headlights moved over the creature, it jerked as if hit. Heying punched the accelerator and tore away from this red-eyed monster. He didn’t slow until he reached Medicine Park, Oklahoma, two-and-a-half miles away. “We were scared shitless,” Heying said. Sitting in the car at the creek that splits the town of less than 400 at the entrance to the wildlife refuge, the silence outside grew ominous.

“Things got even quieter when we stayed there,” Heying said. “While there we heard one ear-piercing screech or scream, almost a hunting screech of some sort that made my hair stand on end and gave me goose bumps even worse.” The scream echoed through the night; Heying is sure it came from Mount Scott, where they’d just been. Where they saw the beast.

“With that we left the mountains completely, we felt as though we were not wanted there that night,” he said. “The way the wildlife acted, the figure that we came across (that) the animals had to have ran from, and then the scream of which I can only find references to happens to be the Banshee.”

It’s been a year, but Heying knows the image of the beast he saw in the Wichita Mountains National Wildlife Refuge will haunt him forever. “I cannot forget that figure we saw, as well as the scream,” he said. “It was not human but it was not of any wildlife I am familiar with from out there.”

A Monster Brought to Life