Read Part 1 of Encounters with Gnomes

Pointed hats, long white beards, two-foot stature; gnome-like entities were once part of daily life in Scandinavian countries. John Carlson of New Jersey, author of the blog “The Paranomalist,” remembers his Grandma Alice’s stories of these entities well. Grandma Alice, born in 1891, and raised in Sweden, knew of the mischievous nature of these gnomes, the tomtar (also spelled tomte). “When I was a boy she told me stories of the tomtar,” Carlson said. “Small beings that took the appearance of old, bearded men.” Grandma Alice told him the tomtar were generally benign until a human upset them, then they would curdle milk, or break items around the house. Carlson said his grandmother told stories of seeing tiny tomtar footprints in the mud and snow.

Dr. Scott A. Mellor, professor with the University of Wisconsin-Madison, teaches Scandinavian Mythology and said these creatures were once important in some parts of Scandinavia, but that was a long time ago. “I am rather sure people may have believed in them over a hundred years ago, comparable to current belief in ghost,” he said. Today the tomtar has been relegated to the stuff of legend, although some Scandinavians still observe ancient customs when it comes to keeping these gnomes happy. “Because of tradition you might find people who still leave oatmeal, gröt, out during Christmas, but it is rather equivalent to leaving cookies for Santa Claus.”

But sometimes, stories of these gnome-like creatures can be much too real.

When Tammy moved herself and her three children to the country house by the Tule River near Porterville, California, she didn’t know something wicked waited for them. “We always got the feeling of being watched,” Tammy said.

One spot on the farm especially put her on edge, the barn. The family animals, dogs, a cat, turkeys, chickens, and ducks avoided that rickety, dark building. “We had had a lot more chickens and ducks but they had started disappearing,” Tammy said. “I also noticed that none of the neighbor’s animals, or stray animals for that matter, would go anywhere near that barn. It was without a doubt just creepy.”

She soon discovered why. “One evening my son, who was seven years old at the time, and I had just come back from grocery shopping,” Tammy said. “We parked and got out of the car and as I was opening up the back to get the groceries out I noticed a movement out of the corner of my right eye.”

As she lifted a grocery sack from the car, she saw the movement again. “This time I heard a very freaky, very evil-sounding chuckle,” she said. “I looked in the direction of the sound and there standing about 50 yards from my son and I was what I can only describe as a gnome.”

The creature, about two to three feet tall, wore baggy black pants, and a gold-colored shirt. A salt and pepper beard ran from beneath a red, pointed hat. “That thing grinned at us and the creepy grin spread from ear to ear and its teeth were a gross brown and pointed or jagged,” she said. “It had a bulbous nose and large, deep-set eyes.”

She dropped the groceries, and grabbed her son, the wicked little man cackling after her as she ran to the house. Tammy burst inside through the kitchen and slammed the door. As she tried to tell her daughters about her panic, something moved outside the kitchen window. She looked, and saw the top of the thing’s red, pointed hat. It had to be about ten feet off the ground.

The thing eventually disappeared from the window and Tammy retrieved the groceries from the car. She never saw it again, but until the day she moved, she heard the gnome’s creepy chuckle coming from the old barn.

Although Tammy’s family had gone, the gnome wasn’t finished terrorizing whoever lived in that house.

Charlie, her husband, their two-year-old twin girls and two golden Labrador retrievers moved into the two-story house by the river in March 2010. “The house was perfect for us,” she said. “Exactly what we were looking for, and we couldn’t wait to move in. There are three bedrooms, a huge kitchen, dining room and living room and lots of windows all around it.”

The deck that opened off the back door overlooked the woods and the nearby Tule River. A deck in the front overlooked a pond. Charlie placed fairy, gnome, and toadstool yard ornaments around the pond, and stocked it with Japanese koi fish to make it feel more like their home.

One day, while walking back from the river to the house with her daughters and their dogs, the dogs became riled. As they approached a rickety outbuilding Charlie called “the shack,” the dogs began to snarl and bark, the hair in their backs standing up. “Something told me to run so I grabbed a twin under each arm and ran for home,” she said. “Something about that shack gave me the creeps, especially at night, but I don’t know why.”

She began to notice none of the animals, not even wildlife or stray cats, would go near the shack, until the day she heard the fight coming from inside. “It sounded like a cat was in a fight with something way bigger than it was,” she said.

Her husband grabbed a flashlight and ran to the shed. “Just as he got to the door the noise stopped,” she said. “He went in and looked around with the flashlight. There was a cat. It was totally skinned on one side and its neck looked as though some thing had taken a huge chunk out of it.”

He stepped outside the shack to catch his breath, and when he looked back in the cat was gone. “There was no way that cat moved by itself,” she said. “We were standing right there. Where did the cat go?”

They discovered the cat was the least of their worries.

One night around 3 a.m., a raspy, gurgling singing woke Charlie and her husband from sleep. “It was without a doubt the most hideous sound I have ever heard,” she said. “It freaked us out.”

Charlie and her husband looked out their bedroom window and saw something that challenged their sanity. “Standing by my pond holding one of my garden gnomes was what I can only describe as something out of a Grimm’s fairy tale,” she said. “The thing that was standing in our yard was hideous and grotesque.”

A human-like creature stood under the bright light of the motion detector. It was two to three feet tall, with a long gray beard, maroon pants, baggy yellow shirt, brown vest, a dark waistcoat, and a reddish brown pointed hat. “The thing that made this creature really hideous was its eyes and teeth,” she said. “It looked like it was grinning and its teeth were jagged and pointed. The eyes were little beady and dark and mean.”

As the creature stared at Charlie and her husband, it reached into the pond and grabbed a koi, dropped the fish into its mouth and swallowed. Charlie’s husband pushed the window open a few inches and screamed at the creature, telling it to leave their yard or he’d call the police. The gnome grinned, laughed, and gave them the finger.

They told the police they’d had an intruder, but the officers looking around their yard at 4 a.m. found only shoeprints the size of a small child. 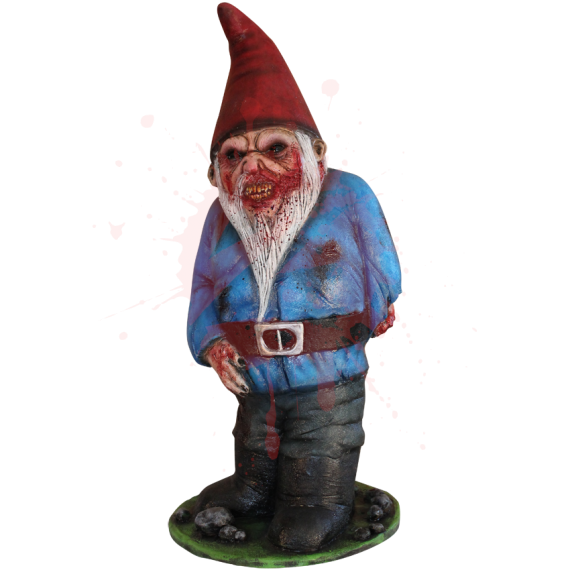 The gnome came back night after night, holding a yard ornament and eating their fish. They eventually moved the ornaments and put the fish into a tank in the house. They instantly realized they’d made a mistake. “One night after we had removed the fairies and gnomes and fish from the yard the creature showed up at the usual time, 3 a.m.,” she said. “When it found that the yard ornaments were gone and the fish were gone it went crazy. It was yelling and screaming something that we couldn’t understand, but we did understand that this thing was pissed and wanted us to know it.”

The gnome ran around the house, screaming and gurgling. Then Charlie realized the dog door was unlocked. “It was big enough for our dogs to go through and it would be big enough for that creature to go through as well,” she said. “I took off running down to the kitchen and as I got there the dogs had started barking like crazy at the doggy door.”

She shut and secured the dog door, then ran upstairs to shut the windows. “A fear hit me like nothing I had ever felt and I ran back up to the twins’ bedroom where they were both sound asleep in their cribs,” she said.

Neither parent slept that night; they decided to leave the farm at Porterville. “The last we heard of that creature was a very loud screeching, cackling sound,” she said. “It was under one of the living room windows and when my husband went to check it out he saw the top of that creature’s hat under the window. Right then we decided that we were out of there. We couldn’t stay there with that creature.”

Did Tammy and Charlie live in the same house? I wanted to know, so I told Charlie about Tammy’s experience. “The description of that barn and everything else sounds just like it, and the Tule River runs behind the house,” Charlie said. 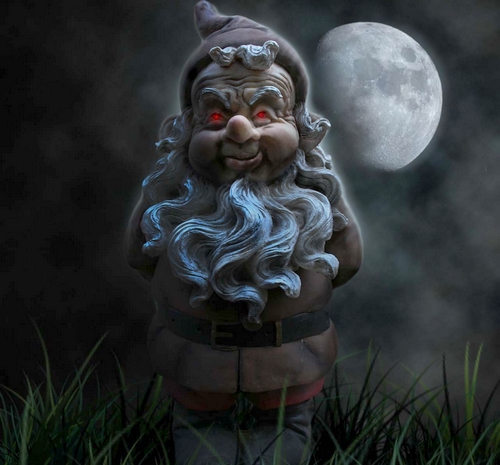 Her experience was too terrifying for her not to find out. “It’s too creepy to think that there are more of those creatures,” she said. “I would like to speak to those other people and find out if we were in the same house or close to it.”

I put Charlie in contact with Tammy. “Charlie sent me an email and she described the house that she lived in,” Tammy said. “She started naming some of the side streets and then I knew it was the same house or really close to it.”

The women eventually met and drove to the property. “It definitely was the same place,” Tammy said.

As Tammy stood, looking at the house where a three-foot tall man with pointed teeth, and evil cackle had laughed at her, she saw someone had torn down the barn. “Even with that shack gone the whole place still had an eerie feel to it and I don’t know if that is because of what we dealt with while living there or just the place itself,” Charlie said. “I don’t think I’ll be going back there again.”

Before they left, the women approached their old house and knocked on the door. The current resident did not want them there. “She was just hateful and when we tried to ask her about the barn she pretty much told us to get lost and not in those nice words,” Tammy said.

Charlie was equally taken aback. “We tried to ask about the shack and if she had ever experienced anything while it was there but she didn’t want to talk to us,” Charlie said. “In fact, she told us to leave the property. She didn’t have to tell me twice. I was happy to get away from there.”

The Nonhuman Factor: Who’s Who Among the Non-Physical?