Phantom Helicopters of the UK

In the latter part of 1973, a series of distinctly unusual events began to quietly unfold above the green fields and rolling hills of northern England that subsequently triggered a strange, and still-ongoing operation coordinated by an elite division of the British police force. It all revolved around the phenomenon of phantom helicopters. Of the varied elements that make up what is popularly known as the “UFO phenomenon,” there can be few so strange as the phantom helicopter and its close relative, the even-more-sinister black helicopter.

For at least four decades, numerous people throughout the world have reported seeing helicopters, very often completely black in color and with no identifying markings, in areas that have been subjected to intense UFO activity. This has led a number of commentators to speculate that the helicopters are operated by covert groups from within the military-industrial complex and that they are involved in a surreptitious UFO monitoring program. 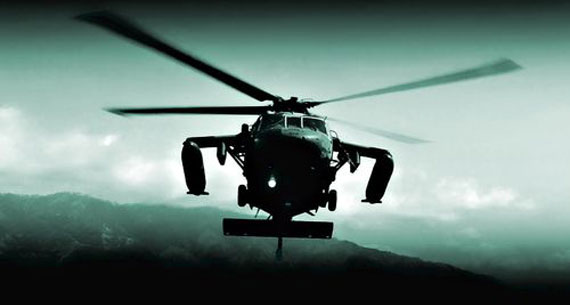 Many such cases, if not the overwhelming majority, surface from within the United States. Few people, however, realize that Britain had its own run-in with the phantom helicopters in a specific period of time that ran from late 1973 to early 1974. It was a run-in which ultimately attracted high-level, official interest and concern.

Indeed, it was revealed in the press on January 15, 1974 that police forces throughout the North of England had been alerted to look out for any unusual helicopter movements in their vicinity. For six months, night sightings of unidentified helicopters had been filed in both Cheshire and Derbyshire, something confirmed by Cheshire Police, who stated the following:

“We don’t know of any reason why the helicopter should make these trips at night. Obviously we are anxious to find out. Apart from anything else, the helicopter crosses one of the main flight paths to Manchester Airport. There is an obvious danger to the aircraft going into the airport. We are very interested to know what is happening. We hope to be able to trace the pilot and put some suggestions to him. It would appear the pilot is in breach of civil aviation laws. A special license is needed to fly a helicopter at night.”

A spokesperson for Derbyshire Police added: “All sorts of things spring to mind but we have pretty much ruled out that it is anything to do with illegal immigrants, and nothing appears to have been stolen in the areas where the aircraft has been sighted.” 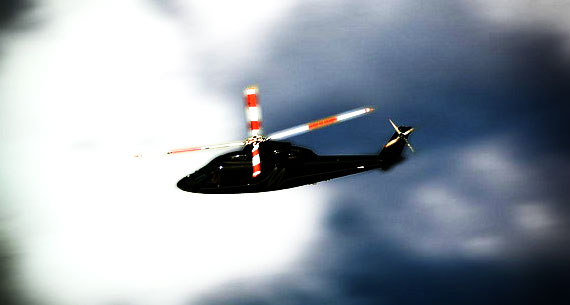 Although Cheshire Police expressed their opinion that only one helicopter was involved in the nighttime sorties, Staffordshire Police admitted on January 16 that their officers had received details of no less than fifty encounters with the phantom helicopter across Staffordshire, Cheshire and Derbyshire.

While the reasoning behind the following conclusion was never disclosed, Staffordshire Police said that their inquiries had led them to believe that the phantom helicopter mystery originated in the London area, and added that whoever was flying the craft was either highly skilled or “completely crackers."

Still more phantom helicopter reports surfaced in Staffordshire, this time near the town of Newcastle-under-Lyme. In response to inquiries made by the Birmingham Post newspaper, police confirmed that they had received “several reports…of it being heard in the north of the country. All traffic controllers report that no flight plans for a helicopter have been filed. We do not know what it is up to.” 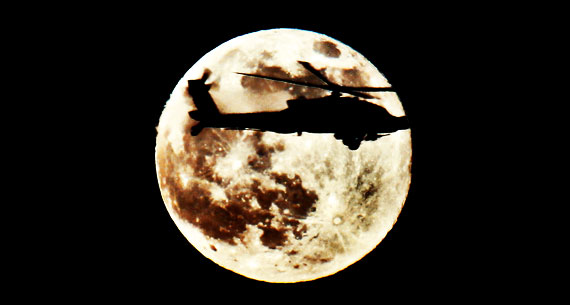 Darley Moor, Derbyshire, was the site of a strange incident in the early hours of January 18. An unnamed person informed police that they had seen a “single, bright light” flying at an unspecified altitude over the Moor. Derbyshire Police declined to speculate as to whether or not there was a connection with the helicopter sightings, but confirmed that an investigation had been set in motion.

The probability that a number of helicopters were responsible for the many accounts on record is supported by the fact that a multitude of additional reports surfaced on January 18. The county of Cheshire was the location once again, and reports poured in from Bramhall, Prestbury, and Scholar Green.

More sightings of unusual aerial lights and phantom helicopters were reported throughout mid-January 1974. Possibly one of the last recorded encounters of this particular wave took place on the evening of January 24, 1974, when Paul Gelling, sub-editor at the Birmingham Evening Mail newspaper, saw a “white descending light” in the sky at Aston Catlow, near Stratford-upon-Avon. “The light fell from the sky and seemed to explode into blue and green,” said Gelling.

Precisely who was flying the oddly elusive phantom helicopter was never fully resolved – at least, not to the satisfaction of the public and the media. Numerous theories were formulated within the corridors of power, however, with much of the attention focused upon the possibility that the many and varied helicopter sightings were linked with the activities of the Irish Republican Army (IRA). 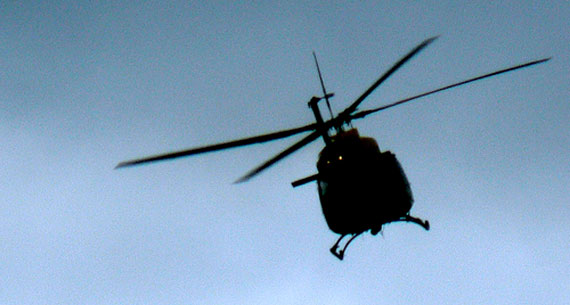 Following a series of phantom helicopter encounters in and around the area of Buxton, Derbyshire the Metropolitan Police Special Branch initiated an operation to try and resolve what was taking place. Special Branch studied twelve encounters reported to police in Derbyshire in September 1973, including one actually filed by police personnel, who reported “a positive identification of an Augusta Bell 206A Jet ranger helicopter.”

And as Special Branch ominously noted in its now-declassified files on the matter:

“The machine was observed on a number of occasions over a period of two weeks to be apparently practicing landings in the vicinity of the sites of quarries and explosive stores in the Derbyshire countryside. Special Branch Constable [Deleted] has made numerous enquiries to discover the ownership and reasons for the flights from various sources but has yet to establish any positive facts. He has contacted an experienced Royal Air Force helicopter pilot with night flying experience who explained that night flying in the Derbyshire areas would be extremely dangerous due to the nature of the terrain and to the number of overhead pylons in the area.” 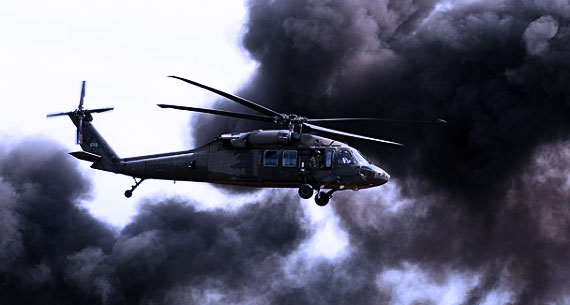 The report concluded that there was a “strong possibility” of the flights being “of an illegal nature."

Sightings of the phantom helicopters continued through March 1974 – something that prompted a meeting to be held at Horseferry House, London, on the 21st of that month that was attended by senior officers from the Derbyshire and Cheshire constabularies, Special Branch, the Home Office, and the Ministry of Defense.

Intriguing and eye-opening plans to utilise Harrier Jump-Jet aircraft and Ministry of Defense helicopters in response to phantom helicopter encounters were deemed too costly and ultimately impractical. A unanimous agreement was reached, however, for a continual monitoring of the situation, if indeed such action was considered necessary.

As it transpired, however, no further reports were filed, and the Home Office asserted that “...the helicopter and the pilot were never identified.” For some, the mystery lingers on...

Attack of the Deranged Vampire: A Pairing of Tall Tales?