Now and again, I'm asked for my views on the so-called Alien Big Cats - or ABCs as they are also known - of the UK. Britain, of course, is not home to any sort of indigenous cat of the exotic and large kind. Yet, people report seeing such creatures all the time, and usually of the black or tan-colored variety. I'm convinced that some of these beasts are flesh and blood in nature. Others, however, I'm not quite so sure about, since I have more than a few reports on record of ABCs vanishing in the blink of an eye, or even seen in association with strange lights in the sky.

So, what might these other ABC's be, if not wholly flesh and blood? For a possible answer, we have to turn to an old and sinister tradition known as the Taigheirm. Merrily Harpur, a British big cat researcher and the author of Mystery Big Cats, said of the Taigheirm: “This was an infernal magical sacrifice of cats in rites dedicated to the subterranean gods of pagan times, from whom particular gifts and benefits were solicited. They were called in the Highlands and the Western Isles of Scotland, the Black-Cat Spirits.”

The rites in question, Harpur added, “involved roasting cats to death on a spit, continuously for four days and nights, during which period the operator was forbidden to sleep or take nourishment, and after a time infernal spirits would appear in the shape of large, black cats.” 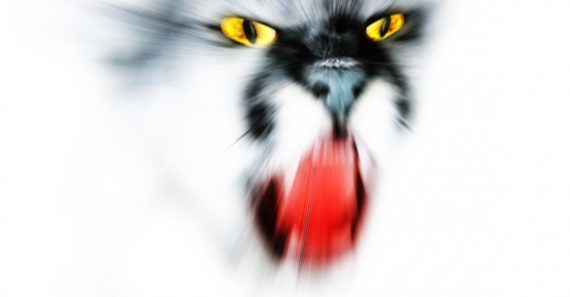 Without doubt the most detailed description of this archaic and highly disturbing rite can be found in the pages of J.Y.W. Lloyd’s 1881 book, The History of the Prince, the Lord’s Marcher, and the Ancient Nobility of Powys Fadog and the Ancient Lords of Arwystli, Cedewen, and Meirionydd. Since Lloyd’s words are vital to understanding and appreciating the weird story that will soon unfold in its unsettling entirety, I make no apology for quoting the author at length:

“Horst, in his Deuteroscopy, tells us that the Highlanders of Scotland were in the habit of sacrificing black cats at the incantation ceremony of the Taigheirm, and these were dedicated to the subterranean gods; or, later to the demons of Christianity. The midnight hour, between Friday and Saturday, was the authentic time for these horrible practices and invocations; and the sacrifice was continued four whole days and nights, without the operator taking any nourishment.”

On this matter, Horst himself said of the cruel rite: “After the cats were dedicated to all the devils, and put into a magico-sympathetic condition, by the shameful things done to them, and the agony occasioned to them, one of them was at once put alive upon the spit, and amid terrific howlings, roasted before a slow fire. The moment that the howls of one tortured cat ceased in death, another was put upon the spit, for a minute of interval must not take place if they would control hell; and this continued for the four entire days and nights. If the exorcist could hold it out still longer, and even till his physical powers were absolutely exhausted, he must do so.

“After a certain continuance of the sacrifice, infernal spirits appeared in the shape of black cats. There came continually more and more of these cats; and their howlings, mingled with those roasting on the spit, were terrific. Finally, appeared a cat of a monstrous size, with dreadful menaces. When the Taigheirm was complete, the sacrificer [sic] demanded of the spirits the reward of his offering, which consisted of various things; as riches, children, food, and clothing. The gift of second sight, which they had not had before, was, however, the usual recompense; and they retained it to the day of their death.”

Lloyd took up the story from there: “One of the last Taigheirm, according to Horst, was held in the island of Mull. The inhabitants still show the place where Allan Maclean, at that time the incantor, and sacrificial priest, stood with his assistant, Lachlain Maclean, both men of a determined and unbending character, of a powerful build of body, and both unmarried. We may here mention that the offering of cats is remarkable, for it was also practiced by the ancient Egyptians. Not only in Scotland, but throughout all Europe, cats were sacrificed to the subterranean gods, as a peculiarly effective means of coming into communication with the powers of darkness.

“Allan Maclean continued his sacrifice to the fourth day, when he was exhausted both in body and mind, and sunk in a swoon; but, from this day he received the second-sight to the time of his death, as also did his assistant. In the people, the belief was unshaken, that the second-sight was the natural consequence of celebrating the Taigheirm.” [15]

At this point in his narrative, Lloyd elected to quote Horst: “The infernal spirits appeared; some in the early progress of the sacrifices, in the shape of black cats. The first glared at the sacrificers and cried ‘Lachlain Oer’ [Injurer of Cats]. Allan, the chief operator, warned Lachlain, whatever he might see or hear, not to waiver, but to keep the spit incessantly turning. At length, the cat of monstrous size appeared; and, after it had set up a horrible howl, said to Lachlain Oer, that if he did not cease before their largest brother came, he would never see the face of God.

"Lachlain answered, that he would not cease till he had finished his work, if all the devils in hell came. At the end of the fourth day, there sat on the end of the beam, in the roof of the barn, a black cat with fire-flaming eyes, and there was heard a terrific howl, quite across the straits of Mull, into Morven.”

Lloyd himself then continued: “Allan was wholly exhausted on the fourth day, from the horrible apparitions, and could only utter the word ‘Prosperity.’ But Lachlain, though the younger, was stronger of spirit, and perfectly self-possessed. He demanded posterity and wealth, and each of them received that which he has asked for.

"When Allan lay on his death-bed, and his Christian friends pressed round him, and bade him beware of the stratagems of the devil, he replied with great courage, that if Lachlain Oer, who was already dead, and he, had been able a little longer to have carried their weapons, they would have driven Satan himself from his throne, and, at all events, would have caught the best birds in his kingdom.

“When the funeral of Allen reached the churchyard, the persons endowed with second-sight saw at some distance Lachlain Oer, standing fully armed at the head of a host of black cats, and everyone could perceive the smell of brimstone which streamed from those cats. Allan’s effigy, in complete armour, is carved on his tomb, and his name is yet linked with the memory of the Taigheirm.

“Shortly before that time also, Cameron of Lochiel performed a Taigheirm, and received from the infernal spirits a small silver shoe, which was to be put on the left foot of each new-born son of his family, and from which he would receive courage and fortitude in the presence of his enemies; a custom which continued till 1746, when his house was consumed by fire. This shoe fitted all the boys of his family but one, who fled before the enemy at Sheriff Muir, he having inherited a larger foot from his mother, who was of another clan. The word Taigheirm means an armoury, as well as the cry of cats, according as it is pronounced.”

In 1922, Carl Van Vechten commented on this particularly nightmarish ritual in a footnote contained in his book The Tiger in the House. It reads: “The night of the day I first learned of the Taigheirm I dined with some friends who were also entertaining Seumas, Chief of Clann Fhearghuis of Stra-chur. He informed me that to the best of his knowledge the Taigheirm is still celebrated in the Highlands of Scotland.”

Could it be the case that the Taigheirm still exists today? Certainly, I have heard such rumors, which makes me wonder deeply about the true nature of at least some of those ABCs of the UK...

When Paranormal Entities Change Their Own Rules