The Demon Drink: Alcohol and Spiritualism

Everybody enjoys a drink or two every now and then, and I'm sure that it's safe to say that everyone's had more than their fair share at least once. The consumption of alcohol has been a common past-time for countless generations, with early beer pots being found dating back to the earliest forms of the Mesopotamian Empires and Indus Valley. But consuming alcohol has not only been used as a way of leaving our troubles behind; not simply a gateway to the realm of "What was I thinking last night?". Alcohol has had a long - and somewhat strenuous - history with religion, spiritualism and the occult. But what benefits could an ice-cold beer really have to your inner self? If you shake your martini at the same rate as your vibrations, could you unlock the portal to the next dimension?

The imbibing of alcohol has been a common theme throughout various forms of spiritualism, incarnations of worship and mutations of almost all religious denominations. From the worship and reverence of the ancient Greek deity Dionysus, god of wine and fertility, to the widespread practice of the Eucharist (commonly known as the Holy Communion) as a sacrament in forms of Christianity and Catholicism, alcohol has long been seen as a representation of beings beyond our existence. Or at the very least, the result of a really good magic trick. Nice work, Jesus Copperfield! 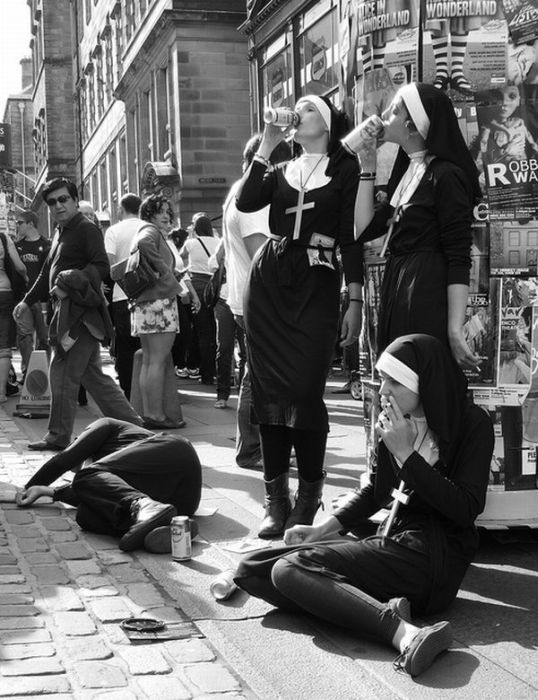 The Aztecs were well aware of the properties of alcohol - known as octli (now pulque) - and were a necessary component of the worship of the lunar and terrestrial gods, known as Centzon Totochtin. To the ancient Egyptians, wine was an expensive commodity, drunk by those who could afford it - which wasn't many - and used in burial rights and traditions. The consumption of alcohol in Egypt, which was primarily beer and wine, was most often associated with Osiris, the god of resurrection, as he was the god worshiped the most abundantly. Offerings of alcohol were made to Osiris at times of special events or occasions. The belief that, upon dying, an individual travels to the afterlife (which, by the way, required the consent of the pharaoh), was accompanied by the belief that one would take their possessions with them. And the most popular carry-on luggage for inter-life travelers? Beer. And lots of it. 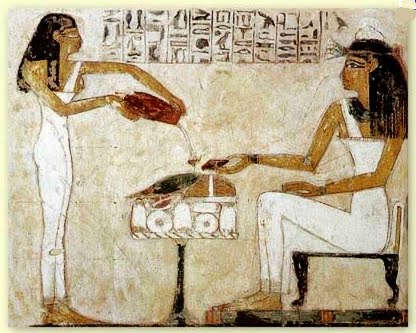 In more modernistic spiritualism - and by modern, I of course mean perfect for Mysterious Universe - alcohol is generally viewed as one of two things: 1) A gateway substance which allows demonic possession of the drinker, or 2) A source of positive and negative energies from the surrounding dimensions.  Both sound like fun, right? 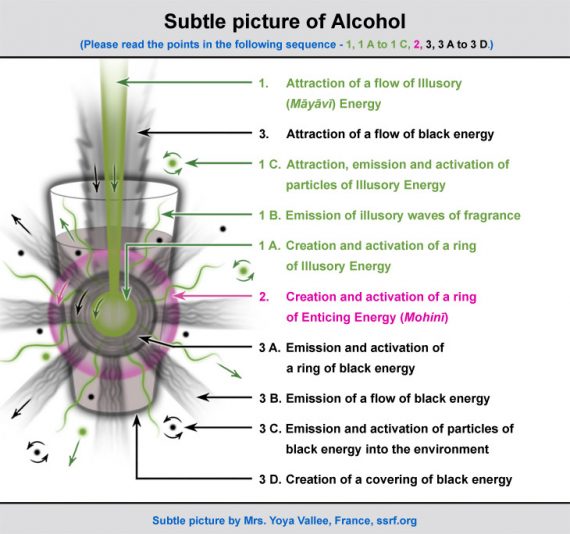 The Spiritual Science and Research Foundation denote the above 'subtle drawing' as a diagram of the vibration energy being emitted and absorbed by alcohol. In this New Age theory, alcohol is believed to cause our loss of control of our mind and intellect, which allows 'black energy' to enter and wreak its black energy havoc! Possessions of the body become more likely and your 'inner-self' can become endangered...apparently.

This 'black energy' theory has more than a few similarities with the belief that drinking alcohol allows Hell's demons to possess our bodies. I mean, it has less eternal damnation and more inter-dimensional vibrating, but it's pretty much the same thing! And sure, maybe having a little too much may make us act a little demonic, but that may be the extent of it. Besides, the people who claim that alcohol causes demonic possession are the same people who claim that watching pornography, having angry outbursts and being unconscious cause demonic possession, so I guess nobody wins!