Looking back within the fossil record to around 300 million years ago, paleontologists today have managed to pry open a historical window to the past, and learn a lot about the kinds of deep-sea beasts that were swimming the warm waters of Earth's deepest oceans. Though seldom, there have also been the occasional "holdovers" that harken from an earlier age, and by studying such creatures, we've managed to learn even more about how certain species may be able to sustain themselves for extended periods, given the right ecological conditions.

Most recently, this practice has been put to use, and with great success, in the proper DNA sequencing of a creature known as the coelacanth. This prehistoric, blue-tinged and beastly-looking fish has managed to exist virtually unchanged in the waters off the coast of Africa for hundreds of thousands of years, which of course begs the question as to whether other species around the world might have been capable of doing the same. 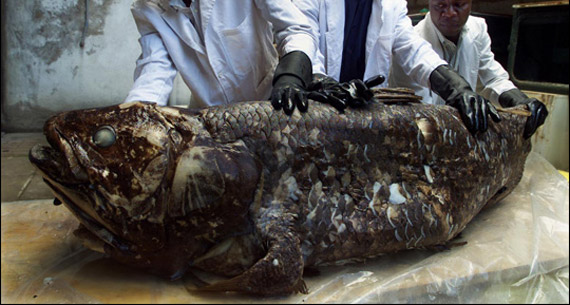 Though many would call it wishful thinking, strange reports that date back hundreds of years involving the murky lake known as Loch Ness in the Scottish Highlands, have captured the imagination of those seeking to prove that larger aquatic species--and perhaps even those of prehistoric size and appearance--might still inhabit specialized environments in the world's remote corners. But recently, another notion as to how the idea of a "monster" in the Loch has been offered by British media, and one which perhaps does more to show the influence of today's "conspiracy culture" on the media. Hence, the question is, does Loch Ness really have a "monster," or is the existence of Nessie instead merely the result of conspiratorial collusion between the area's hoteliers in search of a viable market for tourism?

The original BBC News story has been reported in various other news and alternative media, existing on the premise that there are fishy statements appended to one famous and early "whale tale" from the Loch. Writing for the BBC, Emma Ailes discussed the work of marine biologist and skeptical Loch Ness researcher Adrian Shine (known in cryptozoological circles as "the one with the enormous beard"), and how he noted recently that, "more than a few hotel proprietors (have been) among typical spotters," hence lending questions to whether stories about Nessie could indeed be a "conspiracy" to boost tourism:

It was 14 April 1933 and Mrs (Aldie) Mackay, manageress of the Drumnadrochit Hotel, was driving with her husband along the road to Inverness. As they drove, she glanced out across the still calm waters of Loch Ness towards Aldourie Castle. There, in the water, she saw something... "It went in a circle, round and down. She yelled at her husband "Stop! The beast!"

"It is an interesting remark," Mr Shine says. "But the fact that she said "the beast"... It's as though she knew there was something strange in the loch," Mr Shine says.

The BBC article goes on to note that Mrs Mackay's famous story was recounted the following month in the May 2, 1933 edition of the Inverness Courier, in an article by Alex Campbell, who had been a part-time journalist, as well as water bailiff for Loch Ness at the time. However, the BBC report, while noting the Mackay sighting as being the first in modern times, failed to even mention the title of Campbell's article: "Loch Ness has for generations been credited with being the home of a fearsome-looking monster."

Generations, huh? The implication here is that while the Mackay sighting helped bring popularity to legends of a monster in Loch Ness, the tradition of sightings in the area was far more involved, and perhaps more broad than the mere mention of a "beast" recorded in the ancient text, The Life of Saint Columba, which alleged that the cleric saved a man from the wrath of a hungry beast in the waters of River Ness. However, modern researchers again assert that, while there is indeed a history of stories pertaining to a beast in the Loch, it is difficult to find clear evidence of credible sightings that predate 1933, at which time the famous summertime sighting of Mr. and Mrs George Spicer became widely reported, along with that of hotelier Aldie Mackay.

However, as the BBC article itself notes, while Mackay's story appeared in print two months prior to the famous Spicer sighting, Aldie had not come forward with the story on her own accord; choosing to remain anonymous, it was her husband that shared the story with Campbell, as Shine also divulges:

"She was far from a self-publicist. It was her husband who told the water bailiff, and she stayed anonymous in the newspaper report. She didn't say anything for two reasons. Firstly, because she thought she would be seen as self-advertising. But also because they used to say for people who had seen something in the loch 'take more water with it,' suggesting they were drunks."

So had Aldie Mackay been involved in a "conspiracy" to draw tourism to Loch Ness back in 1933, working quietly along with other hotel and local business owners to increase public speculation about the nature of the Loch's potential wildlife? It seems unlikely, at best, and if the "thing" she witnessed were indeed anything other than a monster, it would be more likely that she had, in fact, seen something, but it could possibly have been misidentification of an otherwise known beast. Sine Mackay's original description of the creature had been that it was "whale-like", it stands to reason that she had not been lying about her encounter, but that a creature such as a very large sturgeon could have indeed fit such a description, especially if seen from a distance.

To assert that the fabeled existence of a Loch Ness Monster has more to do with a "conspiracy" actually seems to say more about modern attitudes today, especially when driven my the modus operandi of contemporary journalists who are hungry to find a compelling new slant for their stories.