The mysteries Of The Round House Part I – Dark Rituals

Did a German secret society resort to human sacrifice to stem the tide of the First World War in Germany’s favour? Was the builder of a house that became known as The Round House a member of this order? Were human remains found, and was there a geoglyph in the shape of the supreme god of Nordic mythology carefully hidden in the landscape around this enigmatic edifice? Does the landscape itself offer more clues pointing to a carefully constructed occult geography? Was all of this known in certain select circles and was that the reason that the house was destroyed in 1967?

These questions and many others haunt a rural village in the Netherlands. The mystery has been known for some time by a select group of journalists and writers who were in possession of the same, fragmentary source. Last year, the situation changed with the publication of a book that has left me with more questions than answers. Titled De Geschiedenis van Het Ronde Huis, Mysteries Ontrafeld… (The History of The Round House, Mysteries unravelled…), the book is the result of a study by an anonymous ‘working group’, consisting of seven persons. Sixty-five year old former bank employee Hans Schalkwijk is one of them. He is listed as the unofficial ‘author’ of the book and acts as spokesperson for this group. He became interested in the mystery over forty years ago. 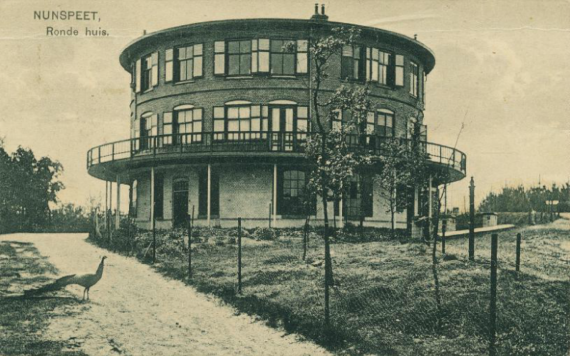 In the book the group claims it has spent a considerable amount of time, decades in fact, investigating the mystery of the Round House. It has built up a comprehensive archive on the case, it further claims, yet the book is unreferenced and much of the testimony in the book is by anonymous sources. I have not seen the archive. I only know it from Schalkwijk’s description, so I don’t know what it contains. Since the claims are so wild and there is no documentary evidence, the book has only led to more controversy, with fierce proponents and opponents. After a short flurry of minor interest, the national media have dropped the case.

But let us first examine the strange story of the mystery of the Round House itself.

A local hermit by the name of Johan Montenberg begins to tell a strange story to Schalkwijk, who he meets in 1972. Montenberg is a distrustful man. He doesn’t tell the story in one breath, but rather, by bits and pieces, by hints here and there, and by rambling letters to various persons, over a longer period of time.

What he hints at is hair-raising and unbelievable. A tale unfolds of secret rituals, a German occult order, and the abduction of young girls for human sacrifice. Mention is made of subterranean passages and a lime pit where the bodies of the hapless victims are disposed of. As recent as 2011, a local weekly states that human remains were found in 1916 and the corpse of a young girl in 1917. A police investigation at around 1924 is said to have been halted on ‘orders of superiors’. All of this is said to have occurred before, during and after the First World War. In that war the Netherlands had a neutral status.

On these points though Schalkwijk is adamant. “There was no corpse found in 1924, no human remains were dug up. There is no system of underground passageways. I found absolutely no evidence”. Schalkwijk’s words were printed in a Dutch newspaper five months ago. Yet he remains convinced that around the time of the First World War a pagan-Germanic order existed that practiced occult warfare. 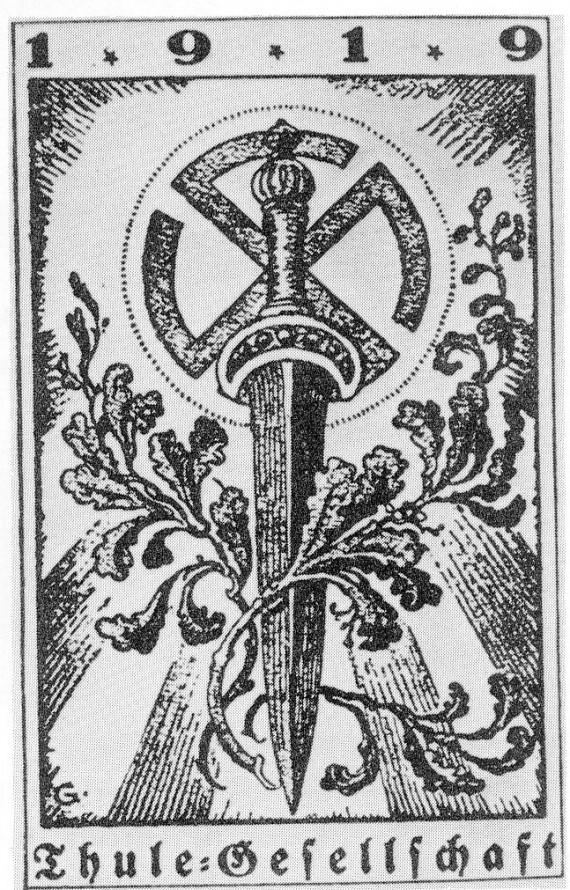 In the 19th and early 20th centuries, Europe was literally riddled with secret societies and occult orders, and Germany was no exception. Ariosophy, theosophy, anthroposophy and countless of other, lesser known sects, cults and orders flocked the streets. There was for instance the O.T.O. that came into existence between 1895 and 1904. Others were the Germanenorden, founded in 1912 in Berlin and having a swastika as its symbol. From it ultimately sprang forth the Thule Gesellschaft, formally founded in 1918. There were many more virulent antisemitic and Volkische orders. Political murders, especially after the defeat of Germany in the First World War were the order of the day. But no evidence has ever come to light of instances of human sacrifice in these German-Austrian occult circles, which makes the claims surrounding the Round House especially hard to believe. 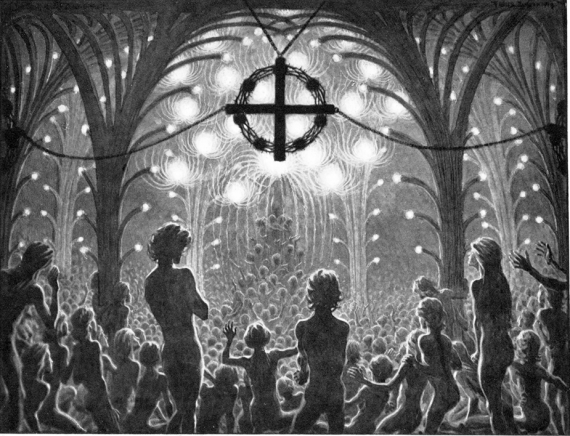 At the centre of the dark mystery stands a wealthy Dutchman, Frank van Vloten (1858 – 1930), who has a reputation for eccentricity. Some stories claim he always dressed in black, rode a black horse and was known as ‘the black devil’. In 1906 Van Vloten begins the construction of a curious building. It is a circular shaped stone house of three stories and a flat roof on his large estate near Nunspeet, a little Dutch town in a wooded area called the Veluwe. A private pony tram on a Decauville track delivers guests from the local train station to the building that quickly acquires the name The Round House.

Strange rumours begin to swirl around it although it is hard to say when this exactly started. It is said that a woman, dressed entirely in black, now and then visits the house. On certain occasions, it is claimed, she brings a number of young girls, veiled and also dressed in black with the private horse carriage. The children arrive, but are never seen leaving. It is said that some of the labourers who work for Van Vloten know what happens with these girls, but keep their mouths tightly shut out of fear of reprisals. When these rumours begin to emerge in the local Nunspeet newspaper in 1976, they are rebuffed and delegated to the realms of fantasy by others who visited the Round House in their childhoods. It is later claimed that the reporter who wrote the 1976 story immigrated to Canada because of serious threats made to his life. 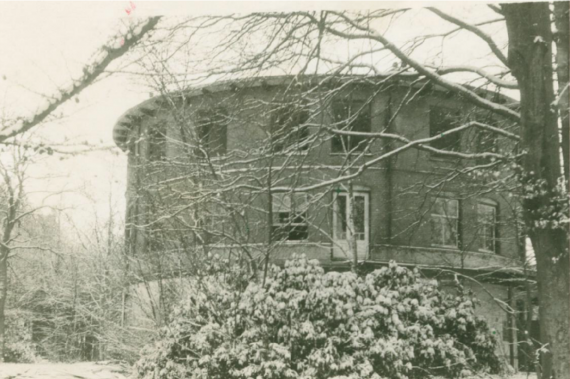 The book also cites an anonymous, handwritten account in a notebook. It is said to have been written by a man who hunted regularly during the First World War in the woods around the Round House. Read aloud to one of the researchers in 2006, it states in detail what happened:

“Had a conversation with H. in regards to the rumours about the Round House… He finally confirmed that German rituals took place on the grounds of the Round House. First in the house and then outside. Always at full moon. The girls, usually a number of about six, were given a drug to drink and were thus put in a state of hypnosis... At one of the small ponds, a sacrificial stone was placed on a pedestal. Next to it in an inclination in the ground a fire burned… The priest with a hood with two holes for the eyes killed the girl with a sword. It is not known who this man is. The group went back to the Round House and the priest stayed behind and disposed of the body…”

Other accounts surface over the years, such as this one by a by now deceased, local artist-painter:

“We were so poor, that I used to hunt a rabbit in the woods… One night I was at it again. At the pond I heard voices and saw a light gleaming. I hid behind a tree to have a look. At the bank of the pond there were a number of girls with oil lamps. They were standing in a half circle, facing the pond. Twelve to fifteen girls, probably twenty years old. In front of them was a woman facing them. A sturdy woman of about 40 years old. The girls wore white blouses and dark skirts, possibly red in colour. On their heads they wore some kind of hood. In fact more a band round the head with on their foreheads something glistening. Around their waits something that looked like a little apron or bag. The older woman wore a long, dark dress, possibly red in colour too. Something glistening was hanging on her chest. I think a chain or something. All the girls and the woman put up their right hand with two fingers in the air. It seemed like an oath taking. The older woman said something, after which the girls repeated it. Afterwards the woman threw something over her shoulder in the pond, perhaps a stone or a coin. Then the girls began to sing softly. During the singing a number of men approached the girls. They must have been standing farther away in the dark. I became frightened and left immediately.”

How much of these weird tales without any possibility of checking should we believe? That is the main gripe of the opponents and I can’t blame them. I have talked to Schalkwijk and asked him if he or the group he represents had any documentary, verifiable evidence for the existence of that German occult order. His reply was that he had three oral sources but no documentary evidence.

We will take a critical look at the problem of references in a further instalment. But first we need to hear what else Schalkwijk and his group have to say, as the story gets even stranger. They claim that there is, or rather was, evidence as to the occult nature of Van Vloten and his order. It is not found in archives, but in the landscape around the Round House.