Why the UFO Community Must Step Up Its Game

Arguably, two of the greatest problems inherent to the field of Ufology today are that approaches to studying UFOs are 1) not keeping up with available technology and 2) are perhaps, at times, being influenced negatively by technology more so than in ages past. I'll expound further on precisely what I mean by this in a moment, but first I must pose the very necessary question: will the serious study of UFOs continue to live up to the challenges of our rate of technological growth, or will the study of more advanced intelligence than our own become hindered by these advancements?

Bearing this issue in mind, I must say that seldom after reading many UFO blogs do I want to jump up and say, "Finally, somebody seems to get it!" But today, I admit to feeling a bit refreshed, in that there is someone who has seemingly called the present field of Ufology on the carpet, in addition to acknowledging that technology is not being properly employed in this failing effort toward the furtherance of UFO studies. This alone may not shake UFO research to its core, nor will it beckon saucers toward the ground from their lofty sky-born pinnacles of imagination where they continue to reside today; but changes in attitudes, I think, might still aid us in naming the problems inherent to this field, and ultimately, helping us move forward feeling (and acting) a bit wiser.

"I have some serious concerns," were the words that appeared over at The Big Study, a blog dealing with ufological matters penned by one calling himself "The Professor":

There are ways to adjust to this of course, but they all require civilian researchers to step up their games significantly, and create very strong and investigatively efficient linkages to the sites which are brainlessly accumulating the unprocessed data. If that doesn't happen, UFO research [with one exception] is over. The one exception will be historical research --- old cases/ old FOIAs newly released etc. The same thing would be true for hauntings, poltergeists, bigfoot, faerie, Fortean Falls, black dogs, etc etc etc. In every one of these types of spectacular event anomalies, the mere typing into a collecting site which is a dead end will ultimately result in the complete reduction of the anomaly to shallow entertainment in everyone's mind, and the anomalies will sink to the status of imaginary computer games. The UFO research community MUST STEP UP IT'S GAME!!!

Well said... and while for some it may come across as seeming a bit dramatic, the above statement inspires a number of questions about the current state of UFO research... questions which, routinely, I also find myself being attacked for even proposing for serious discussion (though I do so anyway... also in routine fashion).

Few would argue that the realistic capacity of computer generated imagery (just as we see already in "imaginary computer games") has progressed to a point where, at times, it can be very difficult to tell "real" from "fake." This has certainly been influential in terms of the study of UFOs, since rather than dangling hub caps from fishing line out in a Swedish field someplace, hucksters nowadays are more apt to render their illusions utilizing CGI technologies. With the levels of realism already what they are today, it can be difficult, to say the least, when one hopes to utilize any kind of photographic or video evidence in an effort to bolster the view that UFOs exist. This isn't to say, as I've already touched on, that UFOs couldn't have been hoaxed three four decades ago using film, but simply that efforts toward creating realistic-looking fakes have become far more accessible, and less easy to determine from "the real thing."

Which begins to lead to more troubling questions, such as what, precisely, IS "the real thing," anyway? Is there such a thing anymore? While most would say that, without any question, of course there are real UFOs that people witness from time to time, the serious UFO researcher also knows that the mere testimony of any individual claiming to see an unidentified aircraft is nearly worthless. Stories about UFO sightings are to be found just about anywhere these days, but they cannot, by themselves, do much in terms of furthering our effort to "prove" whether UFOs do exist.

Hence our present conundrum: the majority of the basis for UFO studies today involves collected eyewitness reports that, by themselves, do little in terms of "proving" anything. While some would still argue that the preponderance of similar reports must stand for something (and I think that they do, in fact, bear some merit), the collected body of UFO reports, compiled by various agencies since the early 1950s, still do little on their own in terms steering us toward a reasonable explanation for the UFO phenomenon. We're just about as "in the dark" as we've ever been, and we're still attached to the same preconceptions we've held as "facts" for decades now.

Obviously, there are things that can be done in terms of furthering our knowledge, rather than simply continuing to mindlessly "study" UFOs. However, as the Professor points out here, these things really aren't being done. For some time, I've spoken about the necessity for "very strong and investigatively efficient linkages to the sites which are brainlessly accumulating the unprocessed data," since to my way of thinking, compiling and rehashing UFO reports doesn't do enough on its own. 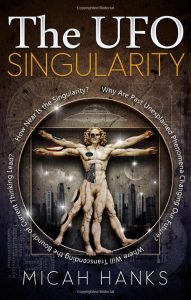 Hence my amazement when, after the release of my book The UFO Singularity, I found that many people considered the book to be "a rehashing of old cases" because I took time to examine the implications of statements and observations made by researchers like Jacques Vallee, Whitley Strieber, and several others over the years. The two names I've mentioned here, if anything, are fine (perhaps among the best) examples of individuals who have offered insights in the past, and not just "mindless" reporting on the UFO subject... the need for processing the data we have, and not just adding more and more useless information to our existing databases and entry systems, has become quite dire.

And yet, when we talk about "the next big UFO book," nobody wants anything that really seeks to understand the phenomenon. Instead, people seem to want what amount to being "campfire stories" that will intrigue them a bit, and of course, which can also be passed off as "new material," whether or not such stories really do anything to further our understanding of the UFO enigma at its core.

So will technology really continue to improve our ability to study UFOs, or will it only present more problems? Or, should we consider whether the "problems" we're facing are actually more the result of shortcomings in the research community, and a lack of knowledge (or interest) in using technologies that will actually help us move forward?

If I had to guess, I would remain optimistic, and while I think we'll eventually "get there," we may be experiencing a bit of a ufological "lull" right now nonetheless...

Jack Whittaker: A Victim of the Lottery Curse?