A UFO Dogfight in the Skies

Very often I'm asked why I am such a believer in the existence of a genuine UFO phenomenon, regardless of its ultimate point of origin - or points of origin. Well, the answer is very simple: there are certain cases that, despite rigorous study, it has proved very difficult to explain away in rational and down to earth terms. A classic example is a startling event that occurred back in the mid to late 1970s. It attracted high level, official attention and demonstrated that when it comes to UFOs, military firepower is no match for the true unknowns.

Strange and amazing things were afoot in the night skies of Tehran, the capital of Iran, on September 19, 1976. Those things revolved around nothing less than the pilot of the Iranian Air Force practically doing battle with a potentially hostile unidentified flying object. Not surprisingly, a U.S. Government file was created on the event.

For at least some insight into what happened on September 19, we are reliant upon one of just two pieces of evidence that have surfaced, via the Freedom of Information Act. The first is a three-page paper – titled Now You See It, Now You Don’t! – which was penned by Captain Henry S. Shields, USAF.  The second is a three-page document from the Defense Intelligence Agency. The latter reads like sci-fi. Astonishingly, it is nothing of the sort.

According to the paperwork at issue, it was not long after midnight on the 19th when people living in the Shemiran area of Tehran reported seeing strange, unidentified lights maneuvering directly overhead. Phone calls were quickly placed with local police and military authorities at Shahrokhi Air Force base. 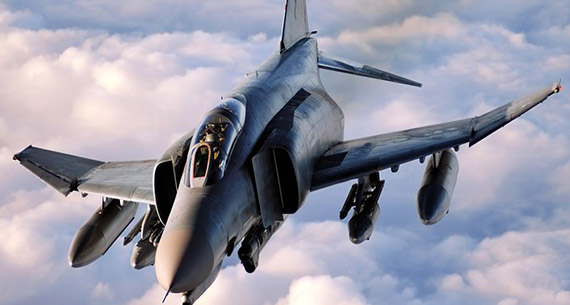 An hour or so after the first call reached staff at the air base, a McDonnell Douglas F-4 Phantom aircraft was scrambled to try and determine the precise origin of the enigmatic lights. And that’s when things got very interesting, as the following, extracted from the Defense Intelligence Agency’s report, reveals:

"At 0130 hrs on the 19th the F-4 took off and proceeded to a point about 40 NM north of Tehran. Due to its brilliance, the object was easily visible from 70 miles away. As the F-4 approached a range of 25 NM, [the pilot] lost all instrumentation and communications...When the F-4 turned away from the object and apparently was no longer a threat to it, the aircraft regained all instrumentation and communications."

Rather notably, the documentation adds: "The size of the radar return was comparable to that of a 707 tanker," which would have put its length in excess of 140 feet and its width more than 130 feet.

Despite the brief malfunctions to his aircraft, the pilot was not dissuaded by the actions of this unearthly, and uninvited, visitor. He diligently headed off in hot pursuit. That’s when a chase practically became an aerial dogfight. According to the DIA: "The object and the pursuing F-4 continued on a course to the south of Tehran when another brightly lighted object, estimated to be one-half to one-third the apparent size of the moon, came out of the object."

This smaller UFO didn't just exit its mother-ship: it headed straight for the F-4 at violent, breakneck speed. The pilot, reacting quickly in the face of something decidedly unknown, "...attempted to fire an AIM-9 missile at the object but at that instant his weapons control panel went off and he lost all communication." Seconds later, noted the DIA, the two UFOs joined as one and shot away. Not into the night sky, as you might imagine, however, but towards the ground. There was no crash, however, which is what the pilot was anticipating.

Rather, the pilot of the F-4 reported that, even at an altitude of 15,000 feet, he could see the object illuminating the desert floor, seemingly having made a perfect touchdown. Aliens, quite possibly, had just landed in Iran.

Given that the territory below was pitch black, the on-site investigation did not begin until the following morning, when the pilot was flown by helicopter to the area where the UFO had landed, which happened to be a dry lake bed. Whatever the true nature of the UFO - the Iranian military investigators who were also brought to the site concluded - it was now long gone.

And there we have it: an extraordinary event involving a UFO that (a) was highly maneuverable; (b) had the ability to run rings around a then state of the art military aircraft; (c) possessed the power to affect the workings of the aircraft's weapon system and communication system; and (d) attracted a great deal of interest within governmental and military circles.

So, when people ask me why I believe in the existence of UFOs, I refer them to cases such as this one. Yes, there are hoaxes. And, yes, there are mis-identifications. But, and here's the most important thing of all, there are also the unknowns. Those are the ones that interest me. And they are the ones that I believe to be worthy of deep study if we are to solve the riddle of what it really is that is among us.