As many students of Ufology will be aware, the last couple of decades or so have seen a rise in reports of one particular type of UFO. It has become known as the Flying Triangle. The FTs are triangular in shape and very often black in color, hence the name, of course! They often emit a low humming noise, and have a trio of lights on their underside. They usually have rounded corners too, rather than sharply angled edges. And, in some ways, they are not unlike the Northrop Grumman B-2 Spirit (otherwise known as the Stealth Bomber) in design. This has, quite naturally, given rise to the possibility that the FTs are next-generation Stealth planes, rather than true UFOs. It's not an unreasonable assumption. But there's a problem with that scenario: the FTs are actually not new, or even recent, at all.

While digging through a whole host of formerly classified files on UFOs at the National Archives at Kew, England in 1996, I came across a one-page report dated 28 March 1965 that, I confess, I almost overlooked. On closer inspection, however, I realized that it was potentially one of the most important UFO-related documents that I had ever come across. According to the MoD paperwork, on the night in question a witness saw at approximately 9.30 p.m. over moor-land near Richmond, North Yorkshire, England: "Nine or ten objects – in close triangular formation each about 100ft long – orange illumination below – each triangular in shape with rounded corners, making low humming noise." 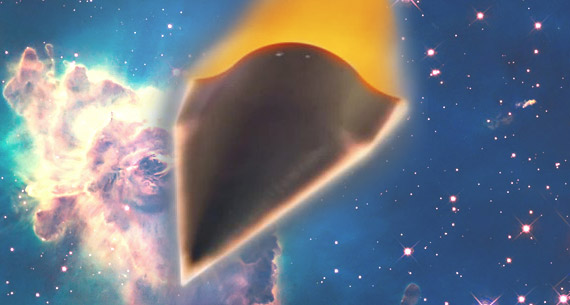 Interestingly, as noted in the first paragraph of this article, the "rounded corners" and "low humming noise" are precisely what many witnesses to Flying Triangle-style UFO encounters are reporting today – in a world-wide capacity, no less.

Recognizing the significance of this, I made a photocopy of the document and set about locating the witness, who is named in the files, I should stress. This did not prove to be a difficult task. I introduced myself and explained that I had located at the National Archives a copy of the original report that dealt with his sighting all those years ago. It is fair to say that the man was shocked, to say the least, to find that details of his long-gone encounter had been kept on file by the MoD for more than thirty years.

"Yes, I did send in a report all those years ago, but I didn't think they would have kept it all this time," he told me, with astonishment in his voice. As he explained, on 28 March 1965 at approximately 9.30 p.m., he had been driving through the North Yorkshire moors. On approaching the village of Skeeby, near Richmond, however, the engine of his car began to splutter and die. 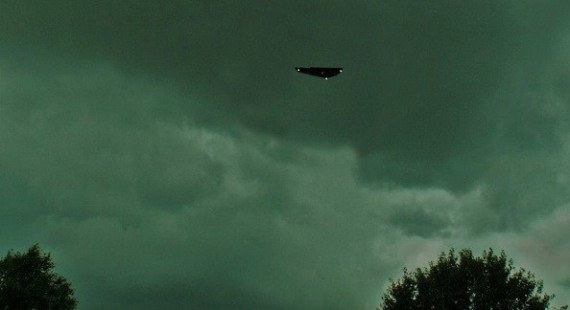 "It was a 1951 Ford," he states, adding with some humor, "and it was a good car but a bit unpredictable at times. I didn't want to break down on the moor because it was icy cold and the nights were still dark. I got out of the car to have a look at the engine and that’s when I saw this light."

He continued: "At first, because it was so dark, I wondered if it might be a weather balloon. But then I had a good look at it over the hedge and realized how big it was and how low down it was. It was about one hundred feet from end-to-end, about one hundred feet above the moors and shaped like a huge triangle and white, milky-white in colour.

"It kept coming towards me and then stopped about two hundred yards from me over the moors. It hovered for a while – nothing came out of it, but there was a light below it that just pulsated like a light bulb. There could have been quite a few lights on it but from a distance the light just looked like a glow. Then without a warning, it just took off at a speed that isn’t recognised. Good gracious, I thought, it must be a UFO! 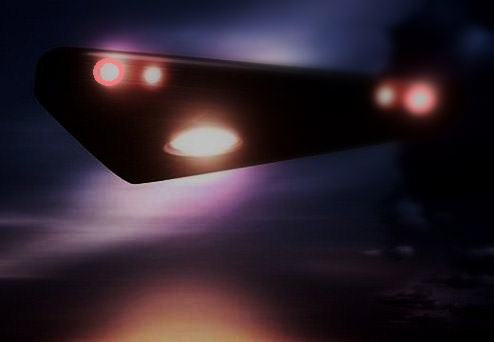 "As it shot up, not vertically but at an angle, it joined a group of others that were identical and that were in a triangular or V-formation. The others were very, very high; a whole fleet of them. They all then headed south, I think, at a tremendous speed and disappeared over the horizon. I saw the main one for no more than a couple of minutes," he recalls, "but after they had gone I was still stood by the moor watching this fleet disappear. I waited in case something else exciting happened, but of course it didn't." 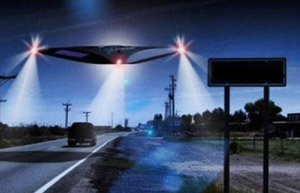 Curiously, shortly after the encounter, and after having reported the incident to the Ministry of Defence at Whitehall, the witness began to notice "awful red marks on my skin which were like a stretch mark, but they were like a deep salmon red and they kept coming and going. But I didn't have them before."

The most bizarre angle of the entire episode was still to come, however, as the man now graphically illustrates: "For about eighteen months after the sighting, I would get strange telephone calls from people. These would be every two or three months. They just phoned out of the blue but didn't introduce themselves. They just said they were from some bureau or other. They didn't mention the name of the bureau but kept mentioning 'sightings' and asked whether I had seen anything else strange. Had any men come to interview me?"

The witness was never visited by anyone with regard to his Flying Triangle encounter, nor did the MoD ever offer an explanation as to what it was that he saw on that fateful night in March 1965. He was, however, unnerved by those mysterious telephone calls - primarily because aside from informing the MoD of what had occurred, he made no other report (either official or unofficial) with anyone and kept the details to himself: "The only report I ever made was the one I sent to the MoD. It was so exciting that I had to tell someone."

This important testimony raises a number of vital questions. Why was someone so determined to find out if the witness had received any strange visits with regard to his encounter? Why the interest in knowing if he had had any other unusual encounters of a UFO nature? And most important of all: who was his mysterious caller?

Finally, if as some researchers contend, the Flying Triangles are a relatively modern day creation of the military, how is that an entire squadron of them - right down to the triangular shape, the underside-illumination, and the low humming sound - could have been seen flying over England almost 50 years ago?

Deceit, Lies & Deception: What Is The True Reptilian Agenda