The Enduring Mystery of the Brown Mountain Lights

They are one of the most enduring mysteries and natural wonders of the United States, and their mysterious presence has long inspired fantastic tales about ghosts that haunt the steep slopes of the Linville Gorge Wilderness. But these curious natural phenomenon--whatever their real cause--may hold the key to understanding some UFO sightings, or may even bear promise in the study of innovative new kinds of energy. They are the Brown Mountain Lights, and their intrigue has outlasted many who have come and gone over the last century, seeking to find the root of their strange presence.

Following my recent appearance on the Mysterious Universe podcast, I've been very happy to see that there appears to be as much interest in discussion about the Brown Mountain Lights as ever, with many emails, stories, and comments coming in from the listenership. One MU listener, a gentleman named Tom, had been eager to share his fascination with me about the phenomenon, which until hearing our discussion on the podcast, he had never heard of before. "I had never heard about the Brown Mountain lights," he explained, "and have been researching them since you mentioned it. I am obsessed." 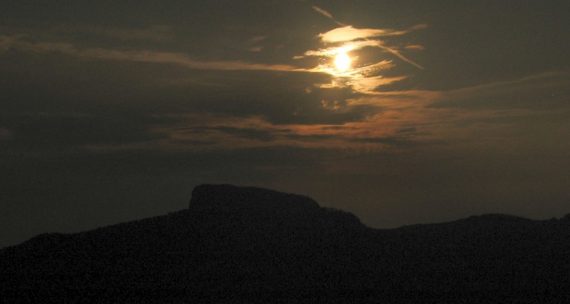 In honesty, I share Tom's enthusiasm, and find that it's hard not to become obsessed with the lingering mystery of the lights... which is the very reason why I have logged so many hours studying them, and the terrain over which they appear.

The ongoing interest people have expressed in the lights and their as-yet-undiscovered cause has prompted me to continue trying to provide educational information that seeks to address their presence from a rational, scientific perspective, which includes audio podcasts like this one, as well as videos documenting my research which can be viewed here. 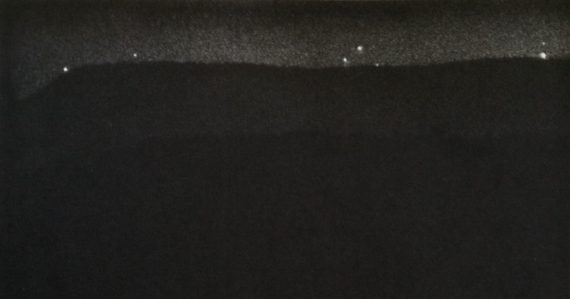 Of the unique items I have recently come across, also worth noting here is the photo above, which was apparently taken in the late 1950s or early '60s by photographer Bruce Roberts, and was featured in his wife Nancy's book The Illustrated Guide to Ghosts in 1974 (the image, as well as Nancy's account of the lights, had appeared in print years earlier, hence the presumed age of the photo. What I find particularly unique about this photo is that it appears to depict the lights hovering above the horizon, which would suggest that these illuminations had indeed been airborne. However, I should point out that we aren't certain as to what the conditions may have been at the time this photo was taken, such as the exact location where Roberts took the photo, or the elevation in relation to Brown Mountain. The orientation strongly suggests, however, that the image was taken from a gravel pull off at mile marker 20 off of Highway 181, which passess Brown Mountain on its route between the towns of Morganton and Linville.

Similar photos of what are presumed to be the lights can be viewed here, featuring the photography of Brown Mountain Lights researchers Bill Fox and Bob Ashmore. Bill and Bob have been coming to North Carolina for years to study the lights, and attenpt to photograph them. One of my all time favorite images of an odd, spherical light hovering over Table Rock, a large prominent mountain in the Linville Gorge, can be seen below, courtesy of Bill Fox's archives:

This image is similar to what is, arguably, the best photo of an aerial illumination over the Linville Gorge, taken in 2001 by photographer Charles Braswell. The image was featured in the Charlotte Observer, and can be viewed by clicking here. Perhaps the most important element that photographs like these present is the fact that aerial illuminations of unexplained origin do seem to account for some instances where the lights are reported. However, most conventional attempts at explaining the lights omit completely these kinds of reports, as well as the photos that seem to provide evidence of consistent, and strange-looking illuminations in the area.

My intention here is not to assert that there is anything "paranormal" about the cause behind the Brown Mountain Lights, although by definition, they are a variety of phenomenon which, albeit a natural one, seems to be produced by means that are complicated enough to have escaped scientific explanation until the present day. Thus, the reason for their endurance as a mystery is clear, and the challenge they present in terms of studying and documenting their cause also remains nearly unparalleled.