The Mysteries Of The Round House Part II – Occult Geography

Did a German secret society resort to human sacrifice to stem the tide of the First World War in Germany’s favour? Was the builder of a house that became known as The Round House a member of this order? Were human remains found, and were the outlines of a giant Wodan, the supreme god of Nordic mythology, carefully hidden in the landscape around this enigmatic edifice? Was the area surrounding the house witness to bizarre rituals? A shadowy group of investigators claims so. 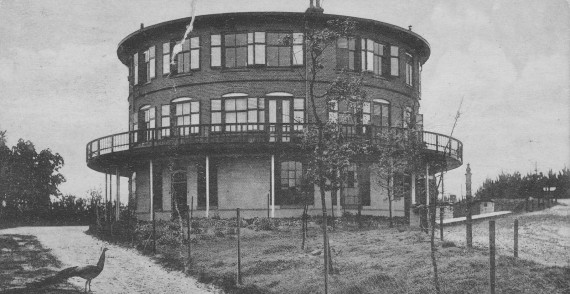 Around the 1900’s, the exact date or year is shrouded in uncertainty, wealthy estate owner Frank Van Vloten suddenly starts with a series of extensive landscape and garden projects on his estate. The labourers who work for him do not understand why, as almost everything they are ordered to do to makes no sense from an agricultural point of view. On the surface, there seems to be no logical plan behind the work. ‘But there was work, and therefore food on the table’, is the consensus among the labourers.

The working group investigating the mysteries that swirl around the house is set on the trail of looking at the landscape surrounding the Round House instead of delving through what archives remain, by a chance discovery. They find what they see as a clue in the files of a former SS affiliated archaeologist. Before World War II, the archaeologist had done some excavation work at the Mythstee. This is a spot in the vicinity of the Round House, since long rumoured to have been an ancient Germanic place of worship. 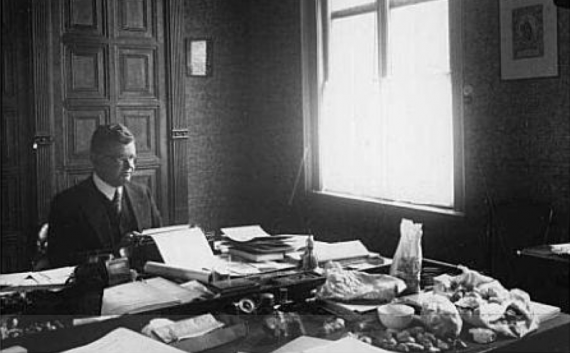 The former SS affiliated archaeologist, Frans Christiaan Bursch (1903-1981), seen above in the comfort of his study in the 1930's, has a chequered past, to say the least. During the Second World War, from 1940 to 1945, Bursch became a member of the N.S.B., a Dutch pro-Nazi organisation. 1943 finds him at the Ukraine, involved in excavations with the use of slave labour. Notwithstanding his N.S.B. membership and his affiliation to Heinrich Himmler’s occult research institute Ahnenerbe, he escapes any consequences after the end of the war in 1945. Until his death in 1981, he is a teacher in classical languages. Bursch, as might be expected from someone who had the dark overlord as his master, saw ancient German ruins and remains everywhere. In how far Bursch was working on a theory involving a giant pictogram and a geoglyph in the vicinity of the Mythstee, is hard to say. His remaining archive offers no further clue, and his post-war book makes no mention of it. 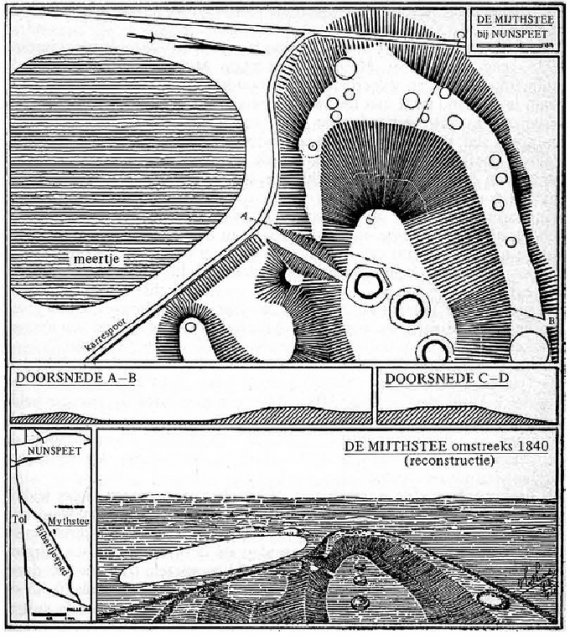 The Mythstee, another source points out, is a place of evil. He recounts vague rumours that ghosts and other strange creatures were frequently seen there. “Dark and bloody rituals said to have been conducted at the Mythstee and for a long time there were those that claimed that the famous Varus Battle took place there, and not somewhere in Germany. Wild German hordes whipped into frenzy by their druids sacrificed the vanquished Romans on the earthen walls of the Mythstee. This was the cause that the Pan-Germanic movement had a more than usual interest in that particular spot, as it was also placed on a ‘Heilige Lijn’, the German equivalent of a ley-line. This line allegedly was restored in 1891 by the Alldeutscher Verein. That was the motive for the construction of the Round House and its inhabitant, Frank van Vloten, was placed there under orders of the Pangermanic movement.” Modern archaeology though has established that the Mythstee is a curious, but natural formation.

What the working group finds in the files of the deceased archaeologist on the Mythstee is a depiction of the Giant of Cerne Abbas. Wondering about the presence of this seemingly unrelated image in that file, the question arises: would it be possible that the landscape surrounding The Round House might have hidden a similar figure?

In the light of this theory, the extensive work done on the estate begins to make sense. The landscaping, the planting or removing or relocation of bushes, the digging of certain ditches and paths and the creation of artificial hills all serve to create, in deepest secret, a giant figure of Wodan, only to be seen from the sky, with the Round House in its centre. For that is Wodan’s remaining eye.

Schalkwijk , the spokesman for the anonymous group investigating this mysterious house, claims that he and his group investigated the surrounding area with the use of soil investigations, measuring equipment and ‘other sources’. They arrive at the conclusion that The Round House and the estate were constructed according to ‘German rites’. Seen from above, the giant image of the Nordic god Wodan would be visible. The Round House is his one remaining eye. Schalkwijk even manages to reconstruct a helmet and a spear in the landscape. In a bush he recognizes a beard and moustache. They further claim to have found at the south a ditch in the form of a phallus, with a vulva nearby, at walking distance. “We got the most insane orders, replacing hills, dig away soil and construct rice fields. We never saw rice”, the labourers tell. These statements strengthen Schalkwijk and his group in their conviction.

From other quarters too, it is murmured that the place has a reputation for weirdness. Some visitors will later claim that they felt haunted by a strange, oppressive atmosphere when visiting the by now wooded area. Other tales recount how many times, in the past but also in the present, little people were seen who allegedly had an abode in the vicinity of the Mythstee. But that is not everything. A wealthy family buys an estate adjacent to The Round House and the Mythstee in the 1930’s. Some of its members behave very curiously and subsequently more rumours start that a ‘Germanic-Celtic cult’ practice its rituals at the Round House. When National Socialism emerges, eugenic experiments were conducted there as well. Mention is made of unholy orgies with certain very high placed German-friendly Dutchmen. There’s even mention of the ghostly appearances of four or five girls. They can be seen wandering over the nearby path sometimes at night, their arms tightly clutched.

The problem though is that the existence of a huge geoglyph in the form of Wodan remains unproven too. On the aerial photos that have been studied by enthousiasts and researchers of the myth, nothing is seen. Also, but a few traces remain of the original landscape projects of Frank Van Vloten, seen above in a family picture in the upper right corner. Are Schalkwijk and his group of fellow researchers deluded and do they simply want to see things that are not there at all? What certainly doesn’t give one confidence is that almost anything in the book on the case is unsourced. We don’t know who spoke to whom, when or how.

But the strange stories remain.

In regards to these weird tales about little men and unholy rites by a ‘German-Celtic cult’, these stem from an odd source as well. They appear in some curious leaves with intricate drawings, done by an elderly and deceased man by thename of Eldermans. Not much is known about him, what remained of his archive when Eldermans destroyed most of it towards the end of his life, is for the most part found in a museum for witchcraft. Eldermans himself is described by his late son-in-law with simply one word: ‘witch’.

Perhaps a closer examination of the purported shadowy group responsible for the occult activity during World War One might shed some much-needed light on the matter. It is perhaps here, in the various allegations of occult orders working on behalf of Imperial Germany, that we may be able to shed some light on the matter.