Creepy Woods: Unknown Beasts and Hauntings in the Forest

Many people think of the woods as a peaceful place to enjoy Mother Nature and get away from the stress of life. Others view the woods as a hostile environment brimming with vicious wildlife and unseen hazards in the brush. There are times, however, when even the most seasoned outdoors-man is afraid to enter the forest for fear of what he might find. Here are five disturbing tales of unknown entities said to stalk the woods. 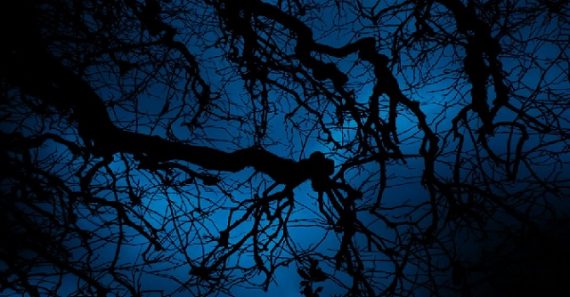 Unknown Beasts in the Forest

Many encounters suggest the presence of Big Foot or other large, mysterious creatures lurking in wooded areas. On SurvivalistBoards.com, a forum for avid outdoors-men, one hunter describes his experience with an unknown beast deep in the swamp.

The outing started like any other, but though the hunter normally felt at home in “the darkest, deepest” areas of the swamp, something about this area seemed off. He couldn’t shake the sensation of being watched, and the feeling left him with a growing sense of dread.

While sitting in a tree stand, the hunter heard a massive creature venturing across the swamp and towards a nearby thicket. At first, the hunter thought a group of wild hogs was responsible for the racket, but he soon realized a single creature was to blame. 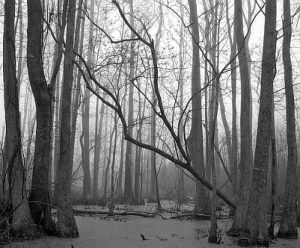 “Whatever it was, it was in no hurry and stayed out of sight,” he writes. “I had scouted the area and I knew the water the creature was in was waist deep on me. I could hear the ‘splash, drip…drip…drip…splash’ as it put one foot in front of the other, real slow, like it was trying to be quiet. I would never point a gun at a noise or anything I wasn’t planning to kill dead, but as that noise got louder I was looking down the barrel!”

The beast eventually charged into the thicket, silencing the frogs, insects, and even the chirping birds. The hunter never did see the massive creature, but when he returned a few days later to retrieve a forgotten bag, he discovered deep claw marks on the tree he’d been using for his stand. His bag was also gone.

The hunter’s tale is one of countless stories describing massive creatures in the woods, creatures that seem to be much larger than bears, cougars, or other known animals. Additional accounts on SurvivalistsBoard.com speak of huge foot prints, glowing eyes hovering several feet off the ground, and branches snapping under a heavy load. Did one or more of these experienced outdoors-men stumble across an as-yet-undiscovered beast?

Supernatural Creatures in the Woods

It seems mysterious, massive beasts aren’t the only frightening things in the forest. On the U.K.'s Anglers Forum, one fisherman describes his chilling experience in a wooded area of France. 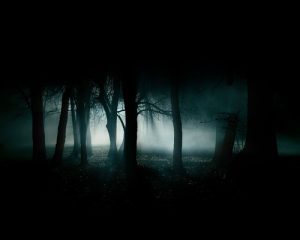 “During the late afternoons, I had the feeling of being watched from the woods at the far end of the lake,” he writes. “Each day, at the same time, the feeling would return, usually around dusk, and from different areas, as if whatever it was was getting closer.”

The angler camped near a château riddled with bullets from the Second World War. When he awoke the next morning, he got the shock of his life.

“I decided to make a brew, and as I flicked on the lighter the sparks silhouetted the face of a helmeted German soldier peering into my bivy from the darkness outside.”

The angler later discovered that the area around the woods had been the site of fierce fighting between American and German soldiers. The Germans fled into the woods but were ambushed by a reserve patrol and buried around the lake.

In some cases, the land seems to repeat past events. One man on SurvivalistsBoards.com camped near an old river dam and awoke to the sound of roaring water. When he crawled out from under his tarp, the sound abruptly stopped. However, the roaring resumed a few minutes later, this time accompanied by the sound of logs crashing and men screaming. The man and his dogs explored the area the next morning, but found nothing out of place.

“To this day I don’t know what that was but I have my ideas,” the camper writes. “I was told that the land remembers, and that’s fine, I just don’t need to be there when it’s remembering.”

A member of the Philippine Marine Corps also had a terrifying experience, this one in the jungle. One day, the man set out on patrol after his unit received reports of an enemy sighting. After three days of humping in the bush, the unit spotted a faint figure in the distance. As they drew closer, however, they saw that the figure wasn’t actually walking, but floating, though that wasn’t the worst thing about it.

“The figure was dressed like a normal living person but he had no face," the soldier writes. "The best I can describe it is as if the face was ‘erased.’ Its skin was very pale, as if drained of blood. It seemed to have bullet holes across its chest. At one point, it stopped gliding. I looked through my rifle scope and I had the fright of my life when I saw it looking back at me with its featureless face.”

Trail cams have also snapped a range of frightening pics over past few years, depicting everything from alien-like beings to figures from Native American folklore. However, skeptics believe the photos are hoaxes, either by the cam owners themselves or pranksters tampering with people’s equipment. 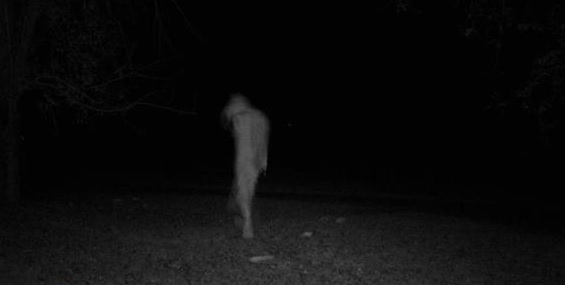 Are the world’s forests truly home to undiscovered beasts, rifts in time, or spirits from beyond the grave? Perhaps. The stories from hunters, hikers, and other outdoors-man seem to suggest something's going on out there.