A self-confessed "flying saucer junkie," Danielle was a woman I met a few years ago and who lived in the town of Aztec, New Mexico - the alleged site of a crashed UFO in March 1948. It's a controversial story that has as many believers as it does disbelievers. Danielle told me that living in a town with its own crashed UFO legend was "a dream." At least two or three times a month, no less, she would head out to Hart Canyon.

This is the impact point where the UFO allegedly came down, along with its crew of small, humanoid entities. Danielle would stroll around, “dig the ground up in case there’s anything still there,” and ponder upon that most controversial of all tales from the long-gone "Golden Age" of Ufology.

Aside from being distinctly moved every time she visited the alleged crash site where the legendary little men of Aztec were said to have been found back in March 1948, Danielle did not experience anything out of the ordinary. At least, not until 2004. On a particular day in May of that year she once again drove to the canyon and spent the afternoon sitting on the mesa, deep in thought again about the controversial tale.

Suddenly, from an area to the left of her, and flying at a height of “several hundred feet,” a small black helicopter, of all things, began to slowly close in. Black helicopters were, and still are, an integral part of the more paranoid and controversial fringes of ufological lore. According to many researchers they are piloted by elite groups of military personnel whose secret task it is to respond in quick time to sensitive UFO-related events, such as crashes.

Not only that: there were many reports of black and unmarked helicopters having been seen in the direct vicinity of cattle mutilations in New Mexico in the mid-to-late 1970s. Again, theories abounded that there was a link of a distinctly ufological kind. The helicopters, it was suggested, were connected to clandestine projects that monitored the nefarious activities of hostile extraterrestrials as they extracted bovine body-parts, organs and blood as part of some dark and diabolical alien agenda.

Danielle continued that as the helicopter got closer to Hart Canyon she could see a small calf suspended beneath it by a couple of ropes. This is getting very interesting, I thought: perhaps I was going to uncover prime evidence of some sort of dark and official link to the cattle mutilation controversy, after all. The story didn’t quite play out in the fashion that I anticipated, however. Do they ever?

As the helicopter got ever closer, Danielle somewhat reticently explained to me, she could see that it was, in actuality, nothing of the sort. Rather, the “helicopter” was a black-colored, and monstrously huge, flying insect of about eight to ten feet in length. What she first thought were the distant whirls of its rotor-blades, were in fact rapidly beating wings. And the calf was not hanging by “a couple of ropes” either. Rather, it was held in a vice-like grip by a pair of powerful-looking, black-colored limbs. 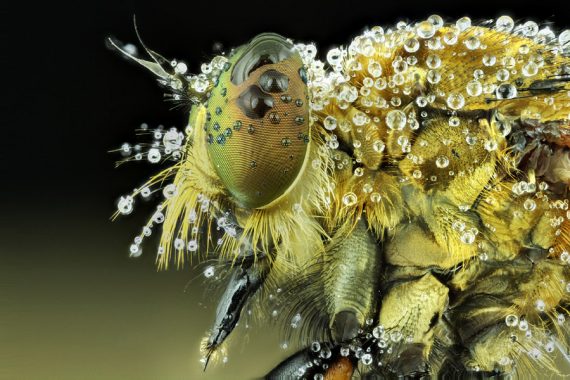 Outwardly, I eagerly nodded as Danielle related the story. Inwardly, I was groaning: giant insects kidnapping, mutilating and killing cattle? I half expected Danielle to tell me that, shortly afterwards, Godzilla himself came storming across the landscape and the two engaged in battle while summarily trashing the town of Aztec - Tokyo-style - in the process.

Yet, Danielle was so earnest that I sat back and listened to her controversial tale. As she continued to watch, appalled, horrified and terrified, the flying monster flew over Hart Canyon at “a really, really low” level and “came into land” atop an adjacent hill. But not before it dropped the calf’s body to the ground and presumably then indulged in a tasty feast.

Twenty minutes later, or thereabouts, the beast took to the skies again and was soon lost as it soared ever higher into the late afternoon skies over Aztec. And there was more, too. Danielle continued that she had come to the unique conclusion that the so-called UFO crash at Aztec in 1948 was nothing of the sort. Rather, she elaborated, the military had “shot down” one of these monster insects as it flew over the mesa. It was this, rather than anything extraterrestrial, she concluded, that the military had secretly retrieved from Hart Canyon.

“And what about the reports of alien bodies found at the scene?” I asked. Danielle had an immediate and ingenious answer: “I think they were probably its babies – gestating in an egg sac.”

Danielle’s theories were certainly novel and decidedly alternative. I had to wonder, however, if her tales, either consciously or unconsciously, were based upon pre-existing scenarios that bore an uncanny resemblance to hers? Them! was a 1954 black-and-white science fiction movie starring James Whitmore, James Arness and Joan Weldon that told the story of monstrous, Cadillac-sized, radioactive ants that lived deep under the deserts of New Mexico, and whose main activity seemed to be slaughtering the inhabitants of a small town near Alamogordo.

Maybe Them! was indeed Danielle's inspiration. Or, just maybe, it wasn't. Long before humankind was on the scene, some devilishly huge insects were roamed around the planet. For example, back in prehistoric times there lived a dragonfly known as Meganeura monyi. It had a wingspan in excess of three feet, and its territory extended from the United States to Canada and Scotland.

Precisely what it dined upon is still a matter of debate among scientists, as no fossilized examples of its mouth and jaw survive. But if a meat-eater, then a dragonfly with a wingspan of three-feet would be a formidable foe – even for a person, never mind a cow or calf.  Then, in 2001, geologists from Ohio State University found in an old mine at the location of Ohio State Routes 7 and 11, the ancient remains of nothing less than a five-foot-long centipede.

Moving on, and just a few years later, a fossilized, eight-foot-long sea scorpion – an arthropod, a group to which both spiders and insects belong - called Jaekelopterus rhenaniae was discovered in a German quarry. The creature, the scientific community concluded, would have been a formidable and vicious predator. Indeed, would you like to take on an eight-foot-long sea scorpion?

Was it possible that Danielle had indeed solved the animal mutilation mystery? Were such bizarre and grisly killings not the work of marauding extraterrestrials or government-sponsored bio-warfare experts, but large and predatory beasts presumed to have become extinct millions of years ago? I do not know. But I do know one thing: her story is such a fantastically entertaining and amazing one that I hope it really does have monstrous merit!

The Meta-Mappers: How You’re Being Watched Isn’t How You May Think