The Gray Man of Pawleys Island

As one of the oldest summer resort towns on the East Coast, Pawleys Island, SC is home to antebellum attractions, historic homes, and of course ghosts. However, the most famous legend in this tiny community is that of the Gray Man, a mysterious figure who warns of impending storms.

Five hurricanes have battered Pawleys Island over the past 200 years, including Hurricane Hazel in 1954 and Hurricane Hugo in 1989. If the stories are true, the Gray Man has appeared on Pawelys Island before each of the deadly storms. Strangely, people who see the man in gray not only survive the storm, but their property remains intact as well. Such was the case of Jim and Clara Moore who encountered the mysterious figure just two days before Hurricane Hugo roared ashore.

“We were talking a walk late in the afternoon which we usually do,” Jim said in an episode of Unsolved Mysteries (below). “You see so many people walking on the beach at this time of the day. That particular afternoon we only saw the one, and he was coming directly toward us. When I got within speaking distance, I raised my hand to say ‘hi’ or ‘beautiful evening’ or whatever, and he disappeared.”

Hurricane Hugo decimated Jim and Clara’s neighborhood, but the couple’s home suffered little damage. Clara attributes their good fortune to the Gray Man, and the Lord.

Though eyewitness accounts vary, most people describe the Gray Man as a figure dressed in all gray clothing. The man usually appears on the beach – either stepping out of the dunes or waving to boaters from the shore – before vanishing without saying a word. Most of the sightings occur in Pawleys Island, though the figure has been known to travel. One fisherman spotted the Gray Man in Murrells Inlet, a coastal town about 10 miles north of Pawleys Island.

“I had been out on my boat nearly the entire day and the sun was beginning to set,” the man said. “I was going to do one more sweep of the Inlet for oysters when I noticed a man standing alone on the shore, waving to me. As my boat drew closer to him, I realized he wasn’t waving at all. He had his hand out as if he was telling me to stop. He was dressed in all gray and looked like an old pirate. I couldn’t believe what I saw. I literally rubbed my eyes and looked again. He was gone.”

A few hours later, a powerful storm rolled ashore, pounding Murrells Inlet with heavy winds and lashing rain. The fisherman believes the Gray Man appeared to get him off the water and out of harm’s way.

Origins of the Gray Man

No one’s quite sure of the Gray Man’s origins, though there are plenty of dramatic tales. In one legend, a lovesick man set out across the marsh to visit his betrothed but died after falling in quicksand. Not long after the accident, the deceased man appeared to his lover on the beach and told her to leave the island immediately. The woman and her family fled town, and a deadly hurricane soon struck the coast. The family survived, as did their coastal plantation. Other legends identify the Gray Man as Blackbeard the pirate or a former resident who owned the home now known as the Pelican Inn. However, no one can say for sure. 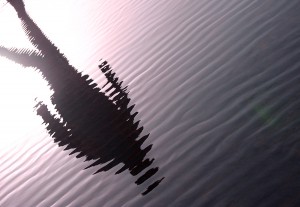 Hurricane Hugo was the last serious hurricane to strike Pawleys Island, but it certainly won’t be the last. Will the Gray Man return to spare another resident’s life and home or is he nothing more than a endearing legend? Only time will tell.