For almost as long as there have been motion pictures, there has been gossip and rumour about their production and their stars. In today's celebrity-obsessed, internet-ready world, most of these myths and scandals are verified or strenuously denied by PR people within hours of their inception - but not long ago, often the only way that these stories were spread was by word of mouth and movie urban legends were born.

Over the years many films have held the claim of being 'cursed'. In most cases these claims can be dismissed as simply bad luck or a series of coincidences.

'Atuk', an as-yet-unproduced comedy about an Inuit moving to the big city, is one example. Four comedians had shown interest or been cast as the lead character at various times throughout the 1980's and 90's: John Belushi, Sam Kinison, John Candy and Chris Farley.  Each would pass away either before, or very soon after production began rolling.

On the face of it, these circumstances seem unusual to say the least, but with the exception of Candy, each of these men had a reputation for drug abuse. Candy, Farley, and Belushi could all be considered to have been dangerously overweight. It's certainly not inexplicable then, that Belushi and Farley should die of drug overdoses and Candy of a heart attack. Of each of their sadly premature deaths only Kinison's (who died in a car accident when a drunk driver in a pickup truck collided with his Trans-Am on the way to a gig) cannot be attributed to their vices and lifestyle. 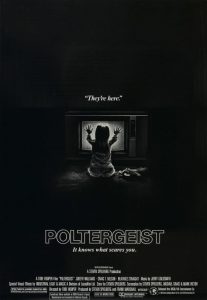 Of course, all of this ignores what is perhaps a more pressing question: if someone (or something) intended to put a curse upon a movie, why would they pick a fish-out-of-water comedy about an Eskimo? If we are to believe in a cursed movie, surely there has to be a motive, a cause for the dark forces to stand up and pay attention? Look no further than the 'Poltergeist' series. Perhaps the most notorious of all movie curses, it is also one of the most mysterious and difficult to dismiss.

The original 1982 film, directed by Tobe Hooper and produced by Steven Spielberg centres around the Freelings, a typical middle-class, California family who find themselves at the mercy of the strange titular phenomena when following a series of strange and violent incidents, their daughter Carol-Anne is taken away to 'The Other Side'. When a team of parapsychologists are called in and eventually rescue her, it is discovered that (in what has become something of a cliche over the years) the Freeling's home is located over a Native American burial ground. It was a box-office hit, and two sequels would follow in 1986 and 1988.

With it's central premise being that there are dark consequences for desecrating the dead, it was ironic in the extreme that JoBeth Williams (who played the mother, Diane Freeling) should inform VH1 in 2002 that during the first movie's well-remembered pool scene (and unspecified scenes in 'Poltergeist II'), real human skeletons were used as props. If there are dark forces out there who can be angered into cursing film productions, that ought to do it! 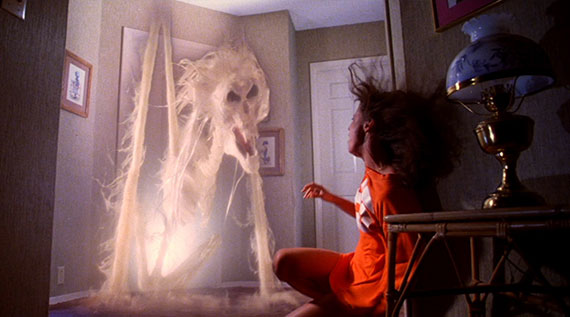 In the pre-internet days it was frequently claimed that all of the main cast had perished. Given that many of the actors not only are alive, but continue to appear in film and television, it's not surprising that this myth has dispelled. In truth, four cast deaths occured during and shortly after the filming of the series, two under far less unusual circumstances than the others.

Julian Beck, who chillingly portrayed the evil preacher Kane, died following an 18 month long battle with stomach cancer shortly after completing work on the second instalment. Will Sampson, who played Taylor the Native American Shaman in the same movie (and is perhaps best known for his role as the pretending deaf-mute in 'One Flew Over The Cuckoo's Nest'), passed away around a year after the film's release, after a heart-lung transplant that he knew he had little chance of surviving. 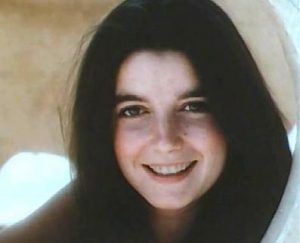 Sadly the fates of the actresses who played the two Freeling daughters were far from inevitable. Dominique Dunne, Dana Freeling in the original movie, fell into a coma and later died in November of 1982 at the age of 22. Her abusive ex-partner, Los Angeles sous-chef John Sweeney had arrived at her home to plead with her to take him back. Upon her refusal,  he began to choke her for several minutes and seeing her eventually fall unconscious, left her to die in her driveway. Remarkably, Sweeney would be acquitted of second-degree murder and instead charged with voluntary manslaughter with a 6 and a half year sentence.

The Freelings youngest daughter and the series' focal point, Carol-Anne was played in all three movies by Heather O'Rourke. She would pass away suddenly in February 1988, prior to the release of 'Poltergeist III', at just 12 years old.

In early 1987 Heather had been misdiagonsed as suffering from Crohn's disease and was prescribed cortisone (a side-effect of which was to make her face appear slightly bloated, explaining the noticeable difference in her appearance between the second and third films). On January 31st 1988 she became ill, with symptoms that were initially put down as a simple case of the flu. She collapsed the following day and then suffered a cardiac arrest while being taken to  hospital. After being airlifted to a large children's hospital in San Diego, she passed away during an operation on a bowel obstruction complicated by septic shock. A wrongful death lawsuit was later dismissed.

Whether any of these deaths can be put down to anything other than misfortune is a matter of opinion - though if a person does believe that they are punishment for the use of human remains in the movies, these vengeful spirits most certainly misdirected their anger at innocent parties who had nothing to do with the decision. 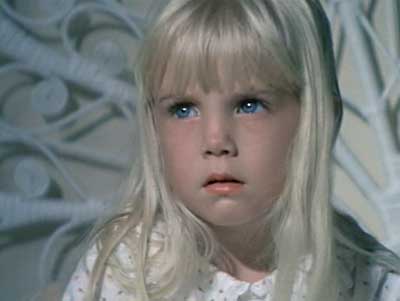 That the deaths of both of these young and promising actresses were tragic and unexpected, on the other hand, is undeniable. They have cast a long shadow over the Poltergeist franchise, and to this day it is rare that the movies are ever discussed without mention of the circumstances surrounding them. Watching young Carol-Anne in her supernatural peril is made all the more poignant by knowing how little time Heather O'Rourke would have on this earth. Indeed, the curse has lent the series an air of intrigue and a longevity that it otherwise may never have attained under its own merits. With a new Poltergeist movie currently in the works (recently revealed to be a sequel rather than a remake), it seems that the franchise - and the curse - will continue to be discussed for many years to come.

Side note: Craig T. Nelson (Stephen Freeling) found time for one more desecration a few years ago with this creepy and extraordinarily ill-judged commercial for DirecTV.

Eye of the Beholder: Religious Miracle or Myth & Pareidolia?