Okay, I might be just a little bit premature in announcing this, but what the heck. A few months isn't that long to wait, at all. Plus, by revealing the data now, and splashing the story on Mysterious Universe, I figured it might possibly generate new leads - and perhaps even prompt old eyewitnesses to come forward. You may very well ask: eyewitnesses to what? Nothing less than the 50th anniversary of a Mothman-style encounter that occurred in Kent, England.

But here's the very interesting thing: the encounter occurred several years before the eerie, shining-eyed beast of Point Pleasant, West Virginia was on anyone's radar. More intriguing is the fact that the description of the beast was eerily Mothman-like. The very same winged beast, but in a completely different part of the planet? Who knows? What I do know, however, is that in November of this year, the case in question will be celebrating its half a century. And, as far I'm concerned, it should not pass without comment or celebration!

For those reasons, I wanted to bring it to your attention right now, in the specific event that doing so may very possibly open new doors, and even re-open older ones, to what really went down on the night that a bunch of friends encountered something terrifying and monstrous. Neil Arnold, a well-known Kent-based cryptozoologist, researcher and author of many acclaimed books on mystery animals, has dug into the now-renowned event, which took place at Sandling Park, Hythe, Kent on November 16, 1963.

Neil's book, The Mystery Animals of the British Isles: Kent, includes the story of the Hythe Mothman, and it's an excellent book that I most definitely recommend to anyone and everyone with an interest in not just cryptozoology in general, but unknown winged things in particular. But what about the night in question? What was the story? Let's take a look at what we know. 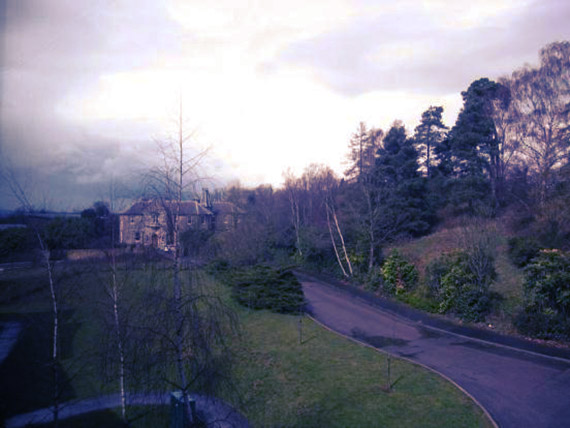 The area, known as Sandling Park, was certainly shrouded in overwhelming darkness at the time of the beastly event. But it was hardly the sort of place where one would expect to encounter nothing less than a fully fledged monster. Amazingly, however, that's what apparently happened.

John Flaxton, aged 17 on the night that all hell broke loose, was accompanied by three friends, including 18-year old Mervyn Hutchinson. As they walked along a lane running by the park - after returning from a local Friday night dance - the group of friends became aware of a bright object moving overhead, which they at first took to be nothing stranger than a star. How wrong they were.

The teenagers were amazed, and more than a bit scared, by the object's presence, as they watched it hover and then drop out of sight behind a group of trees. The boys decided to leave the area with haste, but the light soon loomed into view again. It hovered around ten feet from the ground, and at an approximate distance of two hundred feet, then once again went out of sight.

“It was a bright and gold oval”, one of the boys reported. “And when we moved, it moved. When we stopped, it stopped.” That was not necessarily a good sign!

Suddenly, the boys heard the snapping of twigs from a nearby thicket, and out from the wooded area shuffled a creature of horrendous appearance. “It was the size of a human,” reported Mervyn Hutchinson. “But it didn’t seem to have any head. There were wings on its back, like bat wings.” The group fled, perhaps understandably not wanting to hang around and see what developed next.

Matters didn't end there, however. Five night later, one Keith Croucher saw an unusual object float across a nearby football field. Forty-eight-hours after that, a John McGoldrick, accompanied by a friend, checked out the location and stumbled upon unusual impressions in the ground, which gave every indication that something solid and significant had landed there.

Neil Arnold has this to say about the matter: "Local UFO experts believed that the case was nothing more than a misinterpretation of natural phenomena, but Flaxton recalled: 'I felt cold all over.'"

Sounds familiar? Mothman fans may very well be nodding their heads in agreement by now!

And, as Neil Arnold also notes: "Three giant footprints were also found in the vicinity which were said to have measured two-feet long and nine inches across. On 11 December, various newspaper reporters accompanied McGoldrick to the area and found that the woods were illuminated by an eerie, glowing light. No-one investigated any further and the case faded as mysteriously as it had emerged."

To this date, the saga of the Mothman of Hythe, Kent remains precisely that: a mystery. Unless, that is, you're one of the original witnesses, reading these words, and still recalling those events of 50 years ago. If you are, then get in touch! Some of us would very much like to know what happened in Sandling Park, Hythe, Kent on the night of November 16, 1963. If any further details are available,  and additional light can be shed on the matter, the build up to the 50th anniversary would be an ideal time for the truth to finally come tumbling out.

Church Services for These Ancient Gods Could Be Your Last