That slasher villains have a unique place in the hearts of horror fans everywhere is beyond debate. No matter how despicable their actions or how high the body count, we often find ourselves rooting for them, gleefully watching them mete out their own sick version of justice. Seven years before Michael Myers first hunted Laurie Strode, (bringing the genre into the mainstream) and well over a decade before Freddy Krueger would first stalk the dreams of the Elm Street children, Vincent Price hit the big screen with one of his most flamboyant and brilliantly twisted characters - Dr Anton Phibes.

Set in the mid 1920s, 'The Abominable Dr. Phibes' establishes the character as an ingenious doctor and musician who is believed to have perished in a car crash. Phibes' wife Victoria, who was traveling with him, later died on the operating table. The viewer quickly learns what the police of Scotland Yard are only beginning to suspect when a series of grisly murders take place seemingly targeting the doctors present at Victoria's operation: Anton Phibes, though gruesomely disfigured, is still very much alive and out for revenge against those he believes were responsible for the death of his beloved. 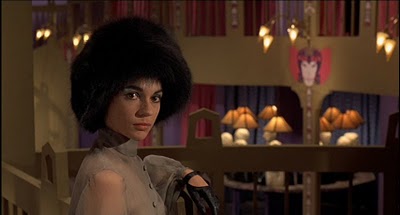 The premise of the film is simple enough and on the surface of it could be seen as interchangeable with any number of revenge pictures, but it is in its style, execution and eccentricities that 'The Abominable Dr. Phibes' distinguishes itself. The film is often noted for its bizarre art-deco inspired sets, particularly Phibes own abode, and the presence of an eerie robotic brass band, 'The Clockwork Wizards'. Also ever-present is Phibes' beautiful but silent assistant Vulnavia, played in the first movie by Virginia North.

Then of course, there's Doctor Phibes himself. Wearing a mask that it is a virtual reconstruction of his face prior to the accident that left him horribly disfigured, he speaks by literally connecting a wire from the side of his neck to various speakers and devices. Watching Vincent Price emote so grandly to a recording of his own voice while his lips remain unmoving is unusual yet given his penchant for speaking in almost Shakespearean monologues and soliloquys, oddly effective.

The death scenes are certainly some of the most unusual and elaborate to have appeared on screen up to that point. Inspired (for reasons that are never clearly explained) by the Ten Plagues of Egypt, bats, rats and locusts are among the creatures that figure in Phibes' plans for his unfortunate victims. Perhaps most memorably, a surgeon, Dr Hargreaves has his head slowly crushed by a specially constructed mechanical frog mask at a masquerade ball - a roundabout way of fulfilling the amphibian quota. 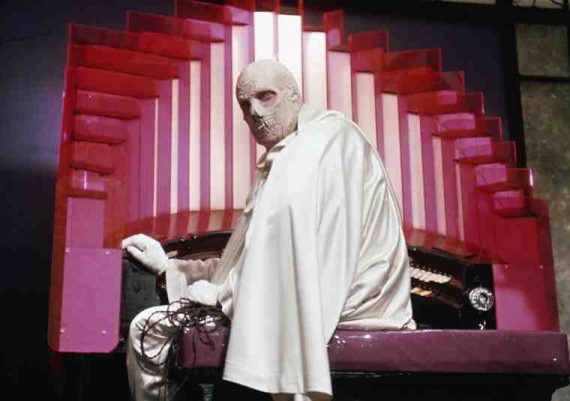 Another element that seems to often go overlooked but is in my opinion key to what makes both Phibes films so enjoyable are the scenes with the police officers, particularly Inspector Harry Trout, played by prolific English film and TV actor Peter Jeffrey. While the scenes with Price are largely played straight (particularly the speeches in which Phibes talks to his dead wife and promises that they shall be soon reunited), the investigation scenes are largely played for laughs. The dry humor, double-entendres and bumbling ineptitude of Trout and his superiors hits the mark with impressive regularity. It was a bold and successful move on the part of scriptwriters William Goldstein and James Whiton, thanks in no small part to the subtle direction of Robert Fuest, and one that seems highly influential on the horror movies of the following two decades, giving the viewer respite from the tension and horror and turning the whole film into a macabre Grand Guignol experience.

The movies' closing scenes, in which a Doctor Vesalius must rescue his son by removing a key implanted close to his heart while a container of acid is timed to slowly release above their heads is a fittingly nail-biting climax and a clear influence on the Saw series.
A sequel, 'Dr. Phibes Rises Again' was released the following year. Although generally not as well regarded as its predecessor, its still a highly entertaining excursion, following Phibes and Vulnavia (this time played by Australian model Valli Kemp, as Virginia North was pregnant at the time of filming) to Egypt in search of the River of Life, in which Victoria may be resurrected. Discovering that his house has been raided and his maps to locating the river have been stolen, Phibes once again begins a bloody vendetta seeking out the thieves who wish to steal immortality for themselves. 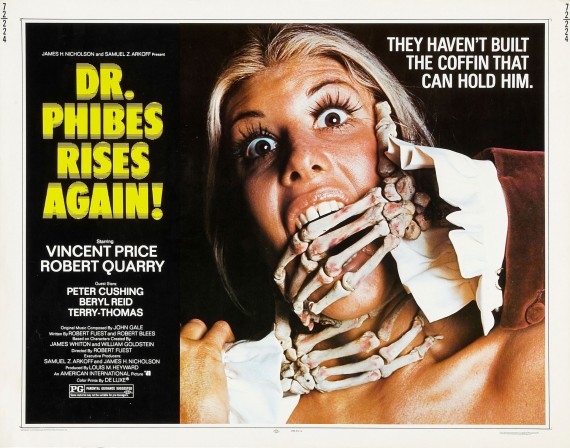 The murders this time, while still memorable have a looser theme simply being related to Egypt in general. The change of setting is welcome and gives a suitably grand location for the frequently over the top performances, and the humor - courtesy of the returning Inspectors - remains as sharp as ever. The climax, taking place in the River of Life is even stranger than that of the first film, closing with Phibes singing 'Over the Rainbow' as the credits roll.

Though not as well known as some of Vincent Price's other classic horror flicks, both Phibes movies remain must-see cult classics for any fans of the deliciously dark and sinister. Several more sequels including 'Dr. Phibes In The Holy Land', 'The Son Of Dr. Phibes' and 'Phibes Resurrectus' were planned or scripted over the years, though sadly none emerged. This is particularly disappointing since Vincent Price frequently spoke in interviews of how fond he was of the character and how eager he would be to reprise him.  Fans can take comfort however - original creator William Goldstein has returned to the character in a number of recently published ebooks, while the first film is due for a long overdue Blu-Ray release as part of Scream Factory's Vincent Price box set later this year. You can't keep a good man down.

Conspiracies and Secret Societies: Why So Appealing?