Spooky stories abound about spirits in gloomy castles and crumbling, old mansions, but tales of underwater ghosts are far less common. However, they do exist. Here are five true tales from real-life scuba divers.

Paranormal investigators are a dime a dozen, but Florida’s Paranormal Divers aren’t your typical ghost hunters. The world’s first underwater paranormal investigation team has searched for spirits in just about every type of water there is and have had a few eerie experiences along the way.

In one expedition, the Paranormal Divers spotted “a weird unexplained light phenomenon” in the water under Tampa’s Sunshine Skyway Bridge. The original Skyway collapsed in 1980, sending 35 motorists plunging to their death. The bridge is also a popular site for suicides. Over 200 people have jumped to their death since the new span’s construction in 1987, and one man was forced to leap at gunpoint. Could these deaths have something to do with the strange lights?

In another expedition, the Paranormal Divers snapped what they call the world’s first underwater ghost photo (below). Taken in a flooded underground cavern at 130 feet, the photo reportedly shows a diver’s face mask floating in murky water. A member of the team snapped the pic after hearing screams coming from the bottom of the cavern.

“We panned deeply and shot the black water and the sound of the screaming voice which was the exact site of a diver death,” reads a report on ParanormalDivers.com. “This is the real thing. To our knowledge, it’s the first underwater ghost photo ever taken.”

The Ghost Machines of Truk Lagoon

Situated halfway between the Philippines and Hawaii, Truk Lagoon was the site of a major battle between the U.S. and Japan in 1944. Around 60 ships and 275 planes sank beneath the waves during a U.S. attack known as Operation Hailstone, and thousands of men went along with them. Human remains litter many of the 69-year-old shipwrecks, but it’s the machines that appear to live on.

Japan’s Hoki Maru ship went down with a cargo full of trucks. Now, divers reportedly hear the sound of engines turning over and starting up, even when there are no boats on the surface. Strange reports also come from the Fuji Kawamaru where grinding noises eminate from the ship’s engine room.

The crew of Destination Truth explored the underwater ruins of Truk Lagoon, and was perplexed to hear an engine idling underwater. They also recorded something that sounded like a human voice, as well as human-like heat signature. 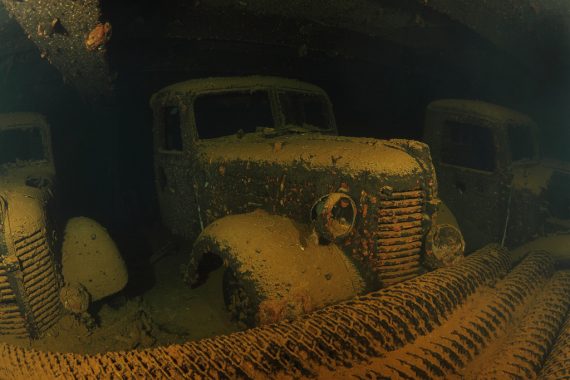 A common theme in underwater ghost tales is that of the disappearing diver. Several reports speak of men and women who appear in the water and then disappear without a trace.

Last year, scuba instructors in Santa Rosa, CA reportedly saw a diver with a pink tank floating near the bottom of a local blue hole. When they got closer, however, the diver disappeared. The instructors reported the strange event to police only to learn that they weren’t the first people to encounter the mysterious figure at the bottom of the hole.

A similar account appeared in the Toronto Sun in 2007. After an eventful afternoon exploring the waters around Grenada, a group of divers returned to their live-aboard ship to compare notes. One man asked the rest of the group if they’d seen the diver in the white shirt. The other divers thought he was kidding, but the man insisted he’d seen someone.

“He was wearing a white T-shirt, and a scuba tank. He waved at me!”

The ship’s crew immediately took a head count, but no one was missing and there were no other boats in sight. They never did solve the mystery of the man in white. A hallucination, perhaps? 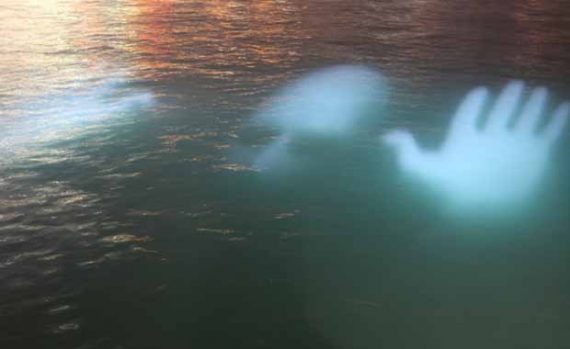 However, not all ghostly divers disappear. A diver on the forum scubaboard.com shared this odd story:

“One of my friends dived a wreck the day after his friend’s funeral,” the man writes. “He went down the line and saw his friend slowly waving to him from the deck of the ship. He ascended for a bit then went back down and the guy was still there waving at him so he abandoned the dive. He was that freaked out.”

Do ghosts truly haunt underwater caverns and decades-old shipwrecks? I'm sure not strapping on a scuba tank to find out!

Of Mice, Men and Mind Control