The building was quiet. Wells Hall, built in 1938, is home to Northwest Missouri State University’s Department of Communication and Mass Media, and two radio stations. During the school year, students work on projects, or at the campus media, at all hours. However, on Sundays in June, the building is empty; at least of the living.

College senior Victoria Bailey sat in the studio of KXCV radio around 8 a.m. on Sunday 9 June when she realized she might not be alone. “I was putting together news stories, and I saw something pass by the observation window,” she said. “It was out of the corner of my eye. I turned around really quick to see if I could catch who it was and nothing was there.” 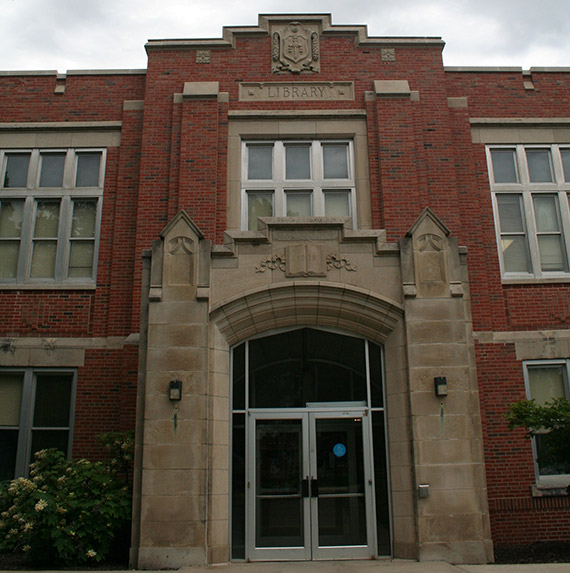 She got up and walked into the long hallway the person would have had to go down, but she was alone. “Nobody is here on Sundays,” she said. “Not even janitors.”

Victoria brushed off what she thought she saw and went back to work. At a break, she went into the hallway to get a drink of water. “I thought I saw somebody in the hallway through a glass door,” she said. “I looked up after I got my drink and nobody was there.” She considered she may have seen her relief coming in early for his shift, but quickly dismissed it. “At that point I’m creeped out a little bit,” she said. The creepy feeling would only escalate. “About 15 minutes goes by and I go use the bathroom, and get another drink.”

When she came back to the studio door, she looked through a small glass panel and saw something that froze her. A man she didn’t recognize stood outside the observation glass opposite her, looking into the studio. “There’s a person standing on the other side just staring at the computer equipment,” she said. “I don’t know how I can duplicate my scream.”

The man looked to be a college student, “Asian. Dark hair,” Bailey said. “He was wearing khakis and a blue shirt. It was creepy.”

Although Bailey had heard rumors Wells Hall was haunted, she’d never heard details, until she posted her encounter on Facebook. Then she got a name and a date: Amos Wong, 1991. Walking with some trepidation into the hallway to a bookshelf containing decades of Tower yearbooks, she pulled out the 1991 yearbook and flipped to the index. “I felt he was looking at it with me,” Bailey said. “I was flipping pages, looking up his name. I felt someone was with me.”

Then she found him, Amos Wong, a photographer for Tower yearbook. The face in the group picture staring up at her was he face she’d just seen through the window of the radio studio. “It creeped me out,” she said. “It was really weird.”

Dominic Genetti, a former reporter for the student newspaper The Northwest Missourian, saw Amos in 2008. “I turned and looked out the corner of my eye and I could have sworn I saw somebody in a button-down blue shirt,” he said. “Not a royal blue, just blue. And I couldn’t really get the body type out of it, but it was definitely a person I saw walk by.”

When Genetti looked, expecting someone to turn the corner toward him, no one did. “I walked into the hallway and there’s no one in the basement,” he said. “There were times in the Convergence Lab that the light above me will flicker. There will be a reflection in the Mac computer that looked like someone walked behind me. And I looked behind me and no one was there.” Before digital cameras, the room known as the Convergence Lab was the darkroom. 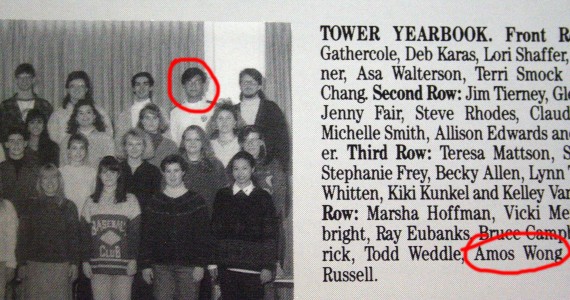 Amos Wong died in a 1991 car accident. Assistant Professor Laura Widmer, former student publication adviser at Northwest Missouri State, said Wong had a passion for photography.  “He was just on staff for a year,” Widmer said. “He was an international student that enjoyed photography and joined the yearbook staff. He was a go-lucky kind of guy. Wouldn’t hurt anyone. Just a little mischievousness in his eye.”

In fall 1991 after Wong’s death, students working at the school’s media outlets started noticing something strange in the basement.  A student who had worked on staff with Wong told Widmer, “‘You know, Amos is back in the darkroom,’” Widmer said. “I’m not sure he ever saw Amos, but there are things like music going on and lights going on. Just strange occurrences. Photographers would say there was someone in the darkroom with them. It just felt like someone.”

Bailey agrees. She sometimes feels uncomfortable coming to work when the building’s supposedly empty because she knows what she saw. “Was it a ghost?” she asked. “I’ll answer my own question. Yes. You hear stories about Wells Hall being haunted – it is.”