What constitutes a paranormal experience?

Sometimes I feel like the only person who doesn’t believe he’s seen a ghost. Nearly everyone I know has told me at least one story about a spooky event where they’ve seen something they cannot explain without resorting to the “G” word. That’s not to say I too haven’t had a few experiences I’ve found to be odd. I have. I’m just not willing to say without a doubt these events are of paranormal significance, but I’m also not able to entirely rule it out. What I am willing to do is consider your input, because if there is a blog audience online who is well-versed in the paranormal, it’s the Mysterious Universe audience. Here is one of my experiences that stand out as being odd.

A friend of mine had just recently gotten into actively looking into the paranormal, and he invited me to get involved with his adventures. I knew a little bit about ghosts at the time, but most of what I knew was slightly out-dated as it was information I picked up from books in the darkest corner of my local public library. These books were already old when I discovered the subject cards in the card catalog. And we’re talking about a real card catalog here, with paper and everything. We’re talking really old here.
To get caught up on things I picked up a book on Amazon called How to Hunt Ghosts: A Practical Guide by Joshua P. Warren. The book had been published just a few years before in 2003, and the content seemed to be well-researched and presented in a way that even I could understand it.

I studied up and soon after I went on my first ghost-hunting trip.

I was more of a tag-along than a real ghost hunter. I just wanted to get out of the house and do something different. My expectations of encountering a ghost were about as high as my expectations of seeing the lotto-ball machine spit out the numbers on my ticket in a multi-million-dollar lotto drawing.

The first trip out was uneventful.

We spent the night at one of those pay-at-the-door, “haunted” buildings of local historic significance, the former West Virginia State Penitentiary at Moundsville. Since our visit, the prison has appeared on several of the ghost shows on television, but at the time of our visit the interest in ghosts and ghost hunting was just starting to creep into the mainstream.

We were armed with the usual gear. We had one of those devices that detects electrical energy, a pair of digital cameras, digital recorders, and even a microphone for one of the recorders.

After seven or eight hours of roaming around the cell blocks, the gym, cafeteria, the now infamous Sugar Shack, the spot frequently cited as having high levels of activity, and the building’s underbelly, we got nothing. We didn’t see anything, we didn’t hear anything, and we never felt any kind of presence. I did have a general feeling of unease throughout the evening, but that was strictly due to my claustrophobia and fear of getting locked in one of the cells.

It was a disappointment to say the least, however, it didn’t dissuade our efforts to continue seeking out paranormal activity.

A few weeks later, we decided to spend some late-night hours at the oldest cemetery in our home town. This idea wasn’t something we just dreamed up and pursued. Internet searches about nearby haunted locations always had this particular cemetery on the list. The stories ranged from apparitions, to mysterious fire, and even floating objects that glow.

We packed up the same gear from before, climbed into my car, and made the trip to the cemetery. The gates were open, so we drove right in and parked near a burial vault at the crest of a hillside of graves. To clarify, it wasn’t a rude place to park. The spot seemed to be built for that very purpose.

We spent the next few hours roaming around, smoking cigars, playing with the equipment, and generally looking suspicious. It probably wasn’t the best protocol for ghost hunting, but that’s how things went down that night. At least that’s how it went down until we got cold and bored.

We trudged our way back up the hillside to the vault and the car, stopping occasionally to mutually wheeze together and complain about our cold feet.

I turned the key and initiated the orchestra of electricity and fire needed to get the 6-cylinder engine humming. I clicked on the heater and then turned my attention to finding something good on my iPod. As I was browsing somewhere between The Beastie Boys and Buckcherry I realized there was no air blowing.

I started fiddling with the knobs trying to get the heater to engage, but it refused to even offer up a dying breath. It was already dead.

I tried everything, including restarting the car, in hopes of getting the heater to kick on, but it never would.

We both cussed profusely at first, then my friend began to find his jollies by insulting my American-made car. I eventually gave up and just started making my way out of the cemetery.

Within a few minutes, we’ll say five, we were driving through the cemetery gates and onto the narrow, winding road that leads to it. When we were less than a mile away, the heater kicked on and blasted us in the face with a rush of warm air. 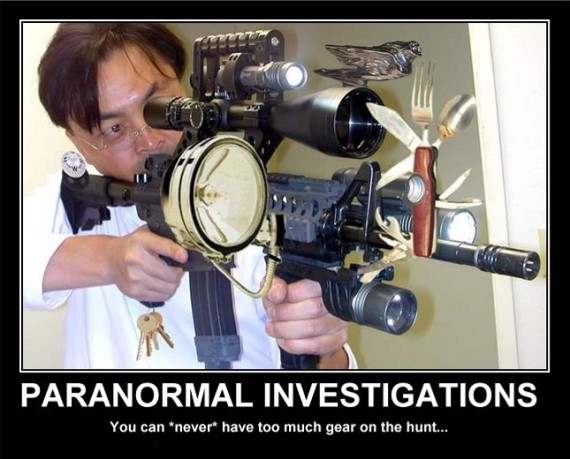 So herein lies my question about whether this could have possibly been an experience with something paranormal versus a simple mechanical failure. This was a problem I’d never had before with my car, and it was a problem I never had again over the next three years I owned it. So with this being a one-time-only happening, that just happened to happen during a late-night, cemetery ghost hunt, is it possible this was more than just a run-of-the-mill mechanical anomaly?

I find it odd that I never had another problem with the car’s heating or air conditioning unit, and it would be at least another year or two before I experienced any other electrical issue with the car. Even then, the electrical issue was just the typical, high-mileage failure of the alternator.

When I’m in the company of others telling their experiences with the paranormal, I never volunteer this information as being a paranormal experience of my own. I still contend I’ve never had such an experience, but there is a part of me that wants to lean that way because I have no other explanation for the cemetery incident.

Some of the research I’ve done does indicate ghosts have the ability to interfere with electronics due to their electromagnetic makeup. Could this be an answer to my temporarily malfunctioning heater? Have I experienced a paranormal encounter? Or am I still the odd-man out among my friends who nearly all claim to have had experiences with the other side?

What do you think? Is this a common ghostly encounter, or just an American-made car acting quirky on a cool, 40º F, night?