Footprints of the Gods: Proof of “Giants?”

A recent video appearing online that features Michael Tellinger, author of books like African Temples of the Annunaki, shows the author as he leads a hike up to a hillside where the apparent presence of a huge footprint exists. Indeed, the impression left in stone that is displayed in the video is quite impressive, and perhaps even anomalous in nature; according to some, it has been touted as evidence of beings of tremendous stature that once existed long ago.

Thus, as the video has gained attention on the web, it has also somewhat renewed the existing controversy over the debate about "giants" which some believe may have roamed the Earth in ancient times. The footage is indeed compelling (to see it, click here), and the impression visible in the rock certainly does look very much like a human foot, right down to the five toes that are visible. Tellinger explains that the discovery exists near the Swaziland border in South Africa's northeastern corner, and has apparently been preserved "in rough granite," which geologists estimate to be between 2 billion and 3 billion years old. 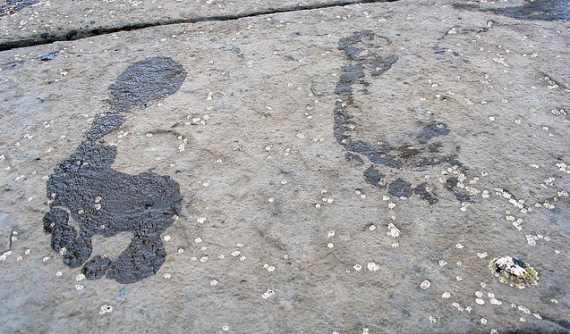 "I don't know of any example of a footprint in rock that is as amazing as this," Tellinger says, noting that there should be tourists visiting the site each year by the thousands to see this amazing impression. While certainly intriguing, is this discovery the final proof of "giants" that exists in South Africa, and does it show us that there are indeed instances where humans of extremely large stature might have existed in the past? Or could there be other explanations?

There are a few problems with the assertion that this discovery is indeed a giant footprint, which perhaps future scientific study could help clear up. For one, it might be interesting for geologists to test the composition of the rock which Tellinger describes as being rough granite, since granite, being a form of igneous rock, forms from magma, not mud or sand. While Tellinger is correct in assuming (based on similar past discoveries) that ancient human footprints have been discovered in stone that hardened from soft mud, this would only be the case here if the stone in question were a shale formation, rather than solid granite. For the latter to hold true, our presumed giant would likely have had to thrust his bare foot into magma as it cooled, rather than mud, as Tellinger describes.

Based on this, there are a few possibilities as to what we're actually seeing in Tellinger's video:

In the latter of these three possibilities, what we would actually be seeing might be considered a form of rock art; specifically, it would be classified as a petroglyph. It is interesting to note that similar petroglyphs exist here in the Americas, where human and animal footprints have been catalogued by ancient indigenous cultures.

One example in Yancey County, North Carolina, is called Gardner Rock, which is an ancient Cherokee petroglyph site covered in impressions made to resemble black bear and deer spoor (see above, courtesy of U.S. Forest Service). While this site doesn't include impressions that resemble human footprints, many locations throughout the Carolinas actually do, as pictured in anthropologist James Mooney's classic book Myths of the Cherokee.

Another interesting site in Western North Carolina is Judaculla Rock, near the town of Cullowhee. In the photo to the right, I was surprised earlier this summer during a visit to the location to see that the ancient and mysterious rock had been excavated, as part of an ongoing cultural heritage and preservation project (portions that had previously existed underground can be seen in the brighter colored areas in the photo). Among the petroglyphs is a large impression with solid carved lines emerging from it, which is often referred to as "the hand of Judaculla." According to legend, Tsulkau, the Cherokee god of the hunt, had leapt from the summit of a nearby mountain and landed at the spot, and as he hit the ground, he steadied himself against the stone, where his six-fingered handprint left an impression. Tsulkalu was the Cherokee derivative that was later bastardized to form the westernized "Judaculla", but each refer to the Cherokee god of the hunt. 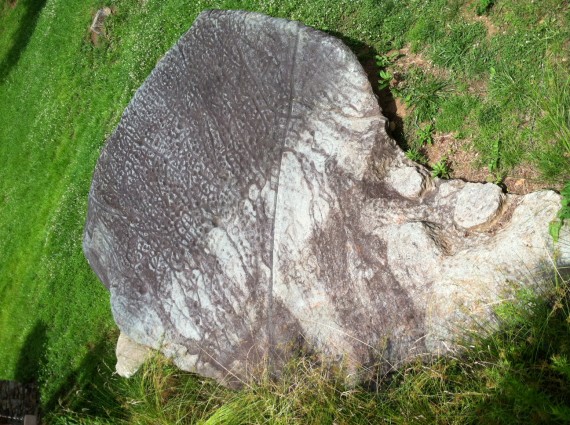 In an interesting parallel to Tellinger's "Footprint of God," Judaculla's handprint is also very large, as it was believed that Judaculla (Tsulkalu) had been an enormous giant humanoid just as well, bearing the peculiar feature of slanted eyes. Similar characters from Cherokee mythology are documented in one other Cherokee legend documented by anthropologist James Mooney, which told of giants that traveled from the West, and came to stay with the Cherokee at some point long before the arrival of Western settlers.

In addition to the presence of similar "homages" to mythological giants in petroglyphs elsewhere around the world, there is the obvious problem we would encounter with trying to account for how such a giant, as described by Tellinger, would be able to move about. Some of the largest known hominids to have existed in South Africa at any time had included Heidelberg Man, which, in cases specific to South Africa, had actually gone through a period of gigantism where it had been an apparent norm for heights to exceed seven feet. Still, modern humans that have exceeded 8 or 9 feet in height, while very tall by contemporary standards, also have great difficulty moving about. Proportional to physical size is the burden of carrying the weight one has attained, in relation to the natural forces of gravity exhibited against such large individuals, or any such life form originating on Earth. Within the last several million years, it seems unlikely that gravity would have been exerted differently from how it is now, and thus more conducive to humanoid forms capable of much larger size.

Hence, one might argue that this is the reason why known hominds in the anthropological record of planet Earth are generally limited in potential stature. Ancient human ancestors might indeed have been small at times (such as the now famous Homo floresiensis), or in a few cases, even exceptionally large like the "giant" Heidelberg specimens of South Africa. Some cases might still present hominids that were perhaps even larger, though; one notable example of a really large ape creature that could have existed in ancient times is the Gigantopithecus of the orient, which, based on the few jawbone fragments that have been discovered, has drawn controversy over whether the creature might have walked upright; if this we the case, our Giganto, standing erect, might have stood taller than 9 feet at times. Still, even these "giants" of our ancient world would have been dwarfed by a creature the likes of that which left Tellinger's footprint... a creature of such massive proportion that, if it had in fact had a humanoid shape, would likely have buckled under its own massive weight and become immobile, had it evolved to boast such a size in the first place.

Altogether, it seems unlikely that the "Footprint of God" is really a footprint at all. If it is a natural formation of some kind, it would seem extraordinary that nature could produce something so life-like (pareidolia, perhaps?). Alternatively, as outlined above, the other potential is that this strange find might also be a petroglyph, in which case further scientific study might reveal the signs of stones and other tools used in the process of its creation. While perhaps a bonafide ancient mystery, the evidence may not quite point to the proof of "giants" in our past that so many continue to search for.