Much like the woods, the sea is a place people visit to revel in the beauty of nature and get away from the hassles of life. Of course, the ocean can also be deadly, and if the stories below are true, violent storms and vicious predators aren’t the only dangers sailors encounter. Here are six creepy tales from real-life boaters.

When a boater is miles from land with nothing but waves ahead and stars above, it’s easy to spot anomalies in the sky. On CruisersForum.com, a site for sailing enthusiasts, one man relates his bizarre experience with mysterious lights off the coast of France.

The incident happened in 1986 on an overnight trip between Cherbourg, France and England’s Isle of Wight. It all started with a sighting of three triangular lights hovering high in the night sky.

“I called my girlfriend to come and look,” the man writes. “As we watched, they performed some almost instantaneous maneuvers across the sky. Awhile later, after she'd got her head down and I was alone, the lights of Cherbourg slipped below the horizon, and I could see the loom of St. Catherine’s light ahead.”

Everything seemed in order, but the man soon noticed a searchlight beaming down from above. Baffled, he wondered if a local military team was performing anti-submarine exercises. Strangely, the craft shining the light made no sound. There was no familiar throb of a helicopter engine, just a blinding beam of light that drew closer by the minute. The beam eventually illuminated the small boat, and that’s when things got weird. 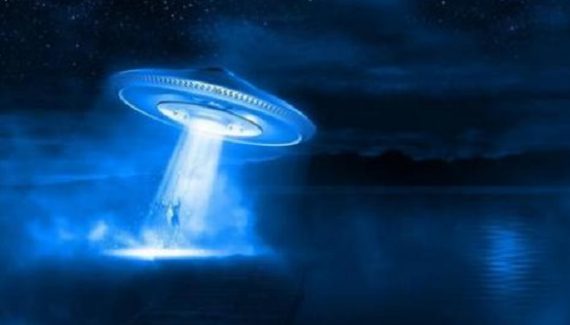 “The next thing I knew the tiller was banging against my head,” the man recalls. “Thinking I'd fallen asleep, I sat up fast and looked forward to check all was well. Unbelievably, sitting on the boom and leaning against the belly of the sail, was a little figure with enormous eyes watching me and laughing. Thinking I was still asleep and dreaming I shook my head, rubbed my eyes and, when I looked up again he was gone.”

Assuming the figure was nothing more than a dream or hallucination, the man got up to check the boat’s position. He was astonished to see the lights of Cherbourg twinkling on the horizon, the same lights that had sunk below the horizon two hours before the triangular lights had appeared.

“A look at my watch showed an hour had passed since the last time I'd checked. No way could my little 24-footer have covered the distance involved. Have I an explanation? NO. Did it really happen? YES. Was there really a little person on the boat? I DON'T KNOW. But I do know I'm no longer a skeptic about UFOs.” 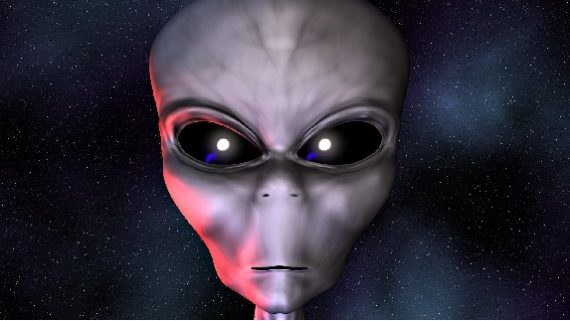 Another Cruisers Forum member also encountered a mysterious light while out at sea. The man was anchored at Culebrita, north of Culebra in the Spanish Virgin Islands, when he noticed a bright light emerging from the water. At first, the man thought it was the moon rising from the horizon, but he quickly realized the moon was already in the sky.

“Whatever it was looked like a giant glowing harvest moon, but rose rapidly up to the around aircraft height, and then went off fast at a right angle parallel to the horizon,” he reports. “Three of us saw it and have no explanation. My best guess is that it was some sort of military operation, as that area does have charted naval operation zones. Still, I have seen ordinary helicopters and such at night, and this certainly didn't look like that.” 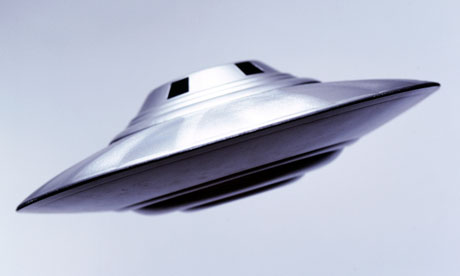 It seems the sky isn’t the only place to spot mysterious lights at sea. A woman on Cruisers Forum saw submerged, glowing orbs in the Gulf of Mexico. She writes:

“At about midnight, I passed a big 25 foot glowing ball. It was about 20 feet down and about 15 feet away from the boat. At first, I thought it was a sleeping whale but I realized whales are not perfectly round.”

The woman thought the balls were strange, but didn’t give them much thought. However, she saw another ball about 15 minutes later. It was smaller than the others, but seemed much deeper. The balls emitted a surprisingly strong glow with some being visible a half a mile away or more.

“The glow was the same glow you see with phosphorescence,” the woman recalls. “But it was as bright as a light bulb (kinda like a greenish light bulb with freckles of dimmer spots), and it didn't change brightness or pulse as you would see with a bioluminescence when disturbed.”

The woman never determined what she saw that night, though she never forgot the mysterious orbs. Other boaters on the forum encountered similar USOs (unidentified submerged object). 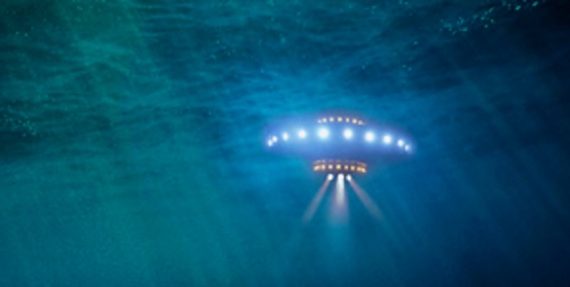 Bubbles That Go Pop in the Night

A boater from SailNet.com encountered a different sort of underwater mystery.

While enjoying a fun, yet rainy, vacation, the man anchored at Maryland’s Dividing Creek on the Wye. However, huge bubbles kept bursting against the hull, disturbing the man and his companions and keeping them from getting a good night’s rest.

“These were bubbles loud enough to wake me up, and I am not a light sleeper,” he writes. “Along with the popping bubbles, there were sounds like sticks hitting our hull. At one point, I did go up on the cockpit, and the other two boats had not dragged, nor had we.”

The next morning, the man rowed over to another vessel and asked the occupants if they had heard the popping sounds. They hadn’t and joked that aliens were to blame. Later that day, the man witnessed a bubble the size of a basketball break the surface and burst with a loud pop. He wasn’t sure what to make of the sight or what the water did to his anchor.

“Dividing Creek is lined with large deciduous trees, and I am sure there are loads of leaves and branches and probably whole trees rotting down below, but this was a new one,” he reflects. “The bubbles were only evident at night. Also, it should be noted that the anchor chain was stained black! A few more nights at anchor and it is still black. Does anyone know what kind of spooky channel we visited?” 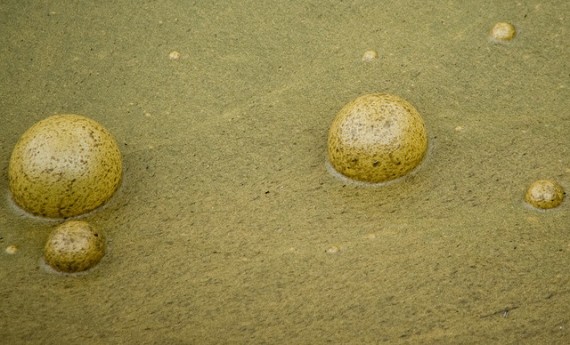 A Presence at Egmont Key

As if UFOs and underwater mysteries aren’t enough, some tales suggest restless spirits also haunt the sea. On Cruisers Forum, one sailing enthusiast describes his brush with the paranormal at Egmont Key, a scenic island at the mouth of Florida’s Tampa Bay.

“We've had several bad occurrences at Egmont Key,” he writes. “The freakiest was during a storm in the 80’s. The radio turned on by itself at top volume with a song screaming. "DO YOU WANT TO DIE" over and over and wouldn't shut off till the fuse was pulled.”
The man and his companions weren’t the only people to encounter a frightening presence near Egmont. A pastor staying at a local marina related a chilling tale about a crying baby with a nasty sense of humor.

“He told us he woke up to a baby crying,” the sailor relates. “The seas kicked up suddenly, and then a cabinet came open and gashed his head, at which time the crying turned to laughing. He told us this story with a somber almost frightened demeanor.” 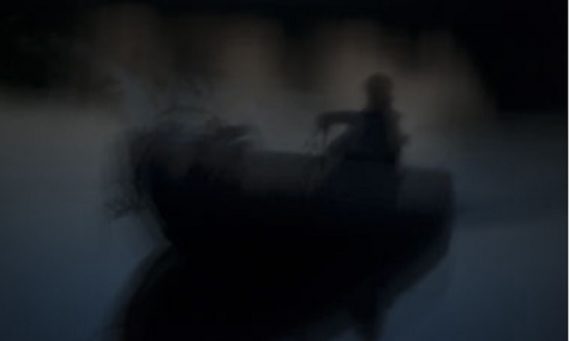 Voices in the Night

When miles from the nearest shore, boaters hardly expect to hear voices on the water. However, that's exactly what one group yachters heard off the coast of Mozambique.

“After a couple of days at sea, crew members from two separate boats were discussing our trip. One person mentioned hearing voices - two people taking to each other,” a boater writes. “The hairs on the back of my neck stood up. I had a similar experience the same night over the same area on the other yacht. My ‘voices’ were two kids laughing and playing.”

The boaters were sailing off the coast of Mozambique, near the site of several wrecks. Could the accidents have something to do with the mysterious voices? Or were the sailors merely experiencing a form of auditory pareidolia? 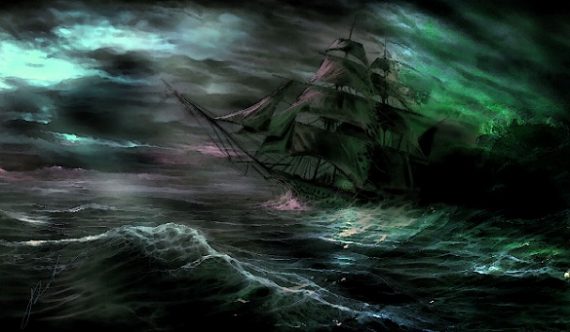 Do boaters truly encounter ghosts, UFOs, and evidence of mysterious beasts while out at sea? Tales of haunted ships and mysterious beasts are nothing new, with some even claiming ghosts lurk underwater. The legend of the Bermuda Triangle, and others like it, also suggest the sea is home to strange phenomenon. What do you believe?