From the numerous plants with hallucinatory effects, a sun producing heat powerful enough to induce visions in those overexposed to it, to the eerie glow of the great Northern Lights, nature can mess with our minds. One of nature’s visual jokes on its skyward-looking humans is that of a somewhat rare cloud formation that often resembles a UFO called lenticular clouds. When one of these lenticular cloud formations appears near a large population of people, it is almost certain someone will report seeing crafts from outer space. With that in mind, I’ve put this short piece together as an FYI for newbie sky-gazers in hopes of preventing false reports and potential public ridicule.

Lenticular clouds are masses of swirling, yet stationary, layers of dense clouds that sometimes sit in one place in the sky for hours as other clouds roll by as usual. These clouds often even take the shape of saucers or other popular space craft descriptions reported at sightings. 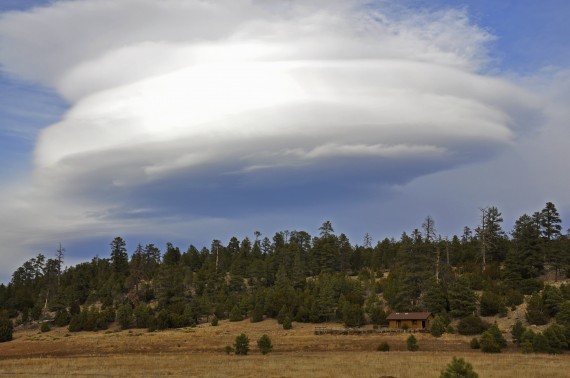 These clouds form in pockets of air trapped in the dips and valleys of mountainous terrain. It takes just the right mixture of moisture, temperature, and wind to make it possible for lenticular clouds to form. As damp air flows over mountain peaks, the waves of air carve out a pocket on the downwind side, and if the front side of that downwind pocket drops in temperature to the dew point, it could result in enough condensation to form a lenticular cloud.

The result is a lens-like, almost Whovian, appearance that sometimes even features illuminated edges and color variations, that leaves many scratching their heads, wondering, “What the hell is that?”

The stereotype some hold of those who report seeing UFOs frequently includes the witness being some rube who emerged from his corn field one night to see a light in the sky. In some places the stereotype is geared more toward weirdos living deep off the grid, atop some sprawling mountain range. When it comes to lenticular clouds being mistaken as UFOs, it could very well be rubes and mountaineers who are most likely to see them in the sky above their rural homes. They are the ones who typically live closest to terrain conducive to lenticular cloud formation.

The rarity of seeing such formations combined with general public ignorance of the existence of lenticular clouds, also make them a popular scapegoat when government agencies try to explain high-profile sightings.
One of the most famous UFO cases of all-time was infamously declared to be lenticular clouds.

The two key witnesses were a Lockheed engineer named Clarence “Kelly” Johnson, and a Lockheed test pilot named Rudy Thoren. On December 16, 1963, Johnson sees a dark object in the sky near his ranch in Agoura, California, but it vanishes only a minute and a half after he spotted it. The next day Johnson learns Thoren also saw the object in the sky during a flight the day before as well. Inside Thoren’s plane were another four witnesses who would later tell their experiences to investigators from Air Technical Intelligence Center at Wright Patterson Air Force Base.

It’s hard to tell what details were dug up during the investigation, if there ever even was an investigation, but the only official word from the government on file is the claim lenticular clouds could be the explanation to the Johnson, Thoren, and others’, UFO sighting.

That answer has not set well with UFO researchers, some of whom hail this case as one of the best examples supporting UFO visitations to Earth, due in part to the credibility of the eye witnesses, a pilot and a man who designed cutting-edge jet planes for a living.

Earlier this month a spectacular lenticular cloud formation resembling a Space-Invaders-style UFO popped up in the skies of Aberdeen, Scotland. Witnesses were reportedly doing double takes at the strange formation that just sat still in the sky while the clouds around it continued to whisk by it.

While the Aberdeen clouds earlier this month didn’t result in mass reports of UFO sightings, this isn’t always the case. Lenticular clouds are among the most common things in the sky confused with aircraft. It ranks right up there with weather balloons and meteorites.

Now I hope we never see someone in a Mysterious Universe t-shirt on television trying to convince the world a tuft of clouds are being piloted by aliens and are visiting Earth from another galaxy.