Long before HBO and voice actor John Kassir gave EC's favorite horror host his (arguably) definitive incarnation, the Cryptkeeper appeared in the form of Ralph Richardson in Amicus Productions' 1972 cinematic version of 'Tales From The Crypt'. Much like the 1980s/90s series, despite its title the film would draw its stories from across the entire EC horror line rather than solely relying on the pages of its namesake. While this was the first time that EC's stories were adapted for the screen, it was not Amicus' first foray into anthology horror.

Indeed, inspired by Ealing Studios 1940s classic 'Dead of Night' the company had achieved great success with titles such as 'Dr. Terror's House of Horrors' and 'The House That Dripped Blood' - although both the number of shared cast members (notably Peter Cushing and Christopher Lee) and prolific nature of the rival Hammer Studios meant that fans often wrongly attributed Amicus' output to them. 'Tales From The Crypt' shared the critical and commercial success of it's predecessors and so a sequel titled after the comic's sister publication 'The Vault of Horror' followed in 1973. In this article I'll be taking a look at the first of these two.

Perhaps the most readily noticeable change in Amicus' 'Tales From The Crypt' is in the Cryptkeeper himself. His personality has little resemblance to his comics counterpart and even less similarity to his later off-the-wall puppet form. For better or worse, he is a humourless and somber monk-like figure with an air of foreboding and dire warnings in place of the usual painful puns. While it's understandable that the studio may have felt a darker, more adult Cryptkeeper would be a better fit for a '70s horror crowd,  the gamble doesn't pay off and the segments, while generally strong, would have been more enjoyable with a more traditional GhouLunatic relishing events with sadistic glee. In any event, the Cryptkeeper would not return for 'The Vault of Horror'. 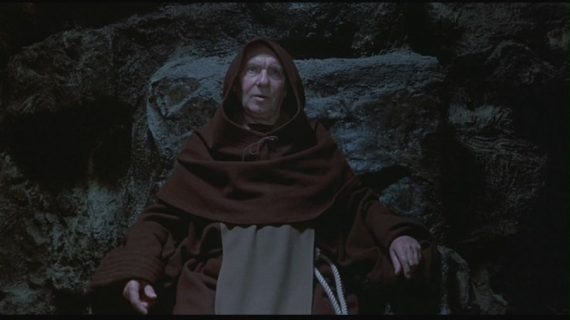 Back to the first movie, and rather than serving directly as host the Cryptkeeper appears in a framing story in which he is encountered by five tourists who are meandering through some old catacombs. One by one the Cryptkeeper leads them to a room to explain to them the possible  circumstances of their deaths which gives us our five cautionary tales. Its an interesting idea and works to a degree in that it gives the film a more cohesive feel than simply compiling five episodes of a series, however it is let down once again by this Cryptkeeper's dull, stone-cold personality.

Our first segment is '...And All Through the House', which coincidentally was also the first filmed episode of the HBO show. Here Joan Collins stars as the murderous wife who dispatches her husband to the hereafter on Christmas Eve. While planning to dispose of the body, she hears on the radio that an escaped maniac is on the loose - in fact, she discovers, he is right in her back yard dressed in a Santa Claus suit. Now she is faced with the problem of whether or not to call the police, knowing that this will mean exposing her own crime. It's a well directed segment - possibly better than the later adaptation, and Joan Collins gives a suitably unhinged performance. 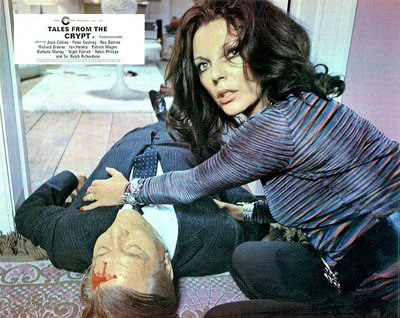 Next up, 'Reflection of Death', a rather more convoluted plot. Carl, played by Ian Hendry, has made the decision to leave his wife and run away with his mistress Susan (Angela Grant). As they prepare to drive off into the proverbial sunset Carl crashes the car, awakening in the wreckage with Susan nowhere to be found. He returns to his home where he receives a frosty reception for interrupting his wife canoodling with another man. He then goes on to Susan's where he is informed that two years have passed since the accident, in which she was blinded and he - cue dramatic music - was killed! Looking at his reflection for the first time he sees that it is true and he is a walking, talking, decaying corpse. The segment doesn't really work, though this is largely due to a hokey story and predictable twist-ending.

Things improve greatly with 'Poetic Justice', my personal favorite of the five stories. Peter Cushing stars as Arthur Grimsdyke, a kindhearted but lonely old bin-man who fills his days with his beloved pets and through entertaining local children. An upper class father and son, Edward and James however, consider Arthur to be a nuisance whose mere presence is lowering the tone of the entire neighborhood. They embark upon a smear campaign against him, stealing one of his dogs, getting him fired from work and even going so far as to suggest that he may be a threat to children.

Their cruel mission culminates on Valentine's Day when James sends Arthur numerous cards, purportedly from the neighborhood residents, filled with hateful verse deriding the old man and telling him how much they wish he would disappear (or worse). Able to stand no more, Arthur is driven to suicide - though in the EC universe of course, there is always retribution and one year later Arthur returns to exact his revenge. This is an excellent segment all around, with Cushing in particular a stand out. His portrayal of Arthur is so warm and earnest that his fate feels genuinely heartbreaking and of course, his gruesome revenge all the more welcome as a result. 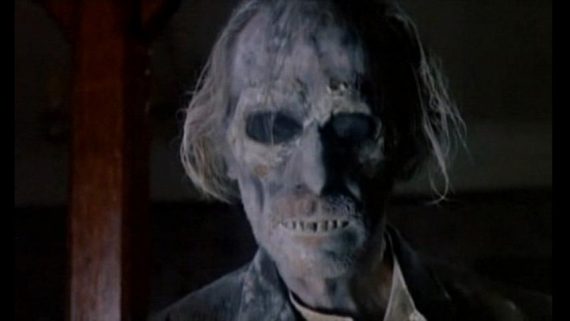 Our penultimate tale is 'Wish You Were Here', based on a 1953 'Haunt of Fear' story which in turn took inspiration from the classic yarn 'The Monkey's Paw'. In this version it is a Chinese figurine that grants the three wishes, on this occasion intercepted by Enid (Barbara Murray), the wife of failing businessman Ralph (Richard Greene). Naturally Enid first wishes that she had a fortune, and is delighted when her husband receives a phone call from his lawyer telling him he has a vast sum to collect. She is less thrilled however, when Ralph dies on his way to the office, with the lawyer later informing Enid that (as per her unfortunately worded wish) she has indeed inherited a fortune. It's time for some damage control, though Enid's choice of words lands her in hot water once again when she unwisely wishes that Ralph was back 'just the way he was before he died'. Ralph, we can assume, was also not too happy to be resurrected only to relive the moments leading up to his fatal heart attack. No matter though, one wish remains and what can possibly go wrong? Despite the subject matter, this story is played for laughs (Murray is especially amusing as Enid) and provides a welcome change of pace.

We close with 'Blind Alleys', in which Major William Rogers (played by Nigel Patrick) is instated as the new director at a home for the blind. Something of a penny-pinching Scrooge type, William quickly begins enforcing cuts on the home's budget, reducing food rations and heating while continuing to live in obscene luxury himself. He is also callous to the residents, treating them like dirt and ignoring their concerns to the point that one man dies due to the cold. Finally the residents have had enough, and begin constructing an elaborate and lethal maze which the Major must traverse while both figuratively and literally in the dark. It's an average segment and a mildly disappointing closer, particularly as it repeats themes from the superior 'Poetic Justice' which would have made for a far more satisfying conclusion. Things are not quite finished though, as the Cryptkeeper has a final surprise in store for our five protaganists - and perhaps even for us, the viewers.

While uneven in places, 'Tales From The Crypt' holds up well and despite having nowhere near as much gore, violence and sex as the TV series its surprising how similar in many ways these five stories play in comparison to the later episodes. If you're an EC fan or a classic horror fan in general, you're sure to find plenty to enjoy here.

Have you seen the movie? What was your favorite segment? Let me know in the comments below, and join me soon for a look at 'The Vault Of Horror'.