Although such things are less common today, in decades-past there were far more than a few UFO encounters in which the witnesses reported how their vehicles - whether cars, trucks, or even motorbikes -  were adversely affected by the presence of a UFO. Such events have become known in Ufology as "vehicle interference" cases. Typically, engines, lights, and radios are mysteriously affected by the presence of the unknown craft. Only when the strange vehicle exits the area does normality return.

One classic case that falls firmly into this particular category - and which will give you an idea of the nature of the phenomenon - was investigated by the British Royal Air Force Police in early 1962. In part, the now-declassified file on the affair states:

"Mr. Ronald Wildman of Luton, a car collection driver, was traveling along the Aston Clinton road at about 0330 hrs. on 9th February 1962 when he came upon an object like a hovercraft flying approximately 30 feet above the road surface. As he approached he was traveling at 40 mph but an unknown force slowed him down to 20 mph over a distance of 400 yrd., then the object suddenly flew off."

I could go on and on with numerous other, similar cases, but I'm sure you get the picture. Instead, I'm going to do something else - namely, I am going to offer data that suggests so-called vehicle interference events are not the work of all-powerful extraterrestrials, after all. Their origins may be much closer to home than many might suspect possible.

In 1957 - as documentation which has surfaced under the Freedom of Information Act shows - intelligence agents of the US Government interviewed a man who (and I quote from the official records), was "...born February 19, 1926, in the State of Warsaw, Poland, and was brought from Poland as a Prisoner of War to Gut Alt Golssen approximately 30 miles east of Berlin, Germany, in May, 1942, where he remained until a few weeks after the end of World War II.

"He spent the following years at Displaced Persons Camps at Kork, Strasburg, Offenburg, Milheim and Freiburg, Germany. He attended a radio technician school at Freiburg and for about a year was employed in a textile mill at Laurachbaden, Germany. He arrived in the United States at New York, May 2, 1951, via the SS General Stewart as a Displaced Person."

The document continues that at some point in 1944, while still a POW, the man was en-route to work in a field a short distance north of Gut Alt Golssen. A tractor - being driven to the field by a German - suddenly stalled on a stretch of road that ran through a dense, swampy area. No machinery or other vehicle was visible, although a noise was heard described as a high-pitched whine, similar to that produced by a large electric generator.

A German SS guard quickly appeared and talked briefly with the German driver of the tractor, who waited five to ten minutes, after which the noise stopped and the tractor engine  started normally. Approximately 3 hours later in the same swampy area, but away from the road where the POW crew was cutting hay, the source of the story surreptitiously observed a circular enclosure, approximately 100 to 150 yards in diameter. 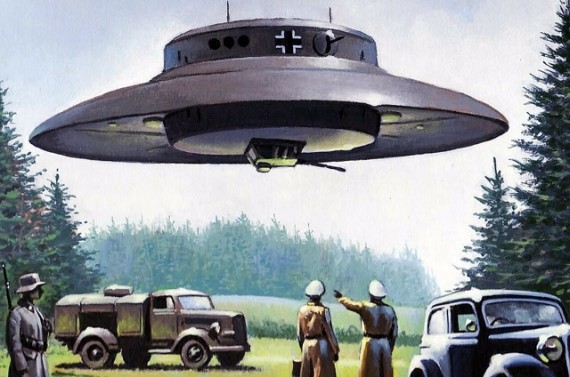 It was protected from full view by a tarpaulin-type wall, around 50 feet high, behind which a very strange vehicle was seen to rise slowly and vertically to a height sufficient to clear the wall. It then moved horizontally, a short distance out of the man's view, which was partly obstructed by trees.

According to the U.S. Intelligence files: "This vehicle, observed from approximately 500 feet, was described as circular in shape, 75 to 100 yards in diameter, and about 14 feet high, consisting of dark gray stationary top and bottom sections, five to six feet high. The approximate three foot middle section appeared to be a rapidly moving component producing a continuous blur similar to an aeroplane propeller, but extending the circumference of the vehicle so far as could be observed.

"The noise emanating from the vehicle was similar but of somewhat lower pitch than the noise previously heard. The engine of the tractor again stalled on this occasion and no effort was made by the German driver to start the engine until the noise stopped, after which the engine started normally."

Official records on this curious matter continue: "Uninisulated metal, possibly copper, cables one and one-half inch to two inches in diameter, on and under the surface of the ground, in some places covered by water, were observed on this and previous occasions, apparently running between the enclosure and a small concrete column-like structure between the road and enclosure."

The documents add that the area in question was not visited by the man again until shortly after the end of the war, when it was observed the cables had been removed and the previous locations of the concrete structure and the enclosure were now covered by water. The man stated to the interviewing intelligence agents that he had not been in communication, since 1945, with any of the other work crew of 16 or 18 men, which consisted of Russian, French and Polish POWs, and who had, the files note, "discussed this incident among themselves many times."

Here we have not just one, but two, cases of vehicle interference in 1944, seemingly provoked by the presence of a highly unusual, and very large, aerial vehicle of a definitive flying saucer-style. The implication, however, is that this engine-stalling technology did not originate in the domain of outer space, but with the Nazis.

Those who can't bare to think that UFOs don't have alien origins will likely dismiss the case, or label it as disinformation - chiefly because doing so will help them to sleep better at night and keep their belief systems (which also double as their comfort-blankets) intact. Too bad for them.

The fact is that the Nazis were indeed working on far more than a few highly advanced and unusual projects during the Second World War. Just maybe, as these particular files strongly suggest, one of those projects involved the development of a circular-shaped aircraft that employed a form of technology that had a side-effect of disabling engines.