Over the last week or so I've been taking a look at some of the strangest mainstream horror sequels of the 1980's. The 'Nightmare On Elm Street' series has its share of divisive entries, from the creative ('A Nightmare On Elm Street 3: The Dream Warriors')  and the self-referential ('Wes Craven's New Nightmare') to the depressing (2010's remake) and the ridiculous ('Freddy's Dead: The Final Nightmare', 'Freddy Vs. Jason'). All of the movies in the franchise have their fans and detractors, but it seems that none causes more controversy than 1985's 'A Nightmare On Elm Street Part 2: Freddy's Revenge'.

Perhaps the film is best known for its purported homoerotic subtext - and there's certainly enough persuasive evidence both within the movie and in subsequent interviews to suggest that this was likely intentional. But for myself and many Elm Street die-hards it's Wes Craven's lack of involvement and the way that Part 2 bends the rules of Krueger's powers that are the main points of discussion. Let's recap: the previous year's 'A Nightmare On Elm Street' had been a huge hit for New Line Cinema, brought to the screen by Craven with the help of some impressively creative low-budget special effects and an outstanding cast. Even though it had been a gamble for the studio which at the time was in financial turmoil, in retrospect its little wonder that the film was such a success. With the discovery of both one of the all-time great horror heroines in Heather Langenkamp as Nancy Thompson and one of the greatest bogeymen the silver screen would ever see in Freddy (the horribly burned child-murderer with the power to kill people in their dreams), word was bound to spread fast among teenagers bored with the standard kids-at-camp slasher formula. 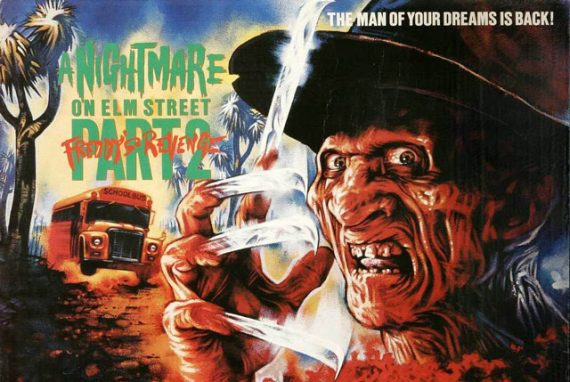 It seems New Line had already sensed that they had a blockbuster on their hands before the movie was even released, as Wes Craven's original happy ending was replaced at the last minute with the ambiguous (and far more sequel-conducive) closing moments of the final cut. Though Craven would return to the franchise at various points in the years to come, he originally had no intention of 'Elm Street' becoming a series and refused to participate in 'Freddy's Revenge' - a seemingly hastily put together sequel that would be in movie theatres in time for the following Halloween. Robert Englund returned, as he would for every film in the franchise to date with the exception of the (in my opinion terrible) remake, though Langenkamp was gone for the time being. 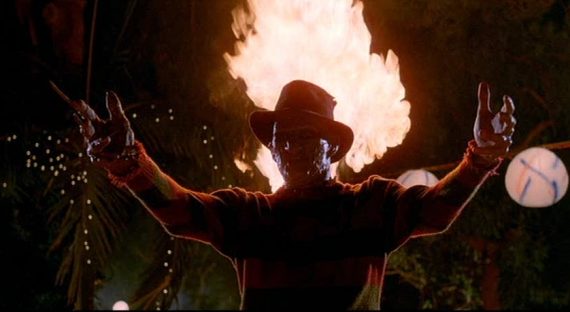 In her place we have Jesse Walsh (Mark Patton), a teenage boy who's family moves into Nancy Thompson's old place. Soon after, Jesse begins having nightmares in which Krueger instructs him to kill for him. When Jesse's girlfriend Lisa discovers Nancy's old diary recounting her experiences, they start to put the pieces of the Elm Street legend into place, with Lisa discovering the location of the power plant where Freddy committed his original crimes. Of course as in any good movie, the parents (despite witnessing such bizarre and presumably Freddy-related phenomena as an exploding parakeet in their kitchen) pay no heed to their children's worries and the pair are left to fend for themselves.

While walking the streets one night in a sulk at his understandably trying circumstances, Jesse happens upon what certainly appears to be a stereotypical gay bar. While trying to buy a drink he is spotted by his gym teacher who bizarrely instructs him to go to school and run laps. Even more bizarrely, Jesse seems to accept his leather-clad coach telling him to go to school in the middle of the night and take part in some impromptu solo track and field practice as normal protocol. Perhaps if this had been established as a dream sequence it would have made sense, but we are clearly shown that this is taking place in the real world so your guess is as good as mine. At any rate, while Jesse hits the showers his gym (and apparently self-appointed life-)coach returns to his office. Various balls and gym equipment begin hurtling towards him and he is then dragged (in a manner similar to the famous bodybag-in-the-corridor scene from Part 1) to the steam-filled showers where Freddy awaits, killing him with his trademark glove. Once the steam clears however, we see that it is in fact being worn by a terrified Jesse. 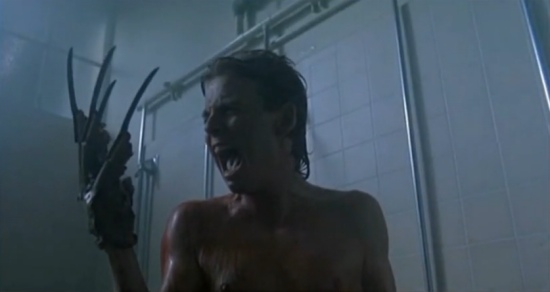 As he continues to have visions of Krueger, Jesse correctly assumes that he has become a danger to himself and others. After a clumsily failed attempt to make out with Lisa, he enlists the help of his friend Ron (Robert Rusler) to watch over him while he sleeps. Unfortunately for them both, Ron pays little mind to his friend's warnings and once Jesse is asleep, he too opts to hit the road to dreamland. Then, in one of the most impressive special effects sequences in the entire series, Freddy literally claws his way out of his young protege, awakening Ron only to gruesomely send him to the big sleep. Once more, as Krueger looks in the mirror the reflection tells us that it is in fact Jesse carrying out his bidding.

And so we come to the pool party scene - the source of most of the ire directed at the movie. A now near-hysterical Jesse runs to see Lisa (who is holding said soiree) and she tries to console him and calm him down. Krueger takes hold of Jesse once more however and tries to attack her before running out to the pool and going on a killing spree. The problems with this whole sequence of events are pretty clear. Firstly, something about seeing Freddy in his full form rampaging through the waking world doesn't sit well. It also raises questions about the film's overall concept - why would someone who can kill people in their dreams need to possess somebody to kill for them in the waking world? If this is the real world, why do the partygoers seemingly see Freddy rather than Jesse? While I suppose the idea of the killer from your dreams finding his way into reality could be terrifying, it also demystifies Krueger and turns him into the very thing he was created as a reaction to - the standard, dull weapon-wielding slasher villain.

While the film has some good moments, unfortunately it continues downhill from here and I don't think I'm spoiling things too much when I say that the climax features without doubt Freddy's most pathetic death of the series (even surpassing the terrible 3D pipe-bomb mess of 'Freddy's Dead') - I'll simply say 'killed by love' and leave it at that. There's a half-hearted attempt at a cliffhanger, very similar to the tacked-on one from Part 1, but its an unsatisfying end.

As for the homosexual elements of the movie - the gay bar, the gym teacher, Jesse escaping to his male friend's house after failing to woo Lisa  - it seems pretty clear cut and in fact makes the movie more interesting as a result. After all, horror movie tropes have been used as allegories for the confusion of young sexuality since the teenage werewolf B-movies of the 1950s, if not earlier. The fact that 'Freddy's Revenge' can be interpreted this way without ever overtly mentioning the matter is to its credit - though if it is indeed intentional, (a matter on which various cast and crew members have had differing opinions over the years) the idea that Jesse's true feelings should manifest themselves as an undead psychopath who can only be redeemed by the love of a woman seems more than a little backward-thinking. 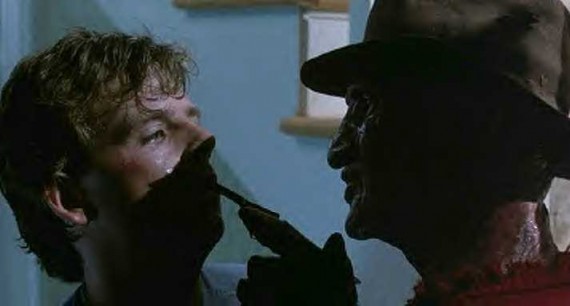 Nevertheless, the movie returned ten times its budget domestically, so a sequel was once again inevitable. Fortunately things would improve greatly with 'A Nightmare On Elm Street 3: Dream Warriors', my personal favorite film of the series. For more on 'Freddy's Revenge' however, I highly recommend the documentary 'Never Sleep Again' which features hours of entertaining and informative interviews with the people behind the entire series.

What's your take on 'Freddy's Revenge'? Let me know in the comments below.