Have you ever noticed whenever someone brings up the subject of blood sacrifice the first animal nominated for death is the chicken? I hate starting this piece out with a question framed in such a Seinfeldian way, but to date that’s been my observation, and I’ve always wanted to know why these birds are so often singled out as a substitute wrath bearer in so many different religions around the world. So I fired up my magic box of digital divinity, and ritualistically stroked its keys until the answer was revealed. It turns out a Jerry Seinfeld reference is relevant in more ways than just my need to make an observational statement.

Practitioners of Santeria, Voodoo, Judaism, and many more, make use of chicken sacrifices for varying reasons. Some faiths make use of the practice frequently, while others, like Judaism, only ritualistically kill chickens during specific holidays.

For example, Jerry Seinfeld, who has made his jewish heritage part of his comedic performances, might participate in Kapparot, which includes a killing a white rooster on the afternoon before Yom Kippur to expiate his sins. The ritual is based the verse Isaiah 1:18 of the Hebrew Bible. Among the reasons it is believed chickens are used, is the similarity between the Aramaic name for a chicken and the Hebrew word for man, “gever.” In this practice, the chicken becomes a sacred vessel representing man. 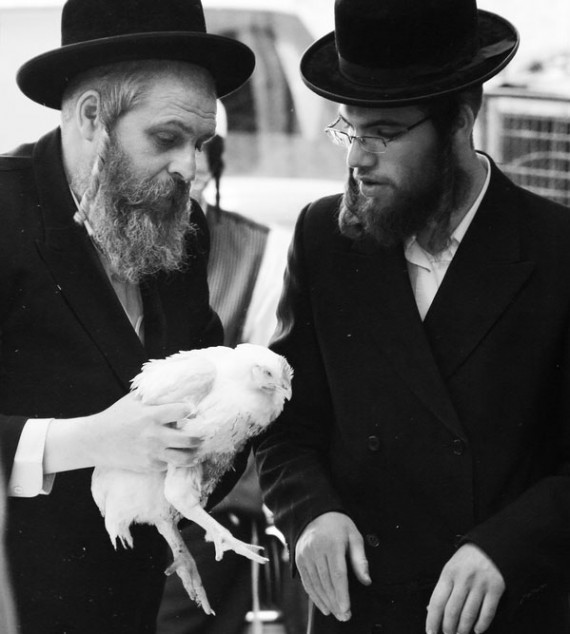 In some parts of India mandirs dedicated to the Shakti school of Hinduism also participate in sacrifices involving chickens. The sacrifices are practiced as a means of appeasing the goddesses of empowerment and war, Kali and Durga. The chickens are killed by either chopping off its head with one blow, piercing its heart with a spike, or asphyxiation. During the three-day festival of Gadhimai in Nepal, hundreds of thousands of animals, a high percentage of which are chickens, are sacrificed. The festival annually draws millions of attendees.

It’s no surprise that two of the genetic ancestors to today’s domesticated chickens, the red jungle fowl and the gray jungle fowl, called northeastern and southern India home centuries ago.

The practice of Santeria is growing in places like the United States, and blood sacrifices are sometimes used in its magic spells and other rituals. In some cultures where Santeria is popular, it is not unusual to see headless chickens hanging in the doorways of homes, on the steps of courthouses, or other government buildings, as part of a spell to protect against being declared guilty in court proceedings. In the US practitioners of Santeria faced religious persecution in some areas because of the role animal sacrifice plays in the religion, and were finally granted constitutional protection by the US Supreme Court.

In the west African nation of Mali, a predominantly muslim state, there are some pockets of villagers who still adhere to their ancient cultures. One practice, reported by foreign aid workers, involves cutting the throat of a chicken and interpreting the answer by the way the chicken falls over dead. If the chicken falls to the left or right, the question at hand has received a favorable response. If the chicken falls straight forward and dies, then it is perceived as a negative answer. This practice was disrupted when aid workers introduced imported Rhode Island Red chickens to the area as a replacement for the much smaller native birds used for centuries. The imported chickens, engineered over time to have large, meaty breasts, never fell to the left or to the right. The big-breasted birds always fell face forward into the dirt.

In the practice of Voodoo it is believed spirits rely on humans for nourishment and they experience rejuvenation when a life force is offered to them via sacrifice. The loas, or Voodoo spirits, are often offered sanctified chickens during Voodoo ceremonies. Worshippers at these ceremonies are often blessed by loas who take control of them by what could be described as possession. While in this state the possessed receive advice, cures, and even insights into the future from the controlling loa. 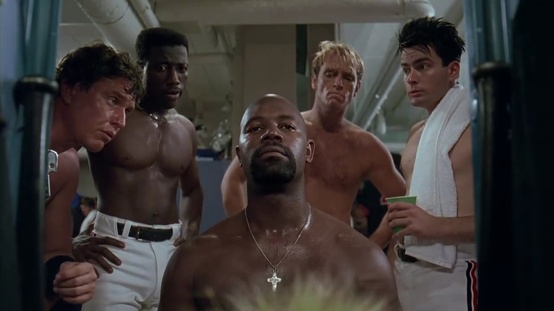 In the film Major League, Pedro Cerano, who worships a god named Jobu, for whom he requests a chicken to sacrifice so Jobu will remove fear of the curve ball from his baseball bat. His teammates bring his a bucket of fried chicken, but the effort fails. While this story is entirely fictional, it is a good example of the concept behind religions requiring sacrifice. No blood equals no good.

Even in the modern Christian world, particularly in the southeastern US, it could be said chickens are sacrificed and then fried as an offering to a preacher who stops by for Sunday dinner. Sure, to call it a sacrifice might be a stretch because in modern society most peopl buy their chickens pre-killed at the grocery store, but serving fried chicken when the preacher comes to visit is common in the region, and that has to count for something. Right? 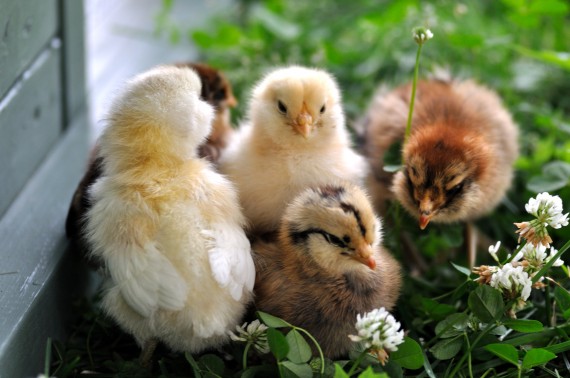 So why all the chicken sacrifice? Just ask a chick and it’ll tell you.

Chickens are relatively inexpensive and abundant around the world, and for that reason, they make great subjects for use in rituals, especially in areas known for being economically depressed. Also, chickens make a tasty meal afterward if the particular ritual permits it to be eaten at its conclusion.

In some cultures the chicken is, or at least was at some point, actually held in high esteem. Hens have commonly been viewed as symbols of fertility throughout history, and roosters have often been used as symbols of virility. The Egyptians would hang chicken eggs in their temples to encourage a fruitful flood season.

The Romans even respected the power of the chicken. During wartime, they used chickens to predict the outcome of battles. If the chickens showed signs of a healthy appetite, they were confident it meant a victory would follow. In one of Cicero’s works, he told the story of an impending sea battle that took place in 249 B.C., where the fortune telling chickens on board the ship refused to eat and the consul subsequently threw them overboard because of it. The Romans would go on to lose that battle. 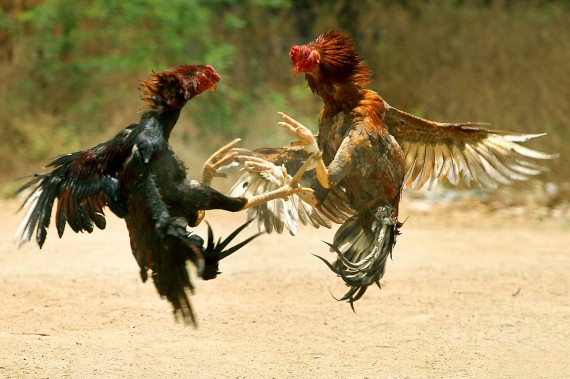 Another possible reason for the chicken’s popularity in religious circles could be its fierce, competitive nature. Long before chickens became popular cuisine, they were popular for the purposes of sport. A millennium before chickens would become popular as food throughout the world, they arrived in Egypt primarily as fighting birds. They proved so popular, that some royal tombs are adorned with artists renderings of them. It was the fighting spirit of chickens that first inspired the Romans fascination with them.

The chicken’s prestigious history and importance in some religions will likely be overshadowed by its popularity as cuisine. The one exception to this might be the insane amount of chicken consumed on one specific day in the US. 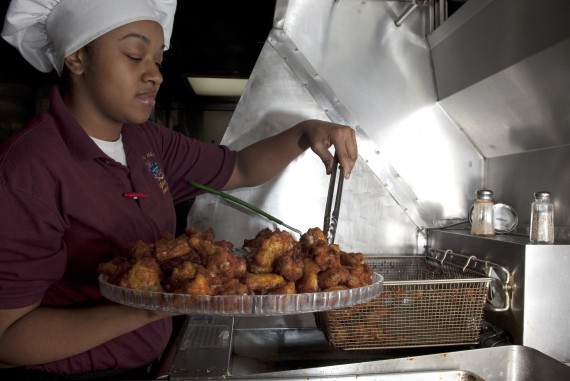 In 2012, an estimated 1.25 billion chicken wings were consumed during the Super Bowl. Should a catastrophic digital crash erase hundreds of years of recorded history, archaeologists might misinterpret the relationship between chickens and sports fans.

“Ancient American cultures sacrificed chickens en masse and ate them in conjunction with an annual, ritualistic sporting event in which armored men fought over an inflated, oblong-shaped leather ball, which when bounced and rolled in ways that mimicked a chicken being chased around a 19th century barnyard,” the future archeological study might say.

The amount of wings consumed on Super Bowl Sunday is a sacrifice to the gods of commerce of slightly more than 250 million chickens. Annually, approximately 25 billion chicken wings are consumed by US diners, which is about 70 wings for every man, woman, and child in the country.

Chickens might be known for being simple-minded, and easily hypnotized, but the answer to my question about the reason behind them being commonly chosen as sacrificial animals in some religious practices is simply not so simple.

The chicken’s easy domestication and abundance make them an economical choice for such things, but its long history of symbolism among some cultures also plays a role in the yard bird’s popularity as a sacrificial subject.

The one concrete conclusion I reached in my quest for answers to my chicken query is that no matter where you might live in the world today, it would really suck to be a chicken.