In the Pre-Podcast World, Paranormal Chat was on Vinyl

Once upon a time, there were no such things as a podcasts, there were only a handful of television channels available for viewing, and if you made a movie the only place to see it was in a movie theater. Back in those days the subjects like the occult, UFOs, and non-Christian spirituality, were not as readily available to mainstream culture as they are today. Aside from being guests on the few rogue radio shows discussing paranormal issues in those days, where they were often ridiculed, those who dedicated their lives to paranormal or occult ideology, did find at least one way to spread their ideas their way –– phonographic records.

A decade ago one had to virtually had to give vinyl records away to get rid of them, but a recent resurgence in the medium’s popularity has changed that. This trend has made it much easier to find those rare, underground records, especially those about the paranormal and the occult.

In some ways these records were the original podcasts. The spoken word recordings were produced by people passionate about very specific subject matter, and they wanted it presented to the public in a specific way. In most cases, you won’t find these old-school podcasts for download on iTunes, but with a little effort you can find the vinyl online.

With that in mind, here are a handful of classic, occult-related records from the podcasting days of yesteryear that might tickle your eardrums just enough to force a smile to invade your face with Orson-Wellesian fervor. And that, my friends, is truly magical.

(Where available, I’ve included links to each record’s information on Discogs, a collector-compiled database of vinyl recordings, for those interested in track listings, catalog numbers, and other details.) 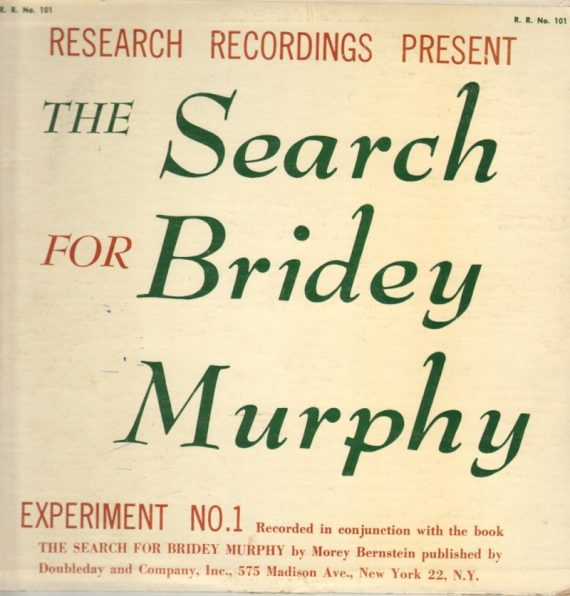 Colorado housewife Virginia Tighe ignited a pop-culture sensation when she claimed to have been a 19th-century Irishwoman named Bridey Murphy in a previous life. The revelation emerged during a regressive hypnosis session with Mory Bernstein in 1952. Under hypnosis, Bernstein walked Tighe back to her childhood, and then asked what she could remember before birth.

By 1956 when a recording of Bernstein interviewing Tighe under hypnosis was released on vinyl, Bridey Murphy was already a pop-culture icon. A popular song called For the Love of Bridey Murphy had already been released, complete with a Bridey Murphy dance, and the film, The Search for Bridey Murphy, came out the same year. While the record was likely just an effort to cash in on the success of the movie of the same name, it doesn’t diminish the fact that it is a recording of an alleged hypnosis session, though in subsequent years its legitimacy has been heavily criticized.

American Society for the Occult Sciences How to Develop Your ESP and What is Witchcraft? (1973)

Well-known paranormal researcher Hans Holzer narrated this recording originally only available as a gift to those who became charter members of the American Society for the Occult Sciences. Holzer’s most well-known adventures was his in-depth investigation of the Amityville house made famous first by Ronald DeFeo, Jr., and later in a series of successful horror films. Holzer investigated the property in 1977, and claimed it was previously a native-american burial ground whose spirits compelled DeFeo to murder his family. In the American Society for the Occult Sciences recording he awkwardly reads through a series of ESP tips and a simplistic, encyclopedia-like explanation of witchcraft in his slightly Austrian-influenced accent. 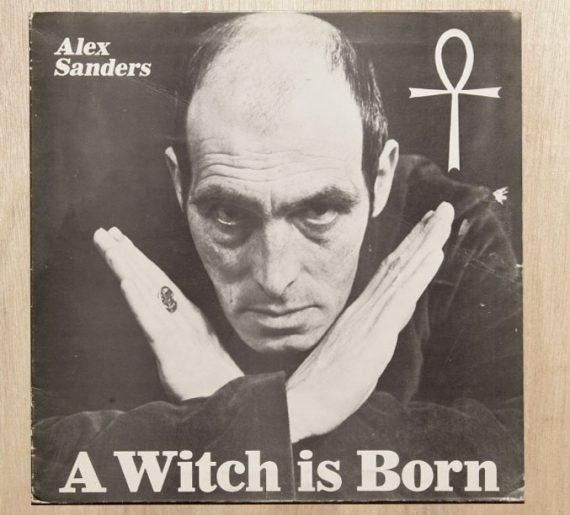 On this record the founder of Alexandrian Wicca, Alex Sanders, performs an initiation ceremony of an incoming Wiccan to his coven. Sanders was no stranger to media at the height of his popularity. He was always quick to volunteer for interviews, appear in documentaries, and just be seen in general. So his foray into the world of recording is no surprise.

"Alex Sanders is the most powerful witch in Britain. Here, for the first time, he presents a full recording of the solemn initiation of a new member into the ancient Craft." (Stewart Farrar - Liner Notes).

This record features lots of over-dramatic voices, lingo, and more.

It should be noted some in the Wiccan community appear to have a great deal of contempt for not only Sanders, but the depictions of ceremony on this record. At least, that the impression I came away with by reading comments and discussions during my research on this one. Whether the record is more about production and entertainment value than accurate depiction, it’s still an interesting listen. 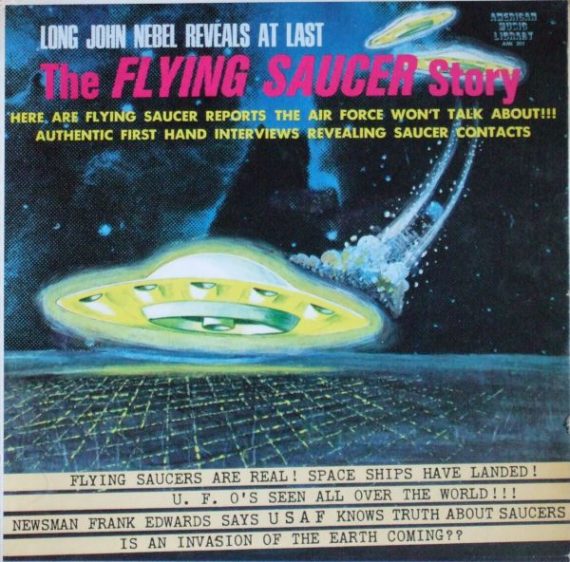 Before Art Bell there was Long John Nebel, a New York based radio personality who gained a cult following of loyal fans from the 1950s through the late 1970s by discussing UFOs, psychics, and other outside the mainstream  topics. On this record, Nebel recounts numerous “yoofow” tales, accentuated with his Paul-Harvey-like cadence.

Among the interviews on the record is one with George Adamski, famous for his numerous UFO sightings and alien encounters in the late 1940s and early 1950s. Adamski tells his story of meeting an alien in the first interview on the record.

After Nebel asks whether the alien could speak, Adamski admitted that he could, but the pantomime exercise was just an alien test to evaluate his ability to communicate. The alien then asked Adamski if he could use the phone. Not really, but the story is so wild that detail would not seem out of place. 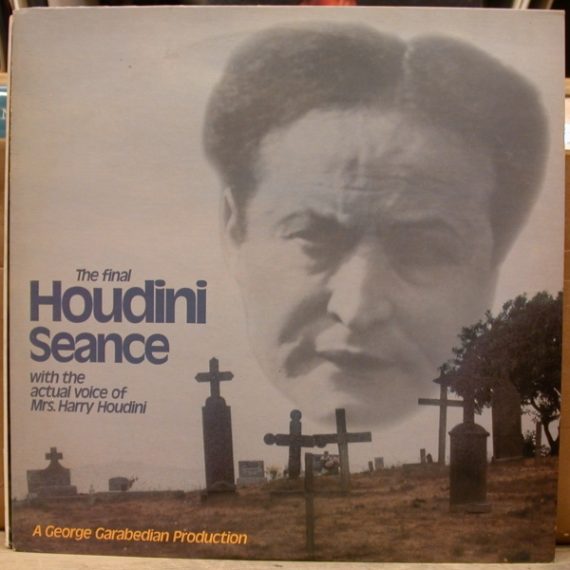 It’s nearly October 31, the anniversary of Harry Houdini’s death in 1926, so what’s more fitting than including a recording of the Oct. 31, 1936, final attempt by Houdini’s widow to contact her husband on the other side via seance.

The recording Literally starts with a lot of Pomp and Circumstance, overlaid with melodramatic narration describing the setting, which happened to be atop a skyscraper in Hollywood, California. In fact, there is about 15 minutes of scene setting, and pontificating about Houdini before the business of attempting to contact him even begins. Most of it sounds more like a church service than a seance, but the classic, stage-actor style deliver of the message gives it character.

Houdini promised to deliver a message to his wife from the other side in code if possible, but during that decade, no contact was ever made. 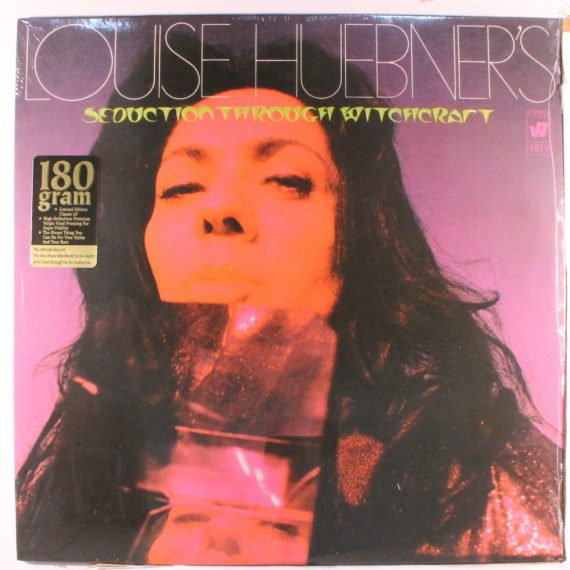 Sometimes called The Official Witch of Los Angeles, Louise Huebner recorded this how-to record during the height of the free love movement in the US. The recording includes ritual details for accomplishing multiple tasks relating to love, like The Turkish Bean Spell for Tender Love, Orgies-A Tool of Witchcraft, The Demon Spell for Energy, and more.

Huebner describes everything in a sexy, whispery tone, enhanced with a mild echo feature, giving it a nice ambiance. It’s the perfect companion to a hot bubble bath and a bottle of wine.

If you get this record and try to follow along at home, be sure to heed Huebner’s warnings about the power of the spells she presents. When it comes to love, a safety-first approach is always prudent. 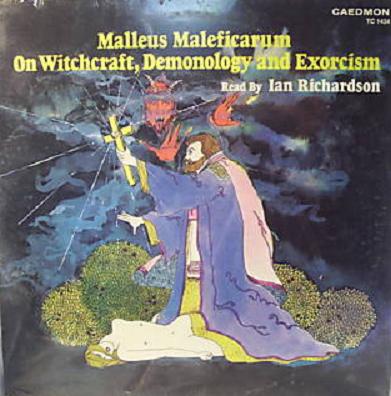 The Malleus Maleficarum was essentially the witch-hunter’s bible back in the late 1400s. Translating to “Hammer of Witches” the book set out to not only prove the existence of witches, but to dictate how to identify one, and what to do with one once you did. Published shortly after the invention of the printing press, the book swept through Europe like a plague for decades, despite even the Inquisition’s condemnation of it’s validity.

On this record, the Shakespearean trained, scottish actor, Ian Richardson, reads a translated version of the Malleus for your listening pleasure. Having not heard a single track from this recording, I can’t describe it, but with Richardson reading it, I’m sure it’s enthralling given the Shakespearean-style English of the translation.