In a world in which all things of a zombie nature are becoming ever more dominating, the biggest of all challenges facing film-makers, Hollywood studios, script-writers and authors is not so much just to come up with ideas, but to create and weave storylines that are actually fresh, rather than merely being deja-vu-like and yawn-inspiring.

Certainly, one only has to take the merest of all glimpses at the large amount of both literary and on-screen productions of the undead variety to realize that tedious repetition, overwhelming sterility, and far less than inspiring scripts are, today, all too often the name of the game - aside from (in my own personal opinion, at least!) AMC's The Walking Dead, which continues to fly the flag of quality and originality.

In other words, when it comes to the rise of the recently deceased, we have - for the most part - seen it all, read it all, and heard it all, time and time again. Fortunately, however, that is not quite always the case. Take for example, Chris Ryall and Drew Moss’ newly-published graphic-novel series The Colonized: Zombies Vs. Aliens, for which I was invited to write the Introduction (and I did write it!). 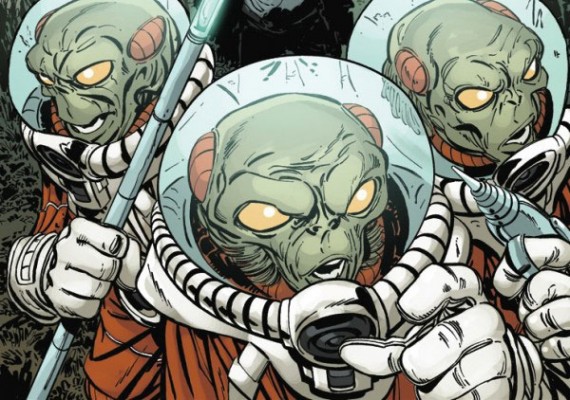 For Ryall and Moss, your average, zombie apocalypse-style, splatter-fest is simply nowhere near good enough. And while that may not be such a positive thing for the wide and varied cast of characters of Carbon Falls, Montana who are fighting for their very lives and souls, for you, the reader (or, perhaps, given the circumstances, the devourer would be far more apt terminology), it is very good news indeed.

While it is one thing to have to face a full-on, maniacal assault from hordes of flesh-munching and bone-crunching reanimated corpses, it is an entirely different matter to insert nothing less than visiting aliens from a faraway world into the story, too. But, this is exactly what our intrepid duo of Ryall and Moss does – and in a fashion that works very well, it must be stressed. Indeed, if you thought that Roswell, New Mexico was the only place where extraterrestrials have displayed really crappy piloting skills, then you’re dead wrong.

Add to the ever-growing hordes of the risen dead and the slightly hopeless extraterrestrials a cast of survivalist fruitcakes, separatists, gun-toting gangs, and a somewhat sinister government agent near-endlessly lurking in the shadows, and you have a great story unfolding before your very eyes.

It is most refreshing, too, to see a high degree of thinking outside of the box taking place. I certainly won’t give away the plot of The Colonized (which was originally published in 4-parts earlier this year) but, suffice to say, there is a nice touch about how the aliens themselves – or their unearthly biology, to put it correctly – directly impact upon the nature and effects of the zombie virus. 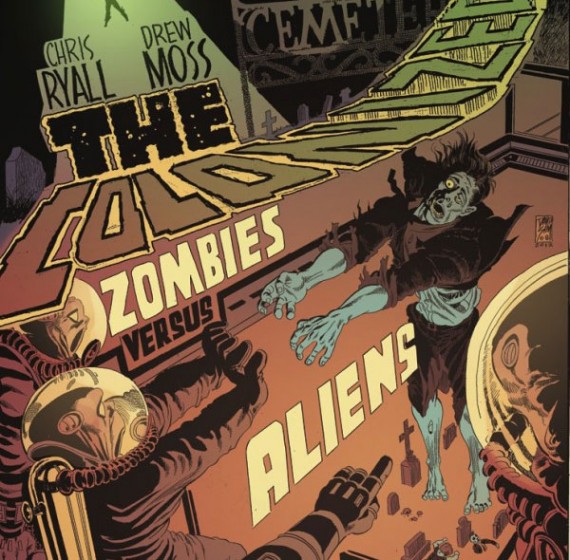 Sly and wry humor abounds throughout the pages of Ryall and Moss' work. And we even get treated to the freakishly fun sight of not just human zombies, but the animals of the undead, too. Of course, the fact that The Colonized is set in small town USA means that we are talking specifically about farm animals. Or, perhaps: Barn of the Dead would be a better way to word things.

Have you ever seen a cow, a pig, a chicken, or a horse wildly racing and raging around like the fast-running infected of 28 Days Later? To be sure, it’s not a pretty sight, to say the very least. But, for the reader, it is undeniably highly entertaining.

As is always the case when fiction and zombies cross paths, things finally reach a bloody and gore-filled finale, and it all too quickly becomes a case of do or die – and that goes for both the humans and the aliens alike. Hell, even the dead do all they can to avoid death – for a second time around, needless to say.

And I can safely state all of the above without giving away the many and varied intricacies of what is a finely crafted plot of massively entertaining proportions. In finality, The Colonized: Zombies Vs. Aliens is a decidedly surreal, alternative and fun take on a topic that brings something very welcome and important to the table of the reanimated and the cannibalistic: it’s called originality.

If only the same could be said for those many and predictable pieces of cheaply made "trash of the dead" movies that turn up on certain TV channels that really should know much better. Hopefully, and when it comes to the specific matter of zombies, we will hear much more in the future from Chris Ryall and Drew Moss. Until then, however, enjoy The Colonized. Having done so, however, you may never wish to eat pork, beef, or chicken again.

And it just might be a very good idea to avoid the aliens, too...