If you are someone who is adamantly of the opinion that there are grounds for belief in the general UFO phenomenon, then chances are good your beliefs have been challenged at one point or another. Some people engage in such challenges and provide what they believe to be the most convincing evidence in an attempt at convincing the doubters, while others remain passive, content with what they believe and unconcerned with the contrary or indifferent beliefs of others around them. No matter where you may fall in this spectrum, one thing remains inevitable when considering the foundation of your belief in this phenomenon: what, to the public knowledge, is the most compelling, available evidence to support the reality, if any, of this phenomenon?

As I have said in the past, the social stigma surrounding the UFO phenomenon has severely impeded any serious research or further understanding/exploration of this topic by scientists, academics, and many other curious, professional parties. I think one of the biggest aspects of the phenomenon affected by this impediment is that of available evidence to the public, and lack of motivation for general thought and contemplation on the topic.  As such, the purpose of this article is to present what I believe to be some of the most compelling evidence in an effort to reinforce the fact that there is indeed a small but significant amount of  hard evidence to support the existence of intelligently controlled, unidentified flying objects.

When the average person researches anything pertaining to the subject of UFO's on the internet, they are met, more often than not, with a trove of bad information from sources where anyone with an internet connection can post their own accounts, upload doctored images and videos, etc. I think this is unfortunate because it greatly outnumbers and overshadows what should really be considered: evidence, including testimony and media,  from commercial and military pilots (as well as the military in its entirety), astronauts, and even  government agencies such as NASA.

I believe these are the highest caliber sources when looking for evidence of the UFO phenomena because ultimately they conduct their business and affairs at the highest standards, demanding highly professional and diligent work ethic in a very stern, no-nonsense environment. Even though such testimony from pilots and astronauts is still technically just one person's account, I think there are obvious qualifications which differentiate them from all other allegorical evidence, but that is a topic for another article. For me personally, one of the most convincing collections of evidence comes from the testimony and associated media from NASA space missions, particularly the NASA Space Transportation System (STS) missions.

The STS missions themselves were simply all the missions from 1981 to 2011 that were flown by space shuttles, so there is a large variety in the purpose of each mission. Regardless, there is so much to look at regarding these missions that it is hard to know where to start. You could begin by searching Youtube for many of the original footage from some of the STS missions, including, but not limited to: a breakdown of the STS-75 tether incident (though you'll have to deal with the cheesy background music); the STS 48 abrupt turn footage, the STS 114 footage of multiple objects maneuvering/changing directions, or you can opt for (in my opinion and, again, despite the cheesy production effects and music) the best compilation of STS mission anomaly footage available.

It is important to have a balanced perspective when looking at the aforementioned material. What that footage shows is extraordinary and according to many, remains unexplained. However, it would be naive to simply believe at first glance that this is the smoking gun evidence for the UFO phenomenon. In fact, explanations have been put forth to account for what is actually being caught on camera... well at least for some of the objects in the footage. Popular Mechanics magazine published an article regarding the truth behind this purported NASA UFO footage. Here is an excerpt from Thomas Jones (STS mission specialist) that I think best accounts for the position taken by those who do not believe there are any UFOs being recorded in this footage:

"Lacking quality in their evidence, UFO believers are left with quantity, a rambling collection of indistinct imagery and allegations that now includes a batch of space shuttle mission video clips that were never buried or classified in the first place. Runco points out that astronauts, in general, are excited by the notion of intelligent species on other worlds. "Many of them use [email protected] [a distributed computing application that picks through radio telescope data for incoming messages] as their screensavers, because they think it's a possibility," he says. But it's one thing to believe that alien life is a statistical likelihood, and another to interpret lights in the sky as intergalactic contact. "People see unexplained things," Jones says. "I used to believe UFOs were spaceships--when I was 14."

He isn't wrong, at least about the taken-out-of-context part; all you have to do is look at various recirculated videos with titles like "UFO dodges death ray", or "proof of UFOs in outerspace!!!". It's the internet, after all... it is littered with garbage. However I think Jones is being ignorant and easily dismissing what is otherwise very compelling evidence from a serious standpoint. Some of the explanations to debunk this footage (such as the UFOs being mistaken for ice crystals being moved by engine thrust, space shuttle parts being mistaken for UFOs, or even UFOs being mistaken for other space debris that is simply out of focus on the camera ) may hold ground and apply to some of the objects in the footage. But can that really encompass the entirety of the anomalies? 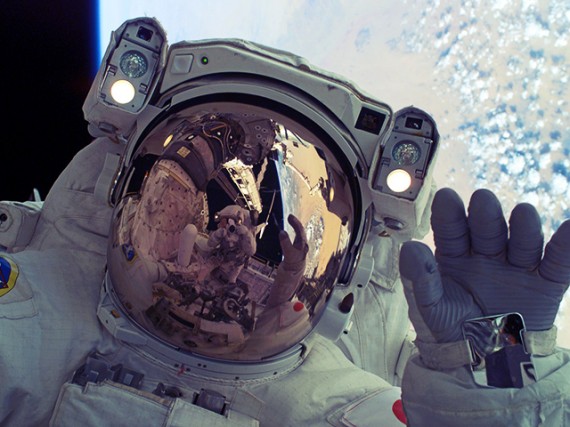 There are several occurrences in the footage where these objects make hard turns, increase and decrease in speed, etc. essentially executing intelligent maneuvers. Can ice crystals do that in a Newtonian universe? I'm not sure, but common sense tells me it isn't likely. Fortunately, some people like Lan Fleming took great lengths to write papers raising objections to the  explanations provided by NASA, Jones and other debunkers of the STS missions (See also Mark Carlotto's paper independently supporting Fleming's claim that a thruster firing could not account for the activity observed in the STS-48 abrupt turn video).

In the end, I think it is very important to carefully examine the explanations provided for these videos, and bring attention to the fact that they even exist. If more attention is brought to them, and as a result brings about greater public awareness, then perhaps greater scrutiny can be applied and we can know once and for all what the reality of these anomalies are. All it takes is one of those objects to be unidentified (and admitted publicly) in order for a more widespread, serious approach toward this footage. I really can't wrap my head around the fact that someone can confidently explain every anomalous aspect of that footage and dismiss everything else as more or less unintelligible. All in all, though, I still stand by the opinion that all of the aforementioned footage is some of the most compelling evidence for the UFO phenomenon, and one of the most effective references for unhinging the truth embargo.